For a host of reasons, the post of organist at the First United Methodist Church of San Diego has always been one of the area’s plum positions. The congregation’s striking modernist building has been a Mission Valley landmark since its construction in 1964, and the massive L. W. Blackinton pipe organ filling the rear gallery and both sides of the altar area is about as complete and versatile an instrument as any concert organist could desire.

Stephen Price, the most recent distinguished musician to hold the First Methodist position, gave a recital Sunday, May 7, on the church’s organ, assisted by saxophone virtuoso Todd Rewoldt. The unusual piece they performed together, Canadian composer Denis Bédard’s Sonata No. 1 for Alto Saxophone and Organ, is what drew me to the recital. 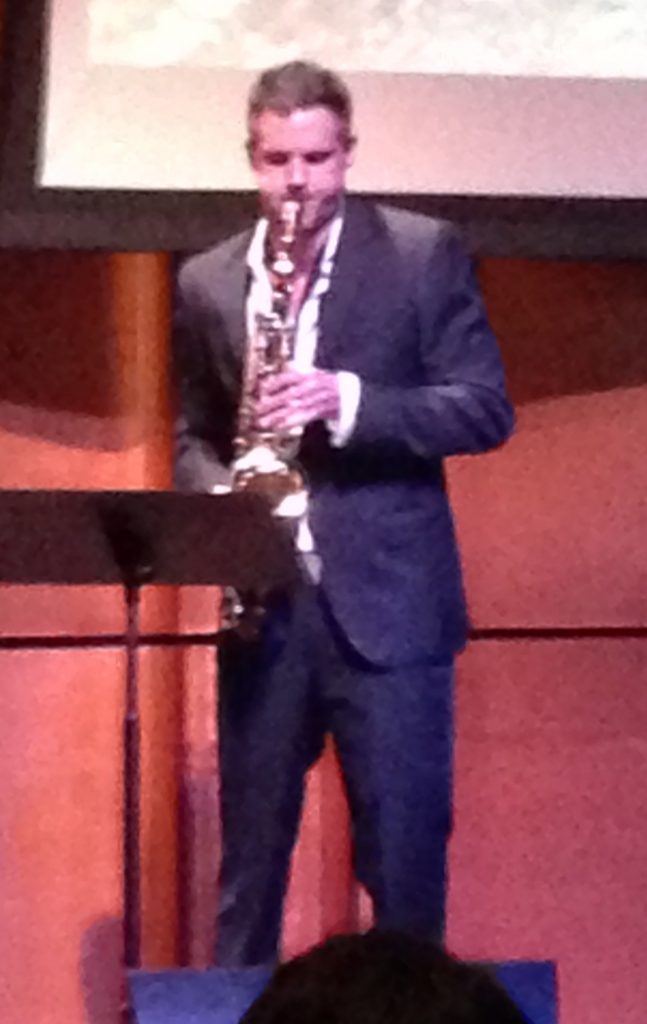 Since most organs are found in churches, when a composer decides to write for organ and other instruments, the choice of “other” instruments tends to be limited to what people are accustomed to hearing in worship: strings, solo trumpet or brass choirs. Since Bédard is associated with the Roman Catholic cathedral in Vancouver, B. C., I thought the choice of saxophone with organ was a bold one.

I found his three-movement Sonata as bold as the composer’s choice of alto saxophone—sections in which each performer challenged the other with volleys of densely layered, rapid virtuoso figurations interspersed with lyrical adagios. Although Bédard’s idiom remains decidedly tonal, the complexity of the fast sections avoided any sense of easy predictability.

The middle movement sounded like an aubade, with Rewoldt crooning sweet, sustained themes saturated in his most seductive vibrato. I was surprised how powerfully the saxophone’s lowest range carried in the large church sanctuary. Price chose among the ample tonal resources of the organ to provide an appropriate undulating, lush accompaniment.

Like the opening movement, the vivace final movement sported athletic, explosive themes surrounding a slower, bluesy center section to indulge the saxophone. Bédard’s work proved an exhilarating experience in the hands of such polished performers. But as small children are warned at the circus: don’t try this at home!

Price opened his recital with Nicolaus Bruhns’ extroverted, somewhat mannerist Praeludium in G Major, a work whose animated fugue subjects and myriad echo effects proved an ideal match for an instrument with many contrasting divisions. Price’s articulation could not have been cleaner, and his pedal solos came off with the splash Bruhns intended. A respected organist-composer of the generation prior to J. S. Bach’s generation, Bruhns and Dieterich Buxtehude provided the musical foundation on which the Leipzig master built.

Norman Cocker’s “Tuba Tune” displayed a certain Edwardian pomp and gravitas that complemented the First Methodist Choir’s very British Evensong that preceded Price’s recital. The “Tuba” in the title refers not to that large brass instrument usually found in the back corner of a symphony orchestra, but to a very loud trumpet-like stop found on large British pipe organs.

Louis Vierne’s “Les cloches de Hinckley,” one of those toccata-like etudes that Francophiles adore but strike the rest of us as turgid and repetitive, closed the recital.

[themify_box style=”shadow” ]This recital was presented by the First United Methodist Church of San Diego as part of its Third Annual Robert Stadge Memorial Concert. The next program on the church’s music series will be the Spivey Hall Children’s Choir on June 4, 2017, at 7:00 p.m.[/themify_box]