Stephanie Blythe has won a serious following in San Diego. In February of 2014, she impressed with her nonpareil interpretation of Ulrica in Verdi’s A Masked Ball, one of San Diego Opera’s finest productions of recent decades, a production that included tenor superstar Piotr Beczała. The next month Blythe and Beczała soared as soloists in the company’s concert performance of Verdi’s Requiem at the San Diego Civic Center, and in December, 2014, Blythe returned to San Diego Opera to give a nostalgia filled solo performance at the Balboa Theatre devoted to the music of Kate Smith. 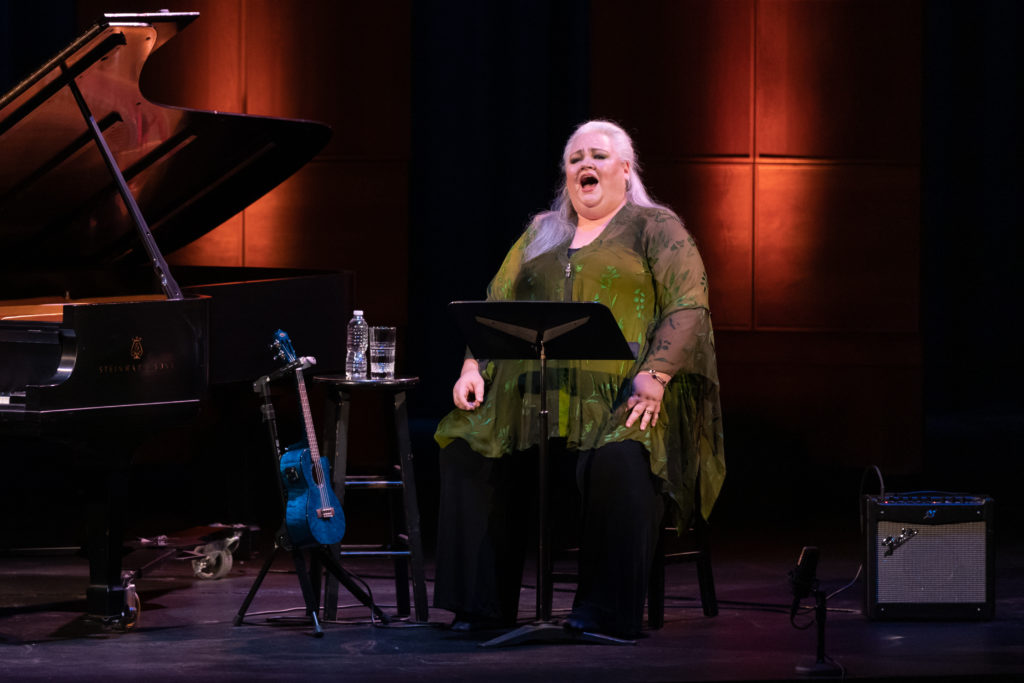 Saturday at the Balboa Theatre, Blythe took on a more promising subject, the noted mid-20th century song composer and lyricist, Johnny Mercer. In addition to Blythe’s persuasive, radiant mezzo-soprano and her charming accounts of Mercer’s formidable collaborations, we were enthralled with Ryan MacEvoy McCullough’s astounding work at the piano.

Although we now call pianists such as McCullough Collaborative Musicians—admittedly accompanist has never been an adequate term—even this current designation proved insufficient in his case. For each song, McCollough composed an astonishingly inventive tone poem that added layers of meaning to both the lyrics and the composer’s themes—without distracting from the either the beauty of the song or the art of the singer. The synergy of Blythe and McCollough gave a perfunctory nod to nostalgia, but quickly raced past that modest virtue to empyrean heights of interpretation and revelation.

The duo opened with a laid-back account of “Accentuate the Positive,” a 1944 collaboration of lyricist Mercer with composer Harold Arlen. But the irony of this choice became apparent as the program unfolded, since the spectacular work of these two musicians hardly needed the saucy admonition of the song’s title.

Blythe’s choice of songs favored those written in the years just before the U.S.A. entered World War II, a defensible decision since that is arguably the high point of what we now call The Great American Songbook: memorable songs such as the dreamy “I Thought About You,” the breezy “Day In, Day Out,” and the cute vernacular bounce of “Jeepers Creepers.” Blythe did not merely sing through these popular ballads: she sculpted every phrase with the finesse and insightful intention she would use on her Verdi arias or a Schubert song cycle, and each song glowed with uncanny presence and emotional depth.

Her account of “Laura,” Mercer’s haunting lyrics to David Raksin’s sophisticated score for the 1944 film of the same name, created the vivid emotional impact of an anguished opera monologue while maintaining the evanescent quality of Mercer’s poetry. No mean feat, I tell you! She created an equally nuanced mood, bordering on the gloriously eerie tone of a seance, for the lesser known “And When October Goes.”

Blythe proved adept a comedy—a cheeky rendition of “The Waiter, the Porter, and the Upstairs Maid” from the 1941 Bing Crosby film The Birth of the Blues—while she and McCollough unleashed frenetic be-bop energy with their brilliantly accented presentation of “My Shining Hour.”

Some my say the ukulele is an acquired taste, but Blythe made a strong case for the instrument as she accompanied herself in “Autumn Leaves” (yes, we noticed the zing of the Picardy third at the close of this minor mode gem!) and “Moon River,” probably Mercer’s most lauded and well-known lyric.

This program was presented by San Diego Opera at the Balboa Theatre in downtown San Diego on Saturday, October 23, 2021.