While too many classical music organizations continue to recycle the same Beethoven and Brahms symphonies, Rachmaninoff piano concertos, and Puccini operas, local audiences can count on the Bach Collegium San Diego to surprise us regularly with rare and amazing repertory. Friday (March 4) in the University of San Diego’s Founders Chapel, the Bach Collegium presented “An Empire of Silver and Gold,” a vivid, revelatory concert of Baroque music from Latin America, one of the last frontiers of current musicological exploration. 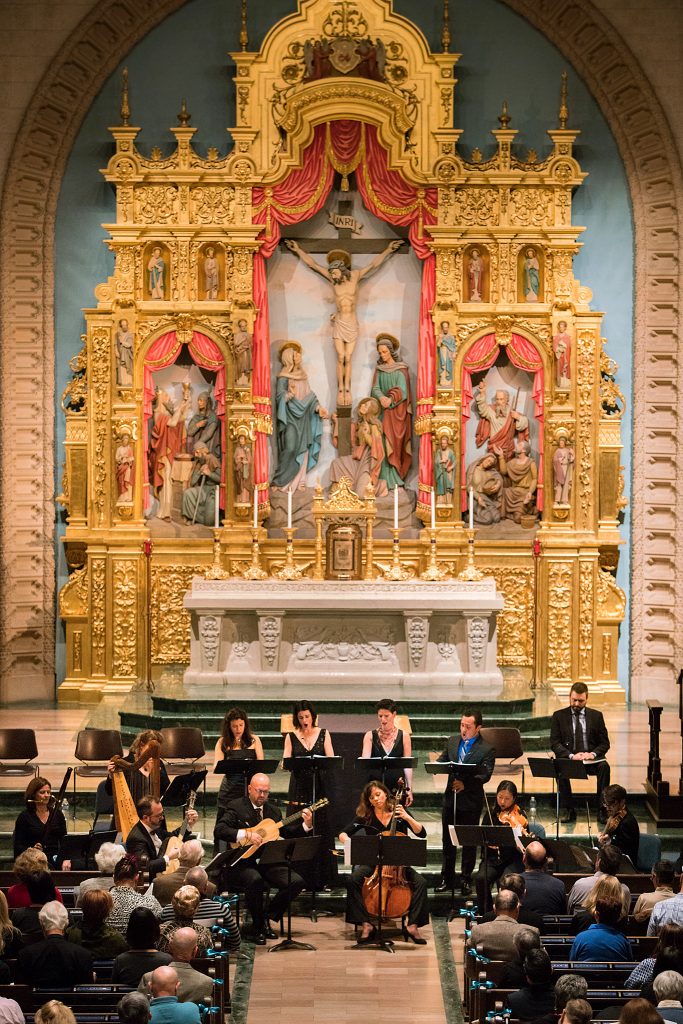 From a purely musical perspective, the musical culture created by Spanish and Portuguese colonization of the western hemisphere represents an intriguing final chapter of the 20th century’s intrepid Baroque revival, but from a sociological perspective, this “cultural interaction was hardly between two equal parties,” as the concert’s programmer Daniel Zuluaga explained in his printed program notes. At various stops on the recent papal visit to South America, Pope Francis addressed this aspect of the Catholic Church’s missionary work during this period.

Given such complexities and compromises, it is clear that Christian practice engaged the popular culture in Juan de Araujo’s festive Bolivian Nativity villancico (the Spanish variant of carol) “¡Ay, andar a tocar, a cantar, abaylar!” Instead of explaining the theology of the birth of Jesus, as most carols do, this infectious, highly rhythmic dance carol exhorts everyone to dance, play and have a great time during this festival, while each verse comments on some local character, including: “an insolent altar boy/trying to be louder than the racket,/gave such a shriek/that he cured a man of his deafness.”

The Nativity villancico, an anonymous “Pasacualiyo” from Peru, employs a Spanish patois used by the African slaves brought to the New World and invites everyone to make a splendid Christmas procession “to outshine that of Holy Week.” In this dramatic scene, tenor Estrada sang the vivid narration, while the other four voices commented knowingly with sarcastic asides. Another villancico, Joseph de San Juan’s “Una noche que los Reyes,” paints a boisterous village scene where the local holy fool Anton stubbornly refuses to sing the a carol for the Wise Men on Epiphany, a role bass Mischa Bouvier carried out splendidly with scripted huffing and complaining interspersed between his polished vocal lines.

In contrast to music based on dance, a type of vocal cantata figured prominently in this South American tradition. While the Spanish composer Joseph de Torres never left Spain, the score of his Ascension cantata “Lágrimas tristes, corred” made its way to the Guatemala City Cathedral and is, in fact, the only extant copy of this music. Florid vocal embellishment accompanied by virtuosic violin figurations as well as a late Italian Baroque harmonic sophistication characterize Torres’ style. Violinists Susan Feldman and Andrew McIntosh fulfilled their crucial role in the cantata with propulsive precision.

The three strings and cornettist Nathaniel Cox offered a sedate transcription of a “Tiento” (Prelude) by the celebrated 17th-century Spanish organist Joan Cabanilles, although with a one of the chapel’s pipe organs only ten feet behind the performers, it seemed odd to be hearing a transcription of Cabanilles instead of the real thing. Cox took the ornamented upper line of the Prelude and gave it a pleasing, distinctive color and shape.

Presenting this concert in the university’s ornate, neo-colonial Founders Chapel—with its overpowering gilded reredos towering behind the musicians—added to the authenticity of the musical experience. May I suggest the University of San Diego, the Bach Collegium and other appropriate choral ensembles hold a summer conference on this rich lode of Baroque music in the New World. “An Empire of Silver and Gold,” so elegantly put together by Nell Snaidas and Daniel Zuluaga, has only scratched the surface of this intriguing topic.

Bach Collegium program: An Empire of Silver and Gold

[themify_box style=”shadow” ]This program was given and reviewed on March 4, 2016, at the University of San Diego’s Founders Chapel. It was repeated on March 5, 2016, at All Saints’ Episcopal Church on March 6, 2016.[/themify_box]