When performing the repertory, the Spektral Quartet plays and sounds like most other accomplished string quartets. But the way they structure their programs is quite unlike any other chamber ensemble I have experienced in decades of reviewing. 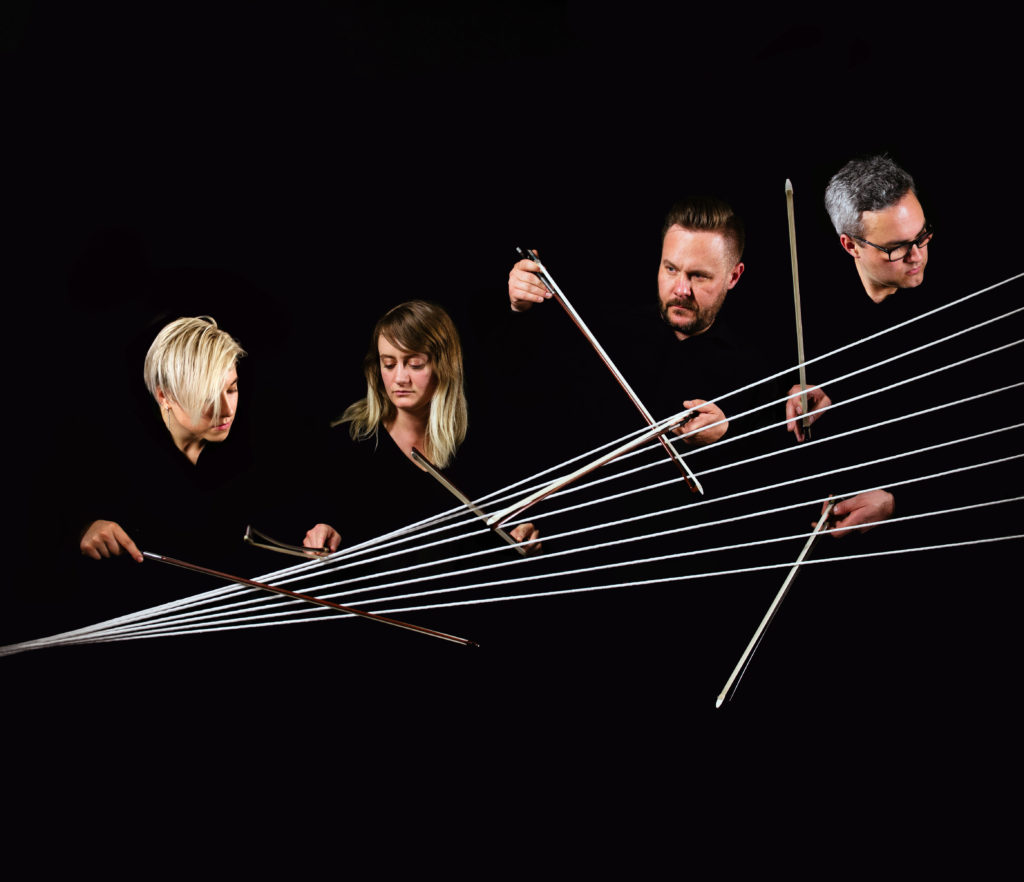 A typical string quartet program consists of three contrasting string quartets, with each quartet comprised of three or four movements. With the customary 15 to 20-minute intermission, this makes a two-hour show, and rarely do quartet members speak to the audience unless they are introducing a newly commissioned work.

Thursday at The Conrad, Spectral played only five single movements, and even with generous but concise introductions to each work given by quartet members, they finished in a succinct 60 minutes.

But, wait—there’s more! Upon entering the hall, everyone was given a set of five contrasting postcards and a pen in order to write a card during each piece Spektral played. Quartet members not only encouraged us to write to our friends about their music while they played; they also coached us with helpful prompts.

Spektral opened with a transcription of Tomás Luis de Victoria’s “O Magnum Mysterium,” one of the best known and celebrated Renaissance motets written in honor of the Nativity. Spektrum’s delicate dynamic shadings and warm but understated sonority communicated well the austere reverence of this motet, although those of us who have sung and directed this sacred choral work had the advantage of knowing the text, which was not included in the program.

Jumping ahead more than three centuries, Spektral gave an electric account of the first movement of Debussy’s G Minor String Quartet, “Animé et très décidé.” The lithe, shapely phrases of violinists Clara Lyon and Maeve Feinberg provided the requisite animation, and there was no lack of confident assertion in the bold themes from violist Doyle Armbrust and cellist Russell Rolen.

In “Hiding Your Present from You,” the late American composer Arthur Russell evoked the steady, easily recognized pulse of a country dance—a hoedown perhaps—with agitated, extended pizzicato passages that suggested a rowdy, though not aggressive congregation of revelers.

An even more recent work for strings, Tomeka Reid’s “Prospective Dwellers,” reveals a cornucopia of eclectic but engaging themes that exploit the wide-ranging sonic possibilities of ensemble strings when bowing is only one technique of many. Reid, a young Chicago composer who described the impetus of her composition in a video screened before the performance, deals with edgy, angular musical ideas that are powerful especially when they are unsettling.

No doubt the slow second movement of Franz Schubert’s A Minor String Quartet, D. 804, was included to provide the Spectral Quartet’s program a contrast of mood, and the musicians aptly displayed its quiet intensity. But on an adventurous program, it did not pull its weight.

The La Jolla Music Society presented the Spektral Quartet on May 26, 2022, at the Conrad Prebys Performing Arts Center.