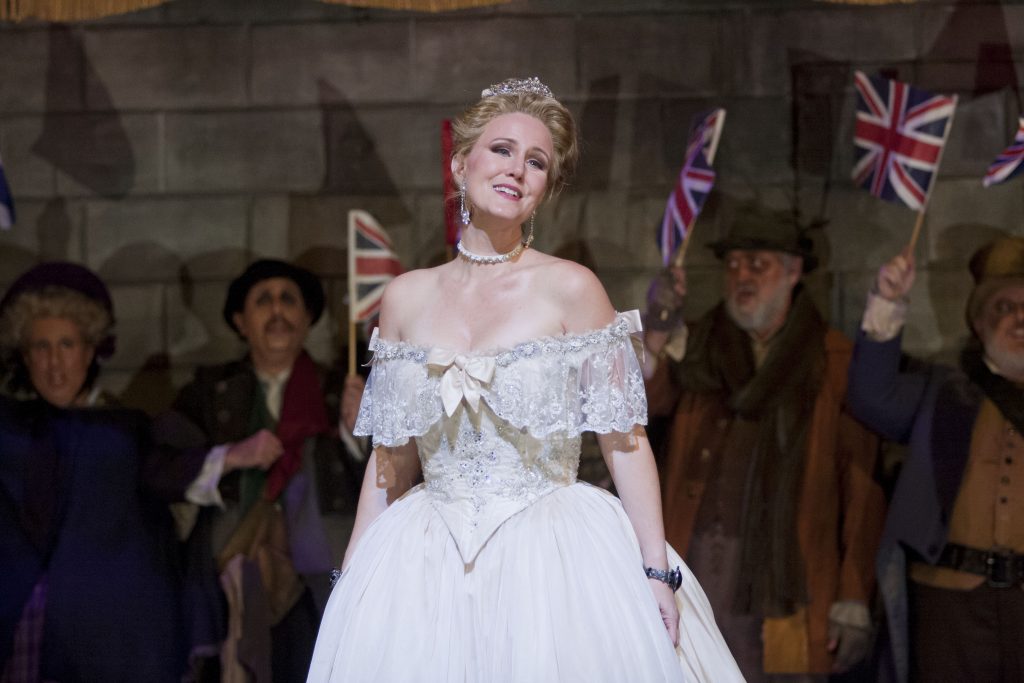 It is hard to imagine a more gratifying opening production for the company’s 2016-17 mainstage opera season.

Unlike historically specific operas such as Modest Moussorgsky’s Boris Godunov or Les Troyens of Hector Berlioz, fairy tale operas are typically set in some anonymous “long ago and far away” location. Hume, however, chose to locate La Cenerentola in London c. 1840, which sharpened the focus of the entire opera. For example, Hume’s head of household Don Magnifico (whom Rossini’s librettist had already exchanged for the tale’s evil stepmother) becomes a prosperous shop-owner who lives above his London dry goods emporium, rather than a baron who inhabits some imaginary  tumbledown castle.

The Prince arrived with a bustling staff and all the appropriate material accoutrements (emblazoned with countless Union Jacks, no less) typical of mid 19th-century British monarchy—a high point for an easily recognized and oft parodied version of royal pomp and circumstance.

In her San Diego Opera debut, mezzo-soprano Lauren McNeese showered the title role with delectable displays of fleet coloratura embellishment, the composer’s calling card, yet crafted melting legato lines for Cinderella’s doleful ballad that accompanies her quotidian chores. McNeese could be modestly obsequious or regally commanding as her role required. Let’s face it—if you cannot produce a splendid Cinderella, would there be any point in doing this opera? McNeese proved a stellar choice for San Diego’s Cinderella, not at all surprising considering the impressive number of bel canto roles she has sung with American companies. 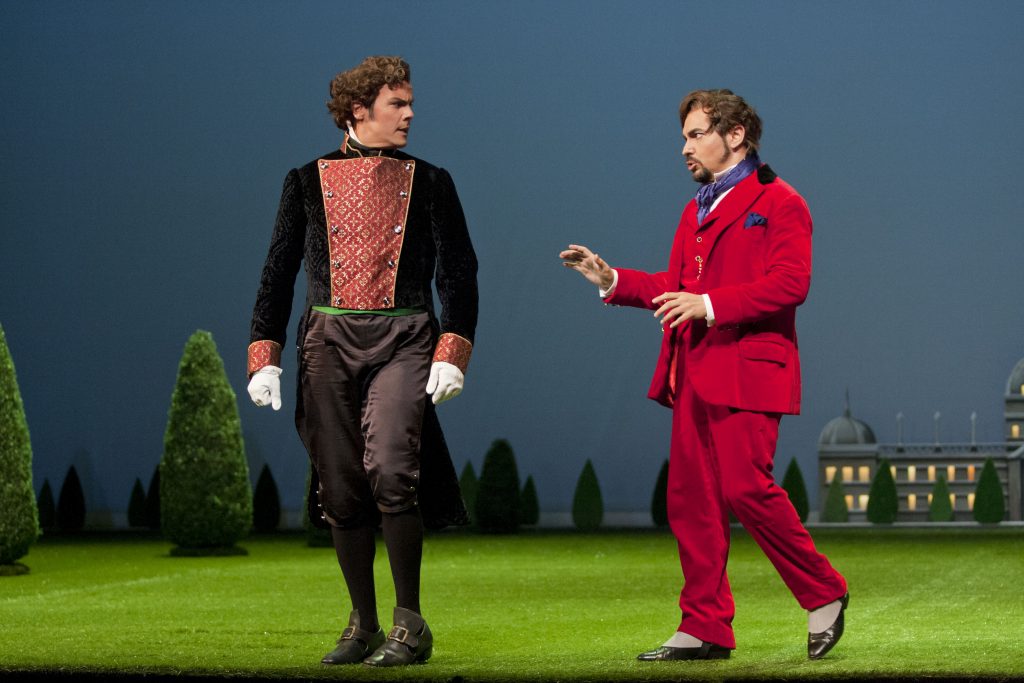 As Cinderella’s Prince, aka Don Ramiro in this opera version of the tale, David Portillo oozed ardent charm, using his colorful, supple tenor to win the affections of Cinderella, even though she did not suspect he was impersonating his valet, Dandini. José Adán Pérez’s robust, burnished baritone served Dandini well, especially as he so evidently relished his impersonation of the Prince with athletic glee. His voice had all the muscle he needed to pump up both his ego and his stature.

Bass-baritone Ashraf Sewailam brought so much vocal power and interpretive depth to his role as Alidoro, he made me momentarily forget about the slender plot of Rossini’s comic opera. A role invented by Rossini’s librettist Jacapo Ferretti, Alidoro acts as tutor to the Prince and resident philosopher, replacing the original story’s magical fairy godmother. He evokes Cinderella’s inherent nobility rather than swatting her on the head with a magic wand.

We have heard Sewailam in several consecutive opera seasons here in San Diego, and with each outing his voice has grown richer and shown greater command. He has a few Verdi roles under his belt at present (he was Count Horn in San Diego’s 2014 Ballo in maschera), but he could become one of the leading Verdi voices of his generation if his vocal progress continues.

Contralto Alissa Anderson and soprano Susannah Biller made the evil stepsisters as clumsily patronizing as Rossini and Ferretti intended, although I thought it was unwise to let their facial sneers color their vocal production. Rossini provided them with ample vocal display, which did not require that touch of nasality to convince the audience of their ill will to their lowly sister. Each singer possesses an ample voice, and I would have enjoyed hearing them perform without the added oral caricature—their body language and the supertitles communicated all we needed to know.

Bass Stefano de Peppo gave us a blustering Don Magnifico well carried by his sturdy basso, although I thought he too could have opted for a smoother vocal delivery with less huffing and puffing.

Chorus Master Bruce Stasnya’s male choristers produced a brighter, more impressive sound than their modest number might have suggested, and they carried out athletic choreography with gusto. Cross-dressing some of the basses and tenors as chambermaids is what we expect from snarky British directors, but since Hume is Australian, we accept this as merely jocular.

Guest conductor Gary Thor Wedow drew crisp, stylish support from the orchestra. The brass sections proved unusually agile in dense sections that revealed how inventive Rossini’s orchestration could be—especially since he finished the entire opera in a mere three weeks. 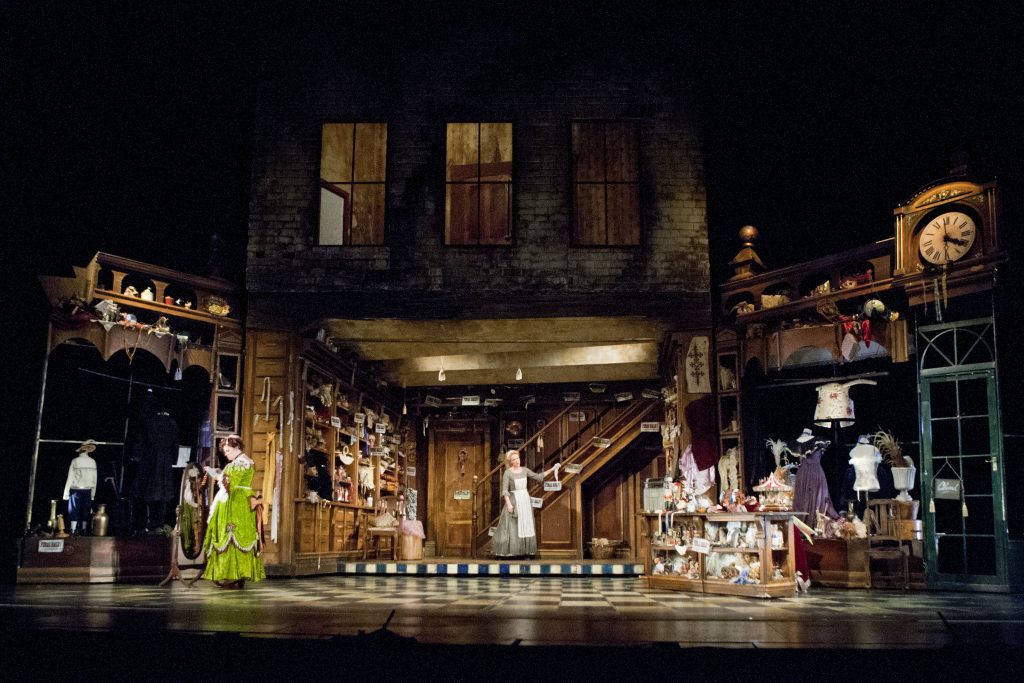 From her cast Hume extracted a nimble, well-timed ensemble effort, and her overall concept clearly won the audience’s lavish enthusiasm from beginning to end. Dan Potra’s costumes tended to storybook vivid: who could resist the stepsister’s neon green and red dresses, not to mention Dandini’s blazing red “look, I’m a prince!” suit? Potra’s design of Don Magnifico’s two-story emporium was as crammed with sumptuous detail as his stylized garden at the Prince’s summer palace was skimpy. Moving the scenes at the Prince’s residence outdoors muted the dramatic effect of Cinderella’s surprise appearance at the Prince’s elaborate ball, which we were forced to imagine rather than see on the stage.

Given the opera’s subject, it was not surprising to see a number of children in the Civic Theatre audience. While it is not exactly a children’s opera, youngsters with patience and stamina will be entertained by the music and by Hume’s unrelenting physical comedy.

This performance by San Diego Opera was given on October 22, 2016, at the San Diego Civic Theatre in downtown San Diego. Remaining performances: October 25, 28, and 30, 2016 in the same venue.