How much do you love opera? If you really love it, probably nothing will keep you from hearing a live performance, despite any inconveniences involved. San Diego Opera has chosen to stage this season’s operas as drive-ins, where the cast is socially distanced, and the audience observes from their cars, mostly on nearby screens, while the music plays over an FM radio channel on the vehicle’s sound system. The fall production of La Bohème in this format seemed to work well, especially in that there were no reported cases of COVID-19 occurring in the performers, staff, or audience members, despite some 4,200 viewers gathering for it. 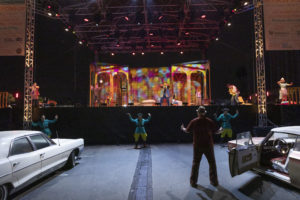 The spring production, Rossini’s The Barber of Seville, which opened on Sunday April 25, with additional performances scheduled on Tuesday, April 27, Friday, April 30, and Saturday, May 1, follows a similar pattern. A stage and an open-air orchestra tent for members of the San Diego Symphony and conductor Bruce Stasyna have been constructed in the area behind Pechanga Sports Arena and cars with audience members (as many allowed as the car has seat belts) are ushered to reserved parking spaces. For the most part, it is not necessarily productive to try to watch the stage – the video projections capture the action and the colorful, 1960s-era, costumes well. The true test comes from Ross Goldman’s sound design, which needs to blend voice and instruments for playing over a car stereo system, as well as provide the means to keep singers and instrumentalists together. Mr. Goldman’s design accomplishes its goal admirably – the best thing about Sunday evening for me was the pleasure of listening.

It helps to have a strong cast, and the principals fill the bill. Tenor Carlos Enrique Santelli especially soared as Count Almaviva, aka, Lindoro, the young lover who hopes to wrest Rosina (Emily Fons) out of the clutches of Dr. Bartolo (Patrick Carfizzi), her guardian who plans to marry her himself, much to Rosina’s dismay. Almaviva is helped by Figaro (David Pershall), a servant-for-hire as a “fixer,” and Figaro proceeds to maneuver so that Almaviva, the handsome suiter, and Rosina, the fair maiden, end up together, though not without more than a share of conniving and disguised identities. A music teacher (Peixin Chen) passes through more than once, not quite aware that his role is being usurped as part of the disguised wooing. By the conclusion (in this production, three parts, no intermission), the anthem to love, “Amor e fede eterna, si vegga in noi regnar!” blended the principals’ voices in triumph. 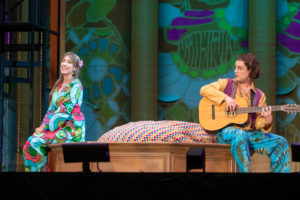 Were that the visual elements as pleasant as the aural ones. While the costumes, which were borrowed from Utah Opera, were colorful, they were also summery and Ms. Fons, for one, looked pretty cold in hers on a breezy evening with temperatures in the 50s. Stage Director Keturah Stickann tried to recreate some of the humor of Laugh-In and The Smothers Brothers – which, arguably, were the commedia dell’arte characters of their day – by having interlopers frolic in the semi-dark front-of-the-stage area during the performance. Not only were the interlopers confusing, but their jokes weren’t particularly funny, unless one sign that said, “Is this a chicken joke?” referred to the San Diego Chicken, who, sadly, did not make an appearance.

Too, attempting to look through car windows at video screens generally meant looking around obstacles in the vehicle itself, which was not the most pleasant viewing experience.

To answer my opening question, I do love opera, and I was thrilled to hear fine voices in a “live” setting. The company has announced a return to indoor venues for next season, and I will be even happier being able to sit in a theatre and enjoy the exchange of energy between cast and audience without the honking of horns and the flashing of headlights.

Performances begin at 7:30pm and last approximately 90 minutes with no intermission. Audience members may sit unmasked in their vehicles but must mask if they leave their vehicle. Food trucks are available or refreshments may be brought into the site. It is advisable not to leave one’s vehicle during the performance. Honking of horns and flashing of headlights to show appreciation for the performances is encouraged. Other cast members included Alexandra Rodrick, Joshua Arky, and Michael Sokol. Ticket prices are $200 per vehicle or $300 per vehicle for VIP locations.