What does a smashing production of Verdi’s opera La Traviata require? A trio of A-list lead singers; a well-trained chorus that can sing up a storm while appearing to be cavorting party-goers, and tight stage direction that keeps the dramatic tension taut from the raucous opening party scene to the heroine’s climactic death scene. Oh yes, the instrumentalists in the pit need to be pretty sharp, also! 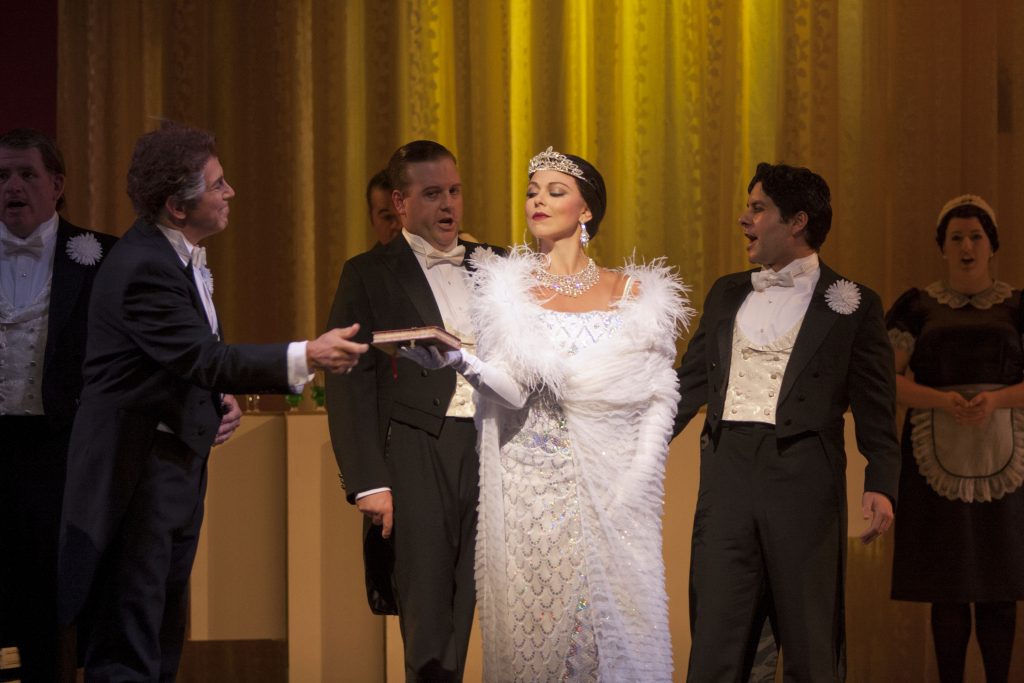 San Diego Opera’s La Traviata production that opened Saturday (April 22) at Civic Theatre displayed a significant number of those traits, and it proved to be an auspicious San Diego debut for Corrine Winters in the title role. Her bright, lithe soprano jumped through all of the role’s coloratura hoops, yet it displayed warmth and body for her more lyrically sustained vocal confessions. Her incisive dramatic instincts energized every encounter, and her final act death scene was as moving and vocally compelling as I have ever experienced in this opera.

In baritone Stephen Powell as the Elder Germont, Winters found an equal vocal and dramatic match: their charged second act encounter bristled with soaring vocal thrusts arising from deep convictions in mortal combat due to their widely disparate social stations. Powell could have chosen a little less bluster and more nuance as the protective, provincial paterfamilias, but his baritonal muscle clearly wooed the Civic Theatre audience. 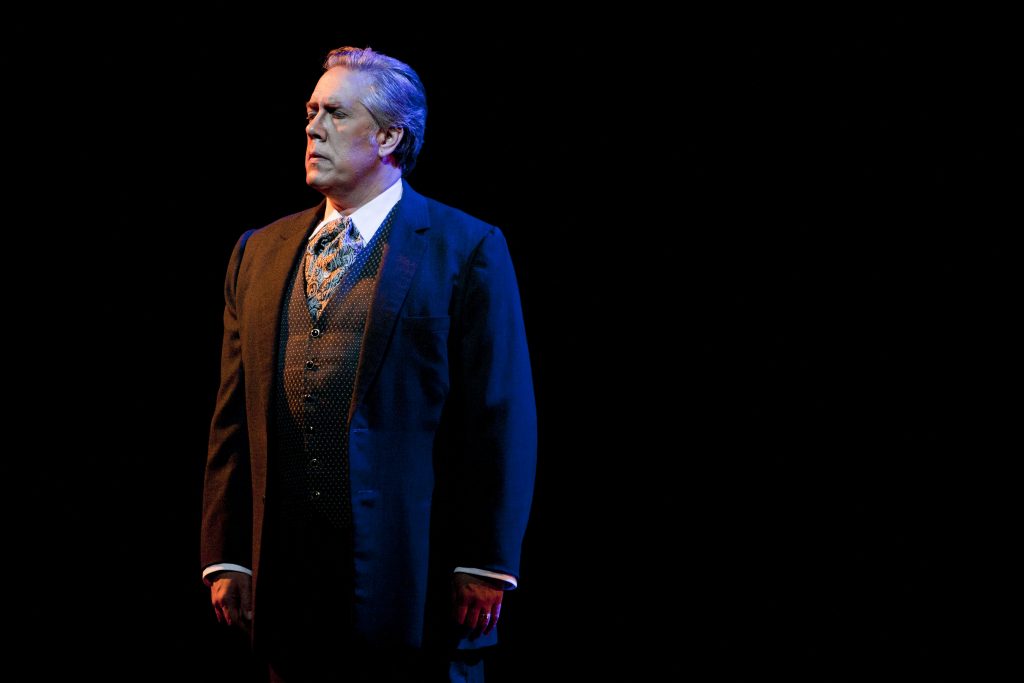 Tenor Jesús Garcia started admirably, looking every bit the dashing young suitor and turning out Verdi’s lyrical phrases with apt style until at the end of the first act his voice broke in a dramatic phrase in his highest register. That unfortunate phrase, “croce e delizia,” indeed tormented the rest of his performance, causing him to pull back vocally, carefully guarding his high notes. This drained the dramatic ardor from his exchanges with Winters, unbalancing Verdi’s sturdy vocal triangle. 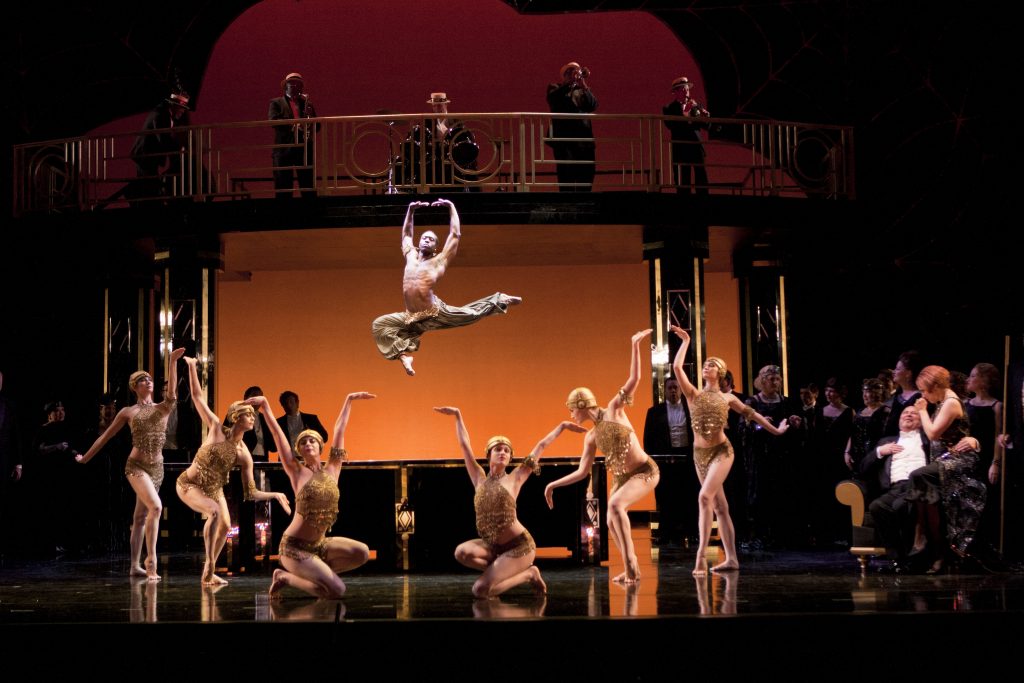 Newcomer David Agler coaxed impressive discipline and apt passion from the orchestra, and he had the conviction to keep Verdi’s pianissimo sections barely audible—making the sometimes blithe Civic Theatre audience quiet down and pay attention to the beauties of the score.

What an excellent La Traviata production does not need is a shallow update, and Marta Domingo’s silly roaring twenties recast of the opera added not a scintilla of depth or insight to Verdi’s work. Her equation of the Parisian demi-monde of the 1850s with 1920s flappers proved feeble enough in her program notes, and on stage was no more convincing. Where to start? The staging was full of contradictions.

Having Violetta cleverly arrive in a vintage sedan meant Verdi’s opening party scene had to begin outside her residence, cleverly represented by a huge lamppost (the opera should begin with the party rocking at full tilt). Then the auto is slowly pulled across the stage while the scene fades into the grand salon–whose only grandeur is a fancy chandelier.

Although the second act is supposed to take place in a luxurious country villa that Violetta has rented for the new couple, Domingo’s second act stage is practically bare, save for a forest of tall trees at the rear of the stage. When the Elder Germont sneeringly asks Violetta whence comes all this luxury the young couple has chosen to inhabit, he is forced to wave his hand at at an empty stage and a grove of trees.

In the third act, a 1920s jazz band—complete with elaborate drum kit—pretends to serenade Flora’s party guests, but, of course, nothing in Verdi’s score sounds a whit like jazz. Pointless miming!

And in the final act, which should take place in Violetta’s cramped bedroom because she and her servant Annina are practically out of money, Violetta is placed center stage upon a large divan rescued from an earlier scene, but now covered with a huge flowered bedspread. Nothing else occupies the stage, although small lights twinkle high in the darkened stage above her. Are they stars in the night sky? Is Violetta living on a rooftop? What are we to make of this?

Domingo’s flashy costumes for the women clearly evoked the chic styles of the 1920s, and the men for the most part appeared in black formal wear: generic but appropriate for the period. I did covet the brown houndstooth suit Alfredo sported in the second act, however. Wig designer Steven W. Bryant no doubt worked overtime creating all those period bobbed hairstyles for the women, and some were smashing.

Let there be vigorous reinventions of operatic time and place if such updating brings us closer to the work’s inherent drama and passion. For example, San Diego’s modest Opera NEO company has updated certain Handel operas from their original ancient Roman setting to a contemporary military and media ethos with success because we understand how to relate to politicians in dark suits and generals strutting about with medal-bedecked uniforms more readily than to skinny singers running around in togas.

But, please, save us from vacuous updating.

[themify_box style=”shadow” ]This San Diego Opera production of Giuseppe Verdi’s La Traviata opened on April 22, 2017, in the San Diego Civic Theatre and will be given three more performances on April 25, 28, and 30, 2017. This production is the final offering of the company’s 2016-17 season.[/themify_box]