Although Angel Joy Blue is making her debut as Liù in San Diego Opera’s production of Puccini’s Turandot that opens on February 24, the young soprano has a long personal history with this famous opera. 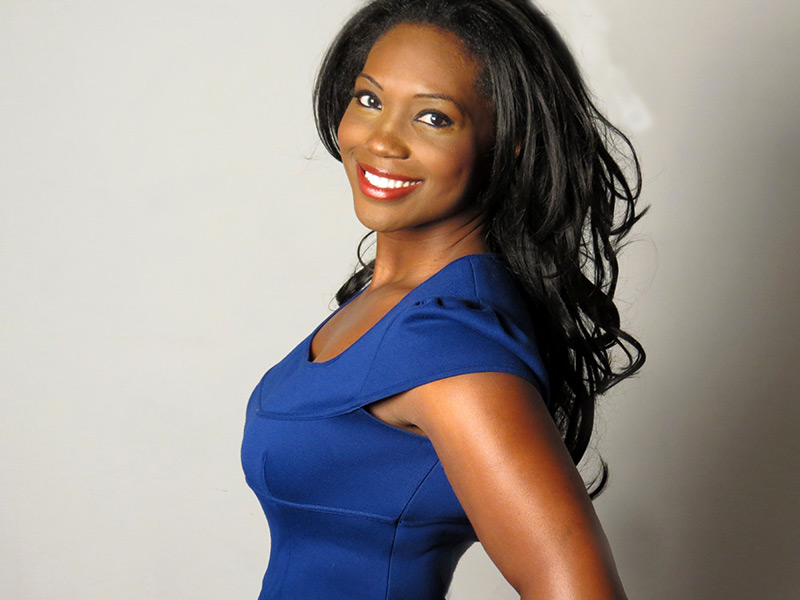 “Turandot was the first opera I ever saw,” Blue explained. “It was in Cleveland, and I was all of four years old. My mother tells me that I sat still for the entire opera—although this was a specially devised 90-minute version of the opera—and I do remember that I was mesmerized by it.”

Blue has the good fortune of being raised by parents who were skilled musicians, a pianist mother and a father who was a minister but also a fine singer.

“My dad was an opera singer, and he loved his recordings by Mario Lanza and Jussi Björling. In fact, the big tenor aria from Turandot, “Nessun dorma,” was his favorite aria.”

For Blue, music lessons started at an early age. “I was seven when I started studying piano and eight when I took my first vocal lessons from my dad. Oh, and at age 10 I also took up bass guitar for good measure.” Into her teens she was well on her way to becoming a virtuoso pianist, until she had a strange experience in a piano competition.

“I was 16 and the competition was held in San Bernardino. I remember sitting down to play, looking at the piano keyboard and realizing that in that instant, nothing looked the same to me.” Blue decided that in spite of her advancing technical ability as a pianist, the instrument did not allow her to express what she felt inside.

“If I was going to continue in music, I needed my voice to express me,” she affirmed. From her father she received unwavering support as she put all of her effort into becoming a great singer. “He never told me to stop practicing—as far as he was concerned, I could sing all day long.” She added that her four siblings did not share a parallel enthusiasm for her vocal marathons.

In 2009, winning top awards in Plácido Domingo’s Operalia, the World Opera Competition, launched her opera career in high gear. That year Domingo’s competition was held in Hungary, and Blue won first place in Operalia’s Zarzuela competition and took second in the Opera competition. These wins brought numerous contracts to sing in European opera houses as well as the opportunity for further vocal study in Valencia, Spain.

After her negative experiences participating in piano competitions, she had initially resisted participating in Operalia, but her father convinced her to enter, helping her select just the right arias to sing and coaching her for the audition with Domingo, the first step in the many levels of the competition, although by design, the great tenor is not involved judging the final rounds.

“My dad prepared me with great love, but passed away exactly two months before my audition. Now, I think he was passing the baton, as if to say to Domingo, ‘Take care of my daughter’.” In the seasons following the 2009 Operalia, Blue has concertized extensively with Domingo. “With my mom’s good company, we have been all over Europe and the Middle East with him performing.”

Blue’s range on the opera stage is impressive: she has sung favorites such as the title role of Puccini’s Tosca with Opera San Jose, Mimì in his La bohème at English National Opera, and Violetta in Verdi’s La traviata at Seattle Opera, as well as less familiar roles such as Clara in Porgy and Bess at La Scala and Myrtle Wilson in John Harbison’s The Great Gatsby in Dresden.

In Puccini’s Turandot, the delicate slave Liù is the second soprano, after the dramatic soprano role of the title character, not unlike Musetta to Mimì in the composer’s earlier La bohème. Blue explained that she understands Liù’s function is to be the spirit guide to Calaf, the young prince who has come to woo the ice-queen empress Turandot.

“The story is based on a mythical plot, and of all the characters, she is the most grounded. She is the voice of reason, a confidant to Calaf who brings as completely different ambience to the piece. Without her presence, nothing would make sense. It is only after she takes her own life that Turandot sees what true love is.”

San Diego Opera’s 2018 production of Turandot opens in the San Diego Civic Theatre on Saturday, February 24 and runs through Sunday, March 4. In addition to Angel Joy Blue as Liù, the cast features tenor Carl Tanner as Calaf and soprano Lise Lindstrom in the title role. The American Keturah Stickann serves a stage director, and the Italian maestro Valerio Galli conducts. The production’s set is from Lyric Opera of Chicago, and the costumes are from Santa Fe Opera.