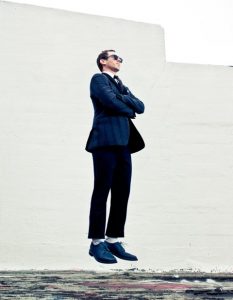 With the demise earlier this month of Anthology, San Diego’s premier jazz venue, local jazz fans have every right to feel blue. Tuned in aficionados, however, experienced a momentary reprieve Sunday (Jan. 20) at Space4Art when Brooklyn-based jazz pianist Erik Deutsch and his ensemble gave an electric program for Bonnie Wright’s Fresh Sound series.

Centered around pieces from Deutsch’s most recent disc “Demonio Teclado,” this high-energy concert offered driving, virtuoso solos layered into taut structures that never lost their edge or momentum. From the group’s opening “Funky Digits,” it was clear that Deutsch’s keyboard panache found a stylistic soulmate in Jon Gray’s athletic trumpet. Their tart exchanges and deft contrapuntal overlays bristled with the excitement of sharp players who know how to simultaneously challenge and complement each other.

Even in a piece that started out with a mellow, ballad-like pace, “Creeper” (also from “Demonio Teclado”), its texture imperceptibly thickened, suggesting an apprehensive edge atypical to the genre. “Creeper” allowed bassist Jeff Hill a solo flight that cleverly played with the meter rather than indulging in flashy figuration.

What sets these players apart and perhaps accounts for their inclusion on Wright’s intentionally avant garde Fresh Sound series is their poised inclusion of extended instrumental techniques. In the onslaught of Deutsch’s signature cascading right hand ostinatos, for example, he will call up a patch (a prepared electronic segment) for blazing sonic contrast or add a touch of treble distortion as a kind of high tech ornament. His synthesizer produced a cornucopia of such unexpected sounds that he adroitly applied as easily as an organist pulls out additional stops.

Another Deutsch piece, “Future Burger” (named after an exotic popular Brazilian candy) bristled with spikey sequences that suggested a closet minimalist hiding under his high tech dexterity. “Lover’s Eyes” opened with familiar romantic insinuations, including some suggestive trumpet swoons from Gray, but developed into the more abstract complexities that appeal to Deutsch’s fertile imagination.

In addition to the album selections, the group offered two covers, the Rolling Stones’ “Wild Horses,” the evening’s only [php snippet=1] laid-back reverie, and a kinetic Harry Nilsson song that gave trumpeter Gray a chance to demonstrate his vocal prowess and drummer Tony Mason his percussive flare.

The group’s encore brought from the audience Art Lande, whom Deutsch introduced as his teacher and long-time mentor. Lande pulled out his trusty melodica and joined the young players in a stomping blues ballad.