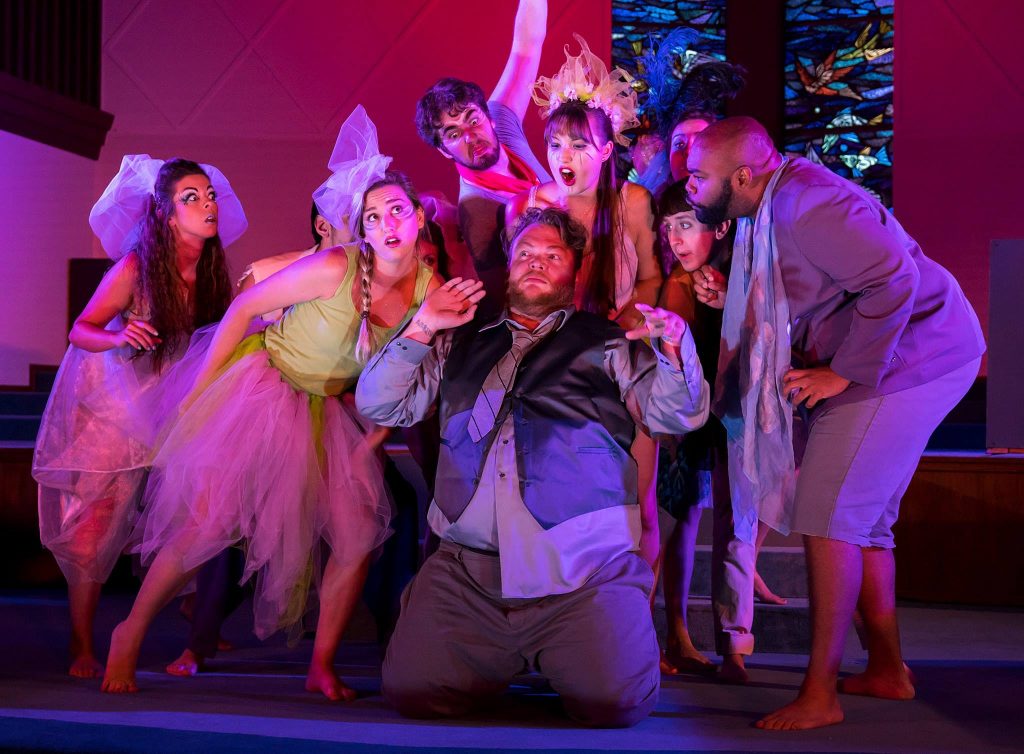 Oh, and there was lots and lots of fine singing and spirited chorus work, too! In fact, so much was going on in the sanctuary of Palisades Presbyterian Church, host of Opera NEO’s summer performances, that it is difficult to know where to begin.

First of all, just what is a masque? Music dictionaries like to define this 17th-century theatrical entertainment as a semi-opera, but, really, how helpful is that? Think of a masque as an early incarnation of Crique du Soleil where the acrobats sing some songs. In 1692 Purcell staged The Fairy Queen, loosely based on Shakespeare’s comedy A Midsummer Night’s Dream, as a celebration of the English monarchs William and Mary’s fifteenth wedding anniversary.

A series of vignettes without dialogue unfolds the plot, which the composer assumed everyone already knew, and which was subsequently larded with mythological personages and representations of the four seasons to improve upon the Bard’s modest ability as playwright. Presaging Richard Wagner’s approach, Purcell made his orchestra the primary shaper of the drama, and Kraemer directed his 18 players with a crisp but sensitive discipline that relentlessly propelled the dramatic pace. 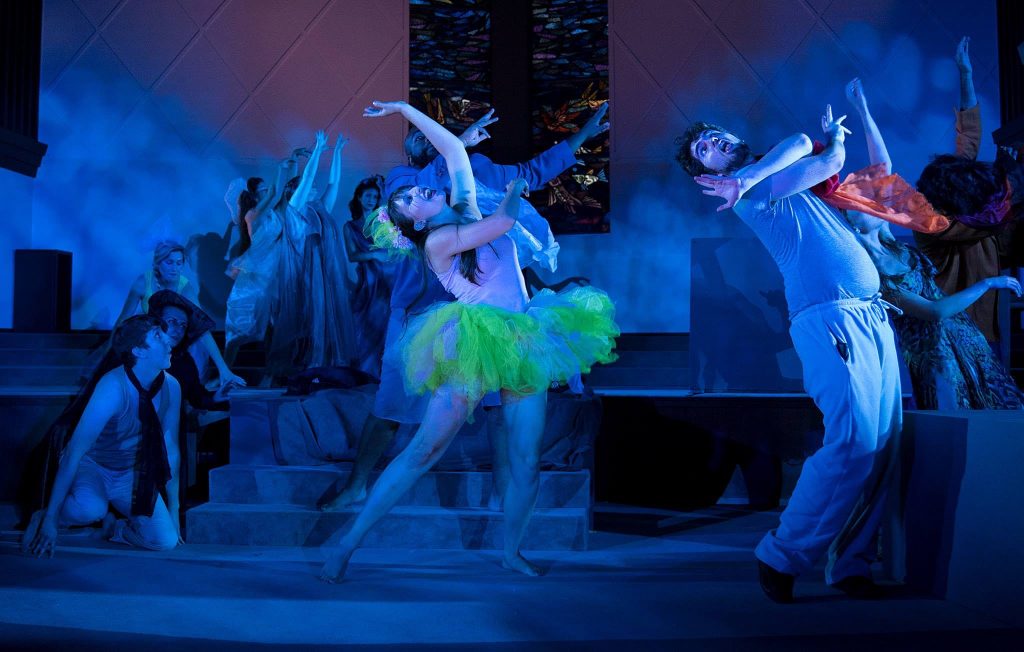 In The Fairy Queen, the central role of Puck is given to a mute dancer, inhabited in this production with nimble acrobatic grace by James LaRose. With his able dance colleagues Tanya Lewis and Christian Drugan, he energized every scene with a fanciful urgency that sharpened the fantastical ethos of this dream adventure.

Given the large cast of singers, allow me to mention the most accomplished, especially since this cast is made up of students at various levels of training and preparation. Dale DeWood’s ample, sensuously edged bass-baritone portrayed both the humor and ardor of Bottom (aka the Drunken Poet) with smashing success. Charlotte Jackson’s clear, generously produced soprano made her love-besotted Helena a delight, and mezzo-soprano Christina Pezzarossi matched her vocal prowess as Hermia, the other fair, young damsel.

Lyric tenor Blair Remmers smartly shaped Phoebus” ballad “When a cruel winter” with his appropriately rich, golden tone; casting the sun god as a rock star clad in gold lamé and sporting oversized dark glasses could not have been more clever. As Winter, the confident baritone Christopher Edwards brought depth to his aria “Now Winter comes slowly,” and Korean soprano Na-Re Yang as Night infused her nocturne “See even Night herself” with tender inflection. Countertenor Philip Gómez filled several roles neatly, but I was most impressed with his account of the lyrical ballad “See the many-colored fields” in his role as Autumn.

At the masque’s conclusion, baritone Joseph Flaxman as Hymen sang a hearty benediction to all lovers, “They shall be as happy as they are fair.” Vesting the god of marriage in an oversized bathrobe and having him enter the stage in a groggy stupor—as if he had just been awakened from the sleep of connubial bliss—proved another directorial win for Kozma.

Chorus Master Yewon Lee molded 20 singers from the cast and opera workshop into a bold and finely tuned choral ensemble of resident fairies and creatures of the night that made Purcell’s ingratiating choral writing even more rewarding, and they incorporated Valerdi-Rogers’s choreography handily. I don’t doubt for a moment that local fabric shops had a run on tulle in order to make Green’s profusion of diaphanous costumes for these creatures, although her choice of brilliant hues will make them easy to recycle for next year’s Pride parade. I’ve already mentioned some of Green’s more astute costuming choices, to which I would add the identical costumes of the two mismatched young couples.

Among the instrumentalists, allow me to praise Baroque trumpeters Melissa Rodgers and Shelby Lewis for fanfares that were always spot-on in pitch and festively ceremonial, especially when undergirded by timpanist David Whitman. Kraemer provided stylish harpsichord continuo accompaniment in lightly orchestrated solo songs, and Korey Barrett gave sturdy, well-appointed keyboard support when Kraemer was conducting the full orchestra. I would give the strings high marks for ensemble discipline and conveying a clear sense of late 17th-century style, although their pitch proved wayward from time to time.

Stage Directors Margaret Jumonville and Azalea Laredo wisely used all of the church’s helpfully tiered chancel space (with all of the liturgical furniture removed) and the church’s center aisle—superb for grand entrances—to stage the masque. If this approach was not quite theater in the round, I thought it more audience friendly than most proscenium stage productions. The actors took their pacing cues from the dancers, proving consistently light on their feet—except, of course, when knocked out of one of Puck’s many magic potions.

Michael von Hoffman’s lighting kept the nocturnal mood most of the time, and his use of color aptly coded the dream-like portions of the masque. And three cheers for the supertitles projected off to one side of the stage.

As Opera NEO’s production of The Fairy Queen began to unfold in the Presbyterian sanctuary, I felt some qualms about experiencing this very secular entertainment in a sacred space. But since the subject of The Fairy Queen is a celebration of the institution of marriage, churches perform marriages all of the time. Most folks attend a church wedding to wish their friends the same sentiment that Hymen proclaims in his song in the last act: “They shall be as happy as they are fair.” That secular benediction felt exactly right in the sanctuary of Palisades Presbyterian Church.