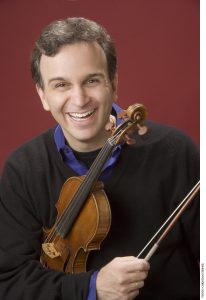 Is there a living violinist other than Gil Shaham I would rather hear perform a solo recital? The unhesitating answer is no, even considering the bevy of stellar contemporary violinists that quickly come to mind.

Shaham and his superb Japanese accompanist Akira Eguchi gave a brilliant—make that transcendent—program at Copley Symphony Hall Thursday (Feb. 7), a balance of classic and new repertory whose masterful execution was exceeded only by their evident conviction of the significance of their offerings.

Opening with J. S. Bach’s Partita No. 3 in E Major for Solo Violin, BWV 1006, and closing with Beethoven’s A Major Sonata, Op. 47 (“Kreutzer”), between these mighty bookends the duo invited their audience to savor newer potential entries to the canon. Both Avner Dorman’s “Nigunim” (his Violin Sonata No. 3) and William Bolcom’s Suite No, 2 for Solo Violin come from 2011 and were written for Shaham.

It was hard to miss the visceral excitment and structural elegance of the 37-year-old Israeli composer’s tribute to the Hebrew Nigun, that wordless cantilena that can embody the gamut of human emotions both sacred and secular. As Dorman’s “Nigunim” (the title is the plural of Nigun) unfolded with its contrasts of quiet, mystical tremors and rhapsodic cadenzas, I immediately thought of Ernest Bloch’s “Baal Shem” Suite for violin and piano from the turn of the last century.

While Bloch was indebted to the effusive harmonic palette of late Romanticism, Dorman is more a child of Minimalism, although I am thinking of the style of John Adams’ recent opera Dr. Atomic rather than his early instrumental “Shaker Loops.” In his program notes, Dorman wrote that he was influenced by the “modes and melodic gestures” of the traditional music of the Jewish diaspora, although like Bartók, he absorbed the style in lieu of quoting specific tunes.

I was favorably impressed by the hushed, nocturnal tableau of the mysterious second movement, where slender themes flickered and disappeared, and I was amused by the roaring finale, a tribute to frenzied Macedonian dancing, although my first inpression was a wry imitation of one of those film scores by Aram Khachaturian in which a horde of warriors on horseback careen through the passes of the Caucasas Mountains.

“Nigunim” is a virtuoso duo, and the performers intertwined their spectacular feats with the effortless grace of Olympic 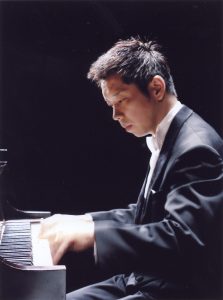 I wish I could be as excited about Bolcom’s new Suite for Shaham, which the program stated was the world premiere, but in comparison to Dorman’s dramatic thrust, it sounded overly demure and wanly episodic. Nine short segments—some were too short to be called movements—in contrasting styles lacked a common purpose. An honored American composer with a large catalogue, Bolcom is a consummate sylist, a point beautifully made by Shaham’s encore, Bolcom’s “Graceful Ghost Rag.” In this charming piece, Bolcom took the genre of the piano rag and gave it a nostalgic twist with his own sophisticated harmonies and rhythmic tweaks.

But his Suite for Solo Violin No. 2 struck me as much tweaking and little substance.

Shaham and Eguchi left nothing to be desired in their encyclopedic account of Beethoven’s “Kreutzer” Sonata. They insightfully terraced the bipolar contrasts of the sonata’s first movement with just enough brio, and they gave the second movement set of variations a relaxed, rococo perusal. Their decidedly Apollonian Presto brought more clarity and structural insight to a movement, a fiery tarantella, more typically played for its abandon.

Like almost any of Yo-Yo Ma’s performances of a Bach unaccompanied Cello Suite, [php snippet=1] Shaham’s unaccompanied Bach Suite was nothing less than a religious experience. He employed his quiet repeats and cradling contrasts to bring the audience into a more serene and contemplative mode of listening.

It is true that his gorgeous, silvery timbre remains unerringly consistent regardless of the range or complexity of figuration. But rather than displaying his own musical virtues, Shaham the performer disappeared and for a few moments suspended in time, like Moses in the cleft of the rock, we saw the Divine pass by.