From ghost light to opening night, Into the Breeches is an irreverent, irresistible comedy that brings the challenge of staging a play in wartime 1942 (without the troupe) into the spotlight. Running at North Coast Repertory Theatre through November 13, this San Diego premiere of the George Brant play is sure to entertain.

As the story unfolds, the Oberon Playhouse in Rhode Island boasts 26 years of Shakespeare excellence, but has come across a near-insurmountable challenge: namely, that all of its male performers have been sent to the other side of the world to fight in the war. As the idiom goes, the show must go on… this time in the hands of neophyte director Maggie (Melanie Lora), stage manager Stuart (Geno Carr), and costumer Ida (Taylor Henderson). And go on it does. After all, who is going to stop the 5 ladies of the town from splitting 33 roles between them? 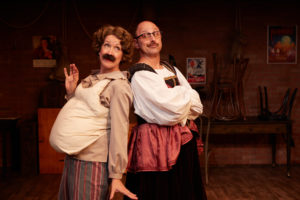 Shana Wride and Geno Carr in Into the Breeches. Photo credit: Aaron Rumley.

It turns out that board president Ellsworth (James Newcomb) tries valiantly to do just that, but is putty in his wife’s (socialite Winifred) hands. Before he knows it, the production has been cast featuring prima donna Celeste (Katie MacNichol), sincere Grace (Rosemarie Chandler), and patriotic June (Mikaela Macias), with Maggie and Winifred (Shana Wride) “rounding out the cast.” With modifications to the bard’s work and a social overhaul, questions start to arise: Is this approach sacrilegious? Precedent-setting? It turns out that the answer may depend on who you ask and what they have to gain.

The technical elements of this production, under the oversight of director Diana Van Fossen, are playful. While the brunt of the action takes place inside of the brick-walled backstage of the Oberon, flats at stage right and left alternately transport the audience to off-site locations including a golf course, a fire escape, and other locales (Marty Burnett). The actors wear a variety of gender-bending costumes (Renetta Lloyd & Roz Lehman) over the course of the production, all of which are period-appropriate and oft-times amusingly constructed to fit the storyline; these are accompanied by some very comical props (Cindy Rumley) and well-apportioned wigs (Peter Herman). 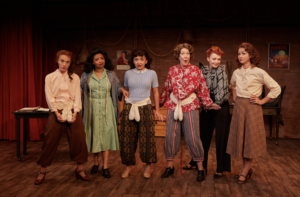 Cast of Into the Breeches. Photo credit: Aaron Rumley.

And, performance-wise, this production is everything I could have hoped it would be: the cast has delightful comedic timing and each actor embodies their character in full. Shakespeare’s lines (the production at hand is The Henriad), applied to move the storyline forward as the show grows increasingly closer to opening, range in delivery from awkward to excessive to slapstick to earnest. Quick changes, sword fighting, and inopportune truth-tellings ensue.  I giggled as the characters navigated tricks to help them stage their newfound manliness, soaked in their larger-than-life sitcom-esque facial expressions, and sighed at an unexpected tender moment on a fire escape. I carried a deep feeling of unease about the wellbeing of the characters’ loved ones overseas. I was invested.

Beyond that, while the team of Into the Breeches is “aces,” as June says, at building a sense of depth and connection to the storyline and the show is delicious in its delivery, it is also unapologetic about tackling (at least to a small degree) some social issues of the era, all while simultaneously counseling us to find joy in being who we are, and making a pitch for us to educate and broaden the minds of those adjacent to us. “Not if they don’t want it,” cautions Ellsworth but, to borrow from Hamlet, the financier “doth protest too much.”

The bottom line? As a theatre lover who has watched local performance venues barely pull through the darkened halls of the pandemic, seen marginalized communities fight to be heard, and witnessed people struggling to reconnect with one another, it seems that this period comedy – somehow – is just in time.