Octavio Solis has written Mother Road, now playing at the San Diego Repertory Theatre, as a reversal on John Steinbeck’s classic novel, The Grapes of Wrath. Where Steinbeck’s novel portrays the Joad family leaving Oklahoma for the hope of a better life, Mother Road takes the trip in reverse. It’s a big country, and the vista from Route 66 is a broad one. Sam Woodhouse’s production takes advantage of the Rep’s stage to turn a family drama into an epic. 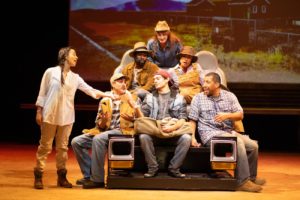 The cast
Photos by Rich Soublet

The play opens with William (aka Will) Joad (Mark Murphey) and his attorney, Roger (Jason Heil) meeting young Martín Jodes (Richard Jessie Johnson). Will has done research into the Joad family, and he is convinced that Martín is the heir to the Joad farm in Oklahoma. Will wants to travel to the farm with Martín to complete the transfer of ownership of the property. Will has a fair amount of urgency in making this trip, as he has uncurable cancer and is not expected to be alive much longer.

Martín, for his part, is not only skeptical about the entire enterprise, but he’s also carrying on a romance with Amelia (Celeste Lanuza), and he’s concerned about his legal status in the U. S.

Along the way, the pair meet up with the kinds of people you might meet along Route 66 (played by ensemble members Cedric Lamar, Sandy Campbell, Javier Guerrero, and Rubin Rubio, in addition to Mr. Heil). One of the people they meet, Mo (Yadi Correa), ends up joining them in Martín’s car and becomes helpful when the inevitable trouble occurs. 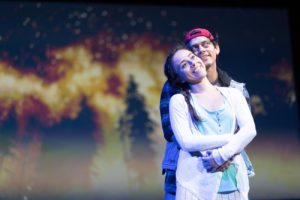 Mr. Woodhouse has molded the cast so that each member is essential to telling the story. He draws out distinct characters and generates a good deal of audience identification with people who may not be at all like them. Mr. Johnson gets the last bow, but what’s eye-opening is that a story of such sweep was told by so few people.

It’s the sweep that’s the star, though, and Charles Murdock Lucas is the star-maker, as the scenic and projections designer. The scenic design features a number of pieces that move, including the car that what becomes an intrepid quartet use to make the trip. Mr. Lucas’ projections light up a screen the width of the entire stage, and they even depict a realistic rainstorm that runs across the intermission break. He’s ably assisted by lighting designer Chris Rynne, sound designer Paul James Pendergrast, who also composed original music, and costume designer Jennifer Brawn Gittings.

Ensemble playing is a specialty for Mr. Murphey, who performed in the world premiere of Mother Road at the Oregon Shakespeare Festival. He also performed the role of William Joad in the Arena Stage production. Mr. Murphey anchors the ensemble without stepping into the spotlight, which is a quality to be admired. Mr. Johnson plays his boyish looks to advantage and even looks in character with his shirt off. Mr. Lamar, also a Mother Road veteran from the Oregon Shakespeare Festival, doubled as what the program calls “Movement & Music Coordinator & Fight Director.”

Clearly, the Rep wanted to make an impression with its first live production since March 2020. It succeeded and then some.

Performs Wednesdays and Sundays at 7pm, Thursdays, Fridays, and Saturdays at 8pm, with a matinee Sundays at 2pm. The Lyceum Theatre is located below street level at Horton Plaza. Parking is available in the 225 Broadway lot, across from the entrance to the theatre. Ask when purchasing tickets about parking rates for the theatre. Horton Plaza is undergoing a major renovation, so the stairs to the lower level may not be apparent if you have not visited previously. There are a number of restaurants within walking distance of the theatre.