San Diego theatre has been resuming to some degree in fits and starts. Not everything goes smoothly, and there are sometimes last-minute changes to productions, especially among the smaller theatre companies. So, it’s not surprising that Scripps Ranch Theatre had some difficulty mounting John Kolvenbach’s play, Love Song, encountering bumps along the way to public performances. 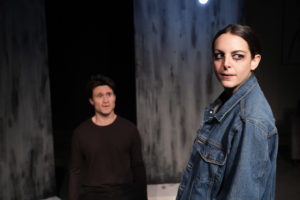 Director Claire Simba admitted as much, in the program’s “Director’s Notes” column. Apparently, she took over from another director, inheriting “most of his cast,” which is a tough place from which to start. That Ms. Simba mounted a credible production under these circumstances is a worthy accomplishment.

It doesn’t help that Mr. Kolvenbach’s play is a difficult one. It is set “At a place and in a time with people,” which might be clever but is also a clue to what little the author seems to be doing. The program cover (accessible from the link below) asks “What is reality?” and “What is love?” both deep and to some degree unanswerable questions. The play does not try to answer these questions, but it does try to present contrasting perspectives on reality and love, from the point of view of a troubled man named Beane (Paul Eddy), as well as from the point of view of Beane’s sister, Joan (Leigh Akin).

Starting with Joan, she lives in a conventional though somewhat stagnant relationship with her husband, Harry (John DeCarlo). Joan is worried about her brother, Beane, as he lives alone, and she sees that he doesn’t always care for himself well. She worries about Beane’s state of mental health, but Harry and she don’t want to intervene unless doing so becomes necessary. There’s a possibility that she finds Beane’s chaotic life to be a refreshing contrast to her own.

Beane, for his part, believes that he has found a woman who is a potential partner. Her name is Molly (Claire Kaplan), and he first encountered her when she was robbing him. Molly seems dangerous, and that appeals to Beane, both in the moment and in his fantasies. 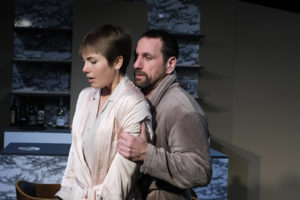 Suffice it to say that Joan becomes concerned about Beane’s relationship with Molly. To disclose more would spoil how the 90-minute, no intermission, play develops and (maybe) resolves.

Mr. Kolvenbach’s play can be confusing, and even after the characters provide some significant clues to what’s going on, one can’t be certain that those clues are accurate. Love Song is deliberately not a well-made play, which can be frustrating.

Too, Alliant International University’s Legler Benbough Theatre does not provide the most ideal venue for the audience, as the stage is wide and the audience is not well-raked (I spent the play looking around a group of tall women seated in front of me). Even so, the work of the creative team (set and props design by Alyssa Kane, costume design by Bernice Brosious, lighting design by Jared Jacobs, and sound design by Robert May) was uniformly credit worthy.

I admire the Scripps Ranch company for taking on such a challenging play and making as much of it as they did.

Runs through March 20th. Fridays and Saturdays at 8pm, Sundays at 2pm. Parking is mostly in a lot from which it’s a short uphill walk to the theater building. There is limited handicapped parking close to the building. Standard COVID protocols apply to admission to the performance. There is no charge for parking, and signs on the Alliant campus clearly lead to the patron lot.