With the amount of early Mozart music maestro Michael Francis is performing at this year’s Mainly Mozart Festival, I suggest that audience members should be able to petition for upper division Music History credits at one of our local universities. Would it help if we also turned in a thoughtful essay after the final festival concert on June 18? 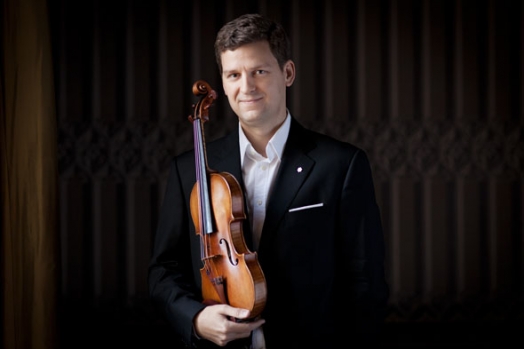 Wednesday’s (June 15) program at the Balboa Theatre balanced offerings of early Mozart with early Schubert, a logical pairing that showed each composer’s youthful exuberance and hints of deeper musical expression that we associate with the mature classics from Mozart and Schubert.

James Ehnes, a familiar Mainly Mozart guest artist, gave a cool and elegantly finished account of Mozart’s Violin Concerto No. 1 in B-flat Major, K. 207. Completed at age 17, the spirited Concerto’s vigorous outer movements come as no surprise, but the emotional depth of the middle movement—a gorgeous operatic aria for the solo violin—is remarkable. Ehnes mined its poignancy with consummate skill, and Francis coaxed a plush, shimmering sonority from the orchestra to complement his artistry.

Mozart’s concluding Presto comes on like gangbusters, exploding with rocket-like themes that either mock or pay homage to that earlier generation of European symphonists known as the Mannheim School. Not only did the orchestra’s ensemble discipline make these figures more exciting; it allowed the internal counter themes—something the young composer was just discovering to flaunt—to sparkle with even greater clarity.

In addition to vivid cascades of melodic invention tossed off with frightening accuracy and calm assurance by Ehnes, the playful thematic interaction between the first violins and the soloist provided additional satisfaction. When a festival orchestra’s violin section is mostly concertmasters from other orchestras, their ensemble brilliance is something to behold, and it appeared that Ehnes was enjoying every moment of their antiphonal exchanges.

Although most conductors pay scant attention to Schubert’s first four symphonies, Francis made a compelling case for Schubert’s Symphony No. 1 in D Major. Based on Joseph Haydn’s sturdy classical four-movement design, Schubert’s First Symphony sails through those well-charted waters with buoyant optimism. From the orchestra, Francis elicited clean, articulate phrasing, even in the busiest passage work. He was not afraid to bring out bold dramatic surges now and then, but he never sacrificed the orchestra’s cohesive ensemble. In this movement, and actually throughout the symphony, beautifully turned out solos from Principal Oboe Erik Behr, Principal Bassoon Whitney Crockett, and Principal Clarinet Boris Allakhverdyan made Schubert’s lyrical themes even more compelling.

Schubert’s Andante wandered into the minor mode, where the composer’s innate melancholy plunged the transformed opening theme into that soul-searching territory the composer eventually made his own in innumerable Lieder. Even at age 16, his prescient awareness of life’s darker side lurked beneath the sunniest landscapes.

If Schubert’s Menuetto, in which he overexposes a single, rather banal tune in triple time, comes off slightly juvenile, he redeems himself in the tempestuous finale, an Allegro vivace that Francis roared through with unabashed fervor that still retained the composer’s classical proportions.

Ehnes brought his formidable skill to Schubert’s Rondo in A Major, D. 438, but this cleverly assembled showpiece for violin and strings never took off the ground. Perhaps if Schubert had lived longer, he would have found the insight and inspiration to write a great violin concerto to rival those of Beethoven and Mendelssohn. Although Schubert at age 19 was able to dream up a jaunty rondo theme for this work, he did not find ways for the soloist to develop virtuoso contrasting excursions that would make the return of the rondo rewarding.

Two short Mozart symphonies opened this concert: the Symphony No. 7, K. 45, based on his Overture to La finta semplice, and a later Symphony in D Major, Il sogno di Scipione, K 141a. Neither piece lasts even 10 minutes, and Symphony No. 7, written at age 12, struck me as simplistic in both thematic content and orchestration. In four short years, Mozart had learned a few things about orchestration, but Symphony in D Major is really more like an opera overture than a true symphony. Nevertheless, Francis and the Mainly Mozart orchestra treated it with the same zeal they would have offered for his last and arguably greatest symphony, the C Major “Jupiter, ” K. 551. I doubt that Mozart ever heard these pieces from his teen-age years played with such panache and conviction.