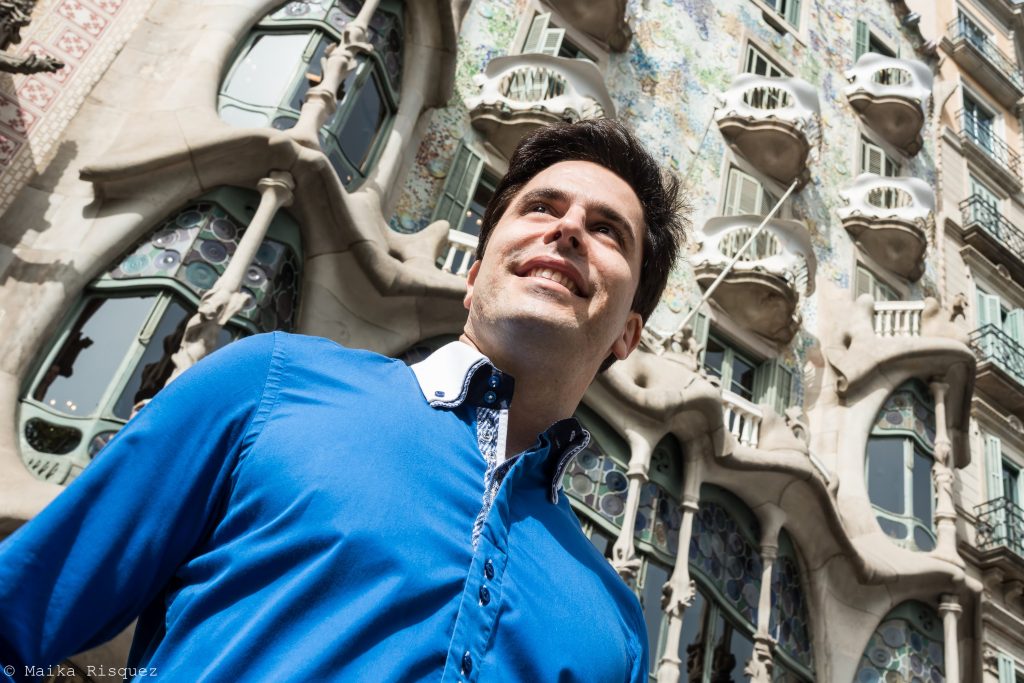 But then he and his concert pianist wife Teresa Sierra listened to some recordings of the Spreckels Organ, and they began to have a change of heart. “We heard the organ, and it did sound like a fine musical instrument. I began to think this outdoor organ thing might not be a crazy idea after all.”

Last October, Prieto Ramírez played a Sunday afternoon recital on the instrument, and he was won over. “I discovered how extremely flexible the instrument is, and that things worked on this organ that never worked on other instruments I had played.”

The instrument, which members of the Spreckels Organ Society will quickly remind you is the world’s largest outdoor organ, may have persuaded the skeptical Prieto Ramírez of its virtues, but the Search Committee for the vacant position of Civic Organist did not need the slightest bit of persuasion once they experienced Pietro Ramírez’s Spreckels performance and his ebullient stage presence.

“Out of a large number of internationally based applicants, the Search Committee unanimously chose Raúl to be the next Civic Organist,” affirmed Jack Lasher, President of the Spreckels Organ Society.

San Diegans can hear their new Civic Organist this Sunday, January 7, at 2:00 p.m. in his first performance as Civic Organist. As of noon, Friday, he was not ready to reveal his complete program—he had only arrived in San Diego the previous evening due to delayed flights resulting from the severe weather conditions on the east coast. “But I will start with J. S. Bach’s Toccata and Fugue in D Minor—the piece everyone knows—and I will include my own arrangement of Freddie Mercury’s Bohemian Rhapsody,” he said.

Like many organists of his generation, Prieto Ramírez has no qualms about arranging popular music for his instrument, although the music he selects needs to have that “undeniable sense of fresh creativity” that he finds in much of the music the late British pop idol’s group Queen. “I also think popular music more easily establishes an instant cultural connection with certain eras, such as the 1940s or the 1960s. The only category of pop music I haven’t found easy to work with is heavy metal, but I haven’t given up trying.”

Audience development ranks high on Prieto Ramírez’s list of accomplishments. Fifteen years ago in the Barcelona suburb of Mataro, he gave an organ recital in a church with a fine instrument on which he practiced regularly.

“I played that July recital simply in gratitude to the church for allowing me to practice there,” he explained. “Each subsequent year when I would perform, the crowds increased, and that is how I came to develop the International Summer Organ Festival and Academy of Mataro-Barcelona.” He added that six years ago, the city was sufficiently impressed with the festival to begin funding it. Drawing advanced students and young professional musicians to the academy, the festival’s public performances regularly attract audiences of 1,000.

Prieto Ramírez experienced similar success in Madrid, where the management of the Spanish National Concert Hall was ready to shut down the hall’s organ recital series because of poor attendance. Taking over the venue’s organ programming and performing, he raised the typical organ recital attendance from a smattering of 25 to 800.

But Prieto Ramírez understands his role as more than filling seats and entertaining audiences. From his mentors Luther Lohmann and Leonid Simtsev he came to understand that the performer has a more significant role to play for society.

“The dignity of this profession is that you are the curator of society’s musical heritage. My goal as San Diego’s Civic Organist is to play music from the various cultures that make up this city, so that everyone will see that the Spreckels Organ is a symbol of what the city is. I believe the music I play can bring people together: from Bach to Queen, music is the great gateway.”