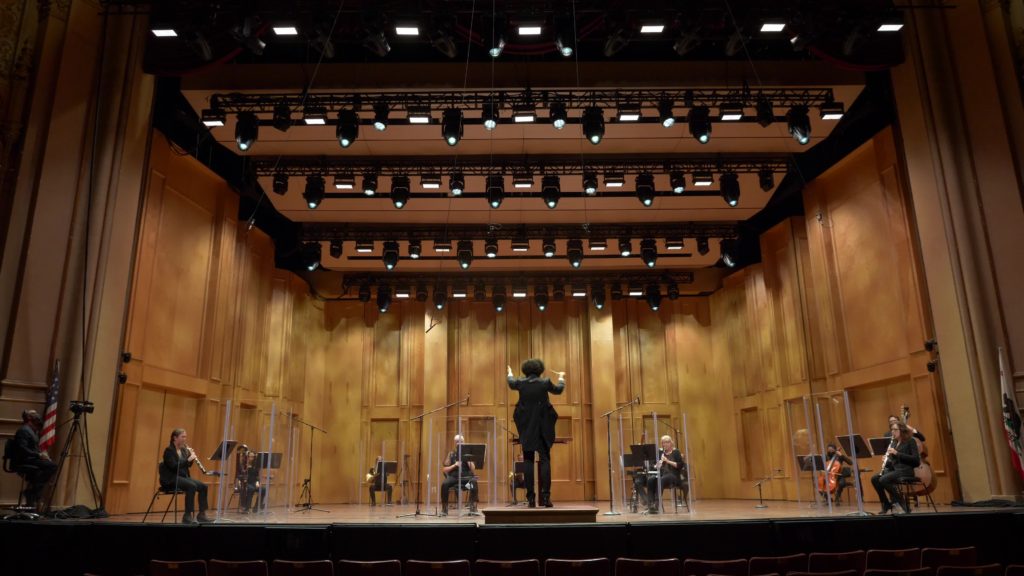 In a short interview offered before the “Elegy” performance, Simon explained that his purpose in writing the work was to honor the memories of Treyvon Martin, Breonna Taylor, Eric Garner, Michael Brown and other African-Americans whose lives were taken from them while their white killers paid no price for their deeds.

Payare and the San Diego Symphony wove Simon’s intense, malleable, and deftly overlapping themes into a burnished threnody, using the strings’ sensuous, resonant sonority to open hearts to the inescapable moral indictment Simon’s work. This young American composer has received commissions from major orchestras and has recently joined the music faculty of Georgetown University. I hope Payare will bring us more of his work in the future.

In Mozart’s day, the serenade was often little more than pleasant background music for dinners and other social functions of the nobility. Fortunately, Mozart infused his Serenade for Winds in C Minor, K. 388, with a slightly dark, serious edge that makes it rewarding concert fare, especially when played by musicians of the caliber of the orchestra’s wind sections. Principle Oboe Sarah Skuster and Principal Clarinet Sheryl Renk did most of the heavy lifting presenting this wind octet’s engaging themes, the role the violins typically play in his string quartets, for example. Under Payare’s buoyant direction, both Renk and Skuster infused the composer’s shapely phrases with uncommon elegance that crowned their colleagues’ meticulous ensemble playing. The sparkling counterpoint of the Menuet and Trio proved especially beguiling.

When music historians describe Tchaikovsky’s Serenade for Strings in C Major, Op.48, as a symphony in miniature, it is difficult to decide whether this is praise or criticism. The composer planned the work on the customary four-movement pattern of a traditional symphony, including a slow movement titled Elegy, which adroitly alighted with Payare’s program theme. His trademark ebullience on the podium and unrelenting drive–as well as the strings’ ardor–offered an ingratiating account of this familiar work. Payare took the second movement Waltz as a fast a tempo that nevertheless retained its graceful melodic design, and his generous rubato ensured stylistic congruence. In the Elegy, the violins have rarely sounded as radiant, and the cellos answered with equally shimmering lines.

In spite of the Elegy’s melancholic moments, the Serenade rarely probes below its sparkling surface satisfaction. Whatever pleasure it provides in the moment, once it is over, there is not much to think about. But given the current difficulty of assembling a full symphonic complement onstage because of the limitations of the pandemic, works like the Serenade become welcome place holders.

This program was filmed in the Jacobs Music Center’s Copley Symphony Hall  in November, 2020, and streamed on Friday, February 26, 2021.