Could the stars have been more aligned at Thursday’s San Diego Symphony concert performed at The Conrad in La Jolla? Allow me to list the superlatives: a winning, beautifully integrated program—the Four Seasons suites of Antonio Vivaldi and Astor Piazzolla—a charismatic young guest conductor, Christopher Dragon; a polished, persuasive guest violinist, Elana Urioste, and the sumptuous, flattering acoustics of The Conrad’s Baker-Baum Concert Hall. In the immortal words of Ira Gershwin, “Who could ask for anything more?” 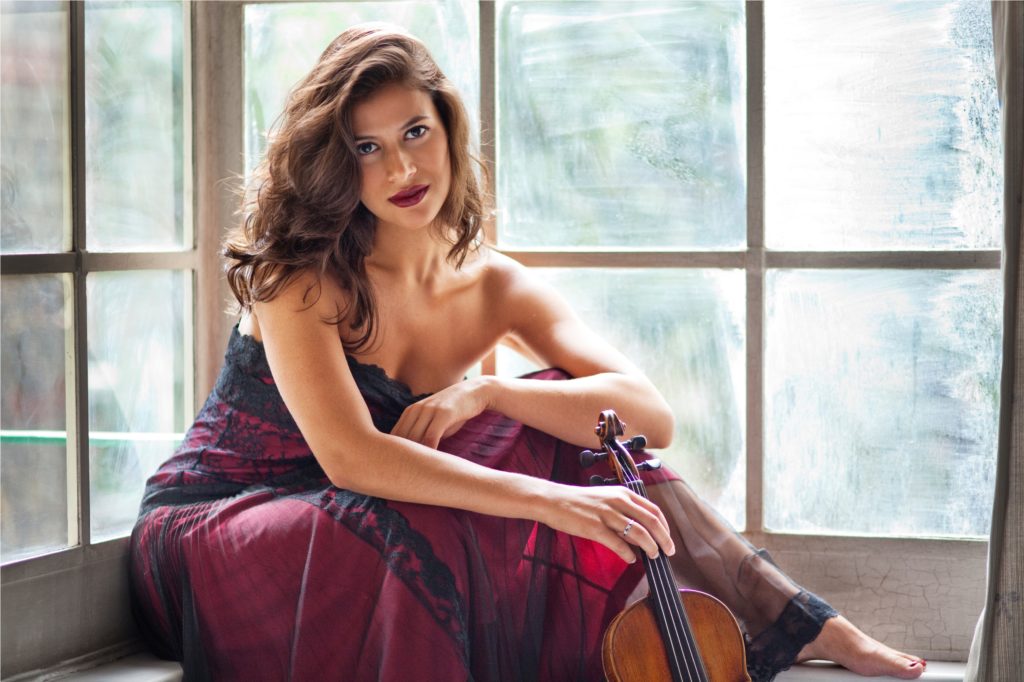 And, yes, the players certainly had rhythm, from Piazzolla’s clever tango syncopations to the blazing metrical flourishes of Vivaldi’s dashing finales. Dragon alternated the Vivaldi and Piazzolla season movements like the layers of a scrumptious Hungarian dobos torte. So the listeners were refreshed not only by the contrasting moods of each season, but also by the alternation of Vivaldi’s predictable Baroque motor rhythms with Piazzolla’s fanciful, unpredictable mood swings. The best of both worlds–a cliche, I know–but true.

Dragon commenced his seasonal journey with Vivaldi’s “La Primavera” and concluded with Piazzolla’s “Primavera porteña,” moving from the Baroque tone painting of twittering birds, babbling brooks and other facets of nature awakening to a late 20th-century urbanscape of carefree banter and slow tangos suggesting sensual encounter.

Some two dozen of the Symphony’s best string players and a guest harpsichordist proved an ideal proportion for realizing Vivaldi’s concertos in the 500-seat Baker-Baum Concert Hall. Dragon favored crisp, even urgent tempos, and his players responded with immaculate ensemble playing and just enough warm color to fill the room with resonant delight. If he did not ask for the more precise short phrasing one hears from period ensembles, their more expansive legato articulation worked well enough for the traditional instruments contemporary orchestral players use.

Urioste’s silvery timbre, her agile and impassioned account of Vivaldi’s sumptuous solo violin flourishes added yet another level of pleasure to these 18th-century Four Seasons. In her several sprightly duos with Concertmaster Jeff Thayer, Urioste felicitously matched his timbre and phrasing, more than doubling our delight in these flights that we experienced with an exciting intimacy that cannot be matched in large concert halls. With the exception of the Los Angeles Philharmonic’s Disney Hall, of course, which has set an impossibly high standard in that category of audience experience.

Piazzolla’s Four Seasons of Buenos Aires began as more intimate chamber music scored with the characteristic Argentine bandoneon—an instrumental first cousin to the accordion—but they have been arranged into concerto-like orchestral versions by the successful Russian film score composer Leonid Desyatnikov at the request of the noted violinist Gidon Kremer. To Piazzolla’s structure of richly textured tangos in various moods, the Russian composer has teased out flashy excursions for the violin soloist, which Urioste dispatched with elan. In Piazzolla’s lively “Verano porteño,” or summer in Buenos Aires, Desyatnikov has deftly woven in quotations from the corresponding Vivaldi work, notably in the violin cadenza.

I would be remiss if I did not applaud Principal Cellist Yao Zhao for his bravura solos, a probing cadenza in Piazzolla’s “Otoñeo porteño” and a sparkling solo trio in Vivaldi’s summer concerto with Urioste and the guest harpsichordist.

This concert opened with Osvaldo Golijov’s “Last Round,” a single movement musical tribute to Piazzolla started in 1992—the final year of his life—but completed by younger Argentine composer in 1996. Because it was originally composed for two string quartets and a contrabass, it displayed an unusual structure. For most of the piece, the eight San Diego Symphony string players in the front row essayed the rapid, unrelenting and aggressively contrapuntal themes, eventually joined by the rest of the onstage strings in a quieter, somewhat elegiac, postlude. This 15-minute work struck me as a passionately crafted study of conflict and resolution, although I imagine it would take a few additional hearings to unravel its complexities.

This concert was present by the San Diego Symphony on Thursday, February 3, 2022, at La Jolla’s Conrad Prebys Performing Arts Center; it will be repeated on February 4 at Rancho Santa Fe’s Village Church and on February 5 at Southwestern College in Chula Vista. The program returns for a final performance on February 6 at The Conrad in La Jolla.