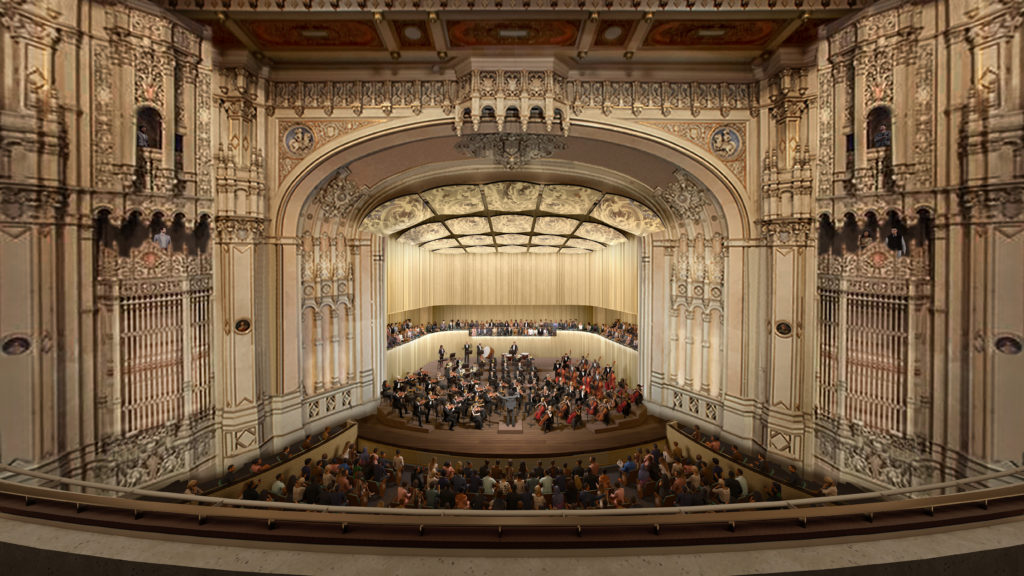 “Our goal is to be a 21st-century orchestra in tune with the San Diego community,” said Martha A. Gilmer, C.E.O. of the Symphony. “While this renovation represents a significant reinvestment in downtown San Diego, the heart of the renovation of the hall is the improvement of the sound.”

In 1986, the San Diego Symphony acquired the historic Fox Theater building at Seventh and B Streets and restored the aging 2000-plus seat movie house with modest alterations to provide a concert venue for the orchestra. While audiences have appreciated the ornate decor of the hall’s Spanish Baroque movie palace interiors, a major drawback has been the hall’s disappointing, uneven acoustics. Under the direction of Rafael Payare, who became Music Director in 2019, the orchestra has improved significantly.

With its sophisticated sound system, The Rady Shell at Jacobs Park—the Symphony’s impressive new outdoor venue that opened in August of 2021—has demonstrated the Symphony’s increased interpretive artistry and sonic prowess.

“We have already see the impact of The Rady Shell at Jacobs Park on our musicians, our audiences, and the people of San Diego,” noted Rafael Payere. “To have the opportunity to improve the beautiful hall we call home and to improve the musical communication on stage with the musicians, as well as to create a more intimate connection with our audiences is a fantastic dream.”

Realizing this dream is the responsibility of a team: the architectural firm HGA, the acousticians of Akustics, and theater planners Schuler Shook.

But he made it clear that “correcting the acoustics of the hall” is the top priority, and that will require some significant structural changes. The most significant change will be permanent alterations to the stage itself.

“The current movable shell will be replaced by a permanent, fixed stage enclosure with twenty tunable acoustical reflectors placed at the top of the stage area,” said Frane. They will also construct a “choral terrace” placed slightly above the players along the back and sides of the stage enclosure; this will seat up to 75 singers and will allow the orchestra to present large choral oratorios as well as symphonic repertory that calls for chorus. When no chorus is needed, this will allow additional audience seating, an architectural accommodation for choirs and audience members that is a successful part of the design of Disney Concert Hall in Los Angeles. 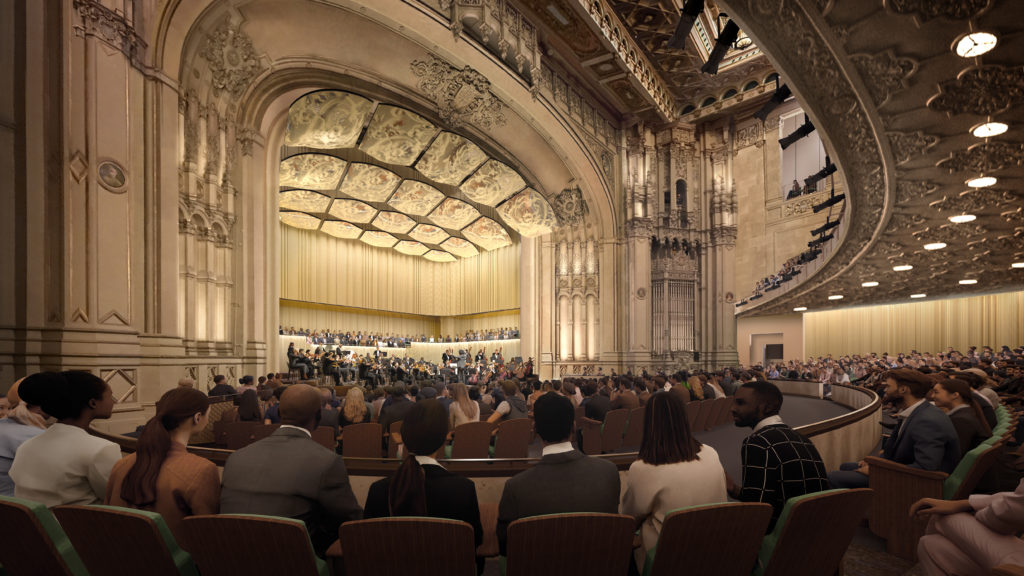 Frane explained that the most significant structural change to Copley Symphony Hall, however, will be removing most of the main floor seating underneath the balcony—a section Copley Symphony Hall that seasoned concert-goers wisely avoided because of its poor acoustics—and installing a sound reflecting acoustic screen along the rear of this shortened section of the main floor. The main floor will be raised to stage level, and the seating configured in a semi-circular design that will allow all audience members to be oriented to the stage.

Frane said that with some modest additions to side balcony seating upstairs, the total seating capacity of the renovated hall would be 1750.

This sound screen, which Frane said his firm has successfully used in other concert hall renovations, has three components. The screen itself is a visually attractive sound-permeable metal mesh; behind the screen is a hard reflecting wall that gives the room brighter, live acoustics, as well as a sound absorptive curtain that can be lowered between the mesh and the wall to make the room less acoustically live, a characteristic prized for highly amplified concert presentations.

In his opening remarks yesterday, Symphony Board of Directors Chair Harold Fuson, Jr. stated, “This transformation of the Symphony’s home, however, will respect both the history and aesthetics of the hall.”

A brief tour of Copley Symphony Hall after the conference revealed that the preparations for renovation had already commenced, with all of the audience seating removed and the stage area stripped back to its structural skeleton.

“We intend to complete this renovation by the fall of 2023,” said Gilmer, adding that an explanation of the funding process for this renovation project would be revealed at a later time.

The San Diego Symphony press conference was held at the Jacobs Music Center on Wednesday, February 23, 2022.