While the San Diego Symphony’s downtown home, Copley Symphony Hall at the Jacobs Music Center, is under major renovation, the orchestra has been performing in various venues throughout the county. Thursday, I heard this week’s musical offering under the baton of guest conductor Ankush Kumar Bahl, at the Joan B. Kroc Theater in La Mesa.

A comfortable, well-designed hall, the Kroc Theater is a bit smaller than the Baker-Baum Concert Hall at The Conrad in La Jolla, but its crystal clear acoustic provides the audience an even more intimate sonic engagement with the performers. Bahl, a California native who is currently Music Director of the Omaha Symphony, led a  judiciously chosen program that fit the Kroc Theater nicely: a Rossini overture, a Mendelssohn symphony, and a  concerto for contrabass and chamber orchestra by Andrés Martín. 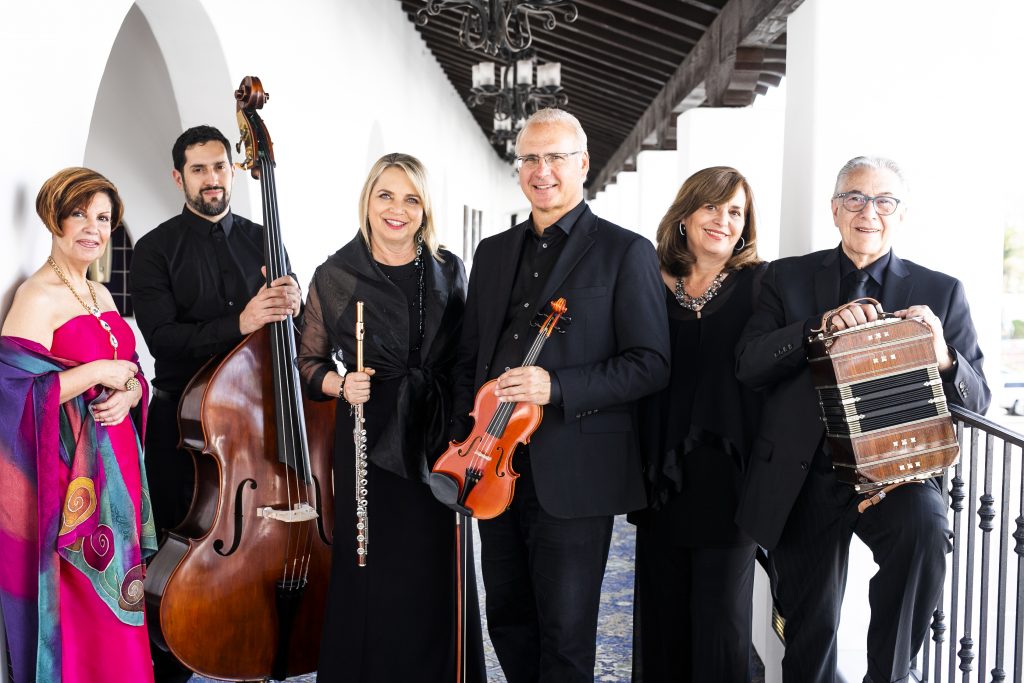 In this 2020 CAMARADA photo, bassist and composer Andrés Martín is second from the left  [Photo courtesy of Camarada] 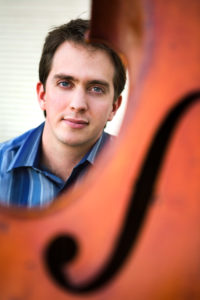 Bahl and the orchestra proved enthusiastic co-conspirators in Martín’s concerto, a high level of commitment which is always present when one of their own takes the solo. In the “Nocturno,” Principal Harp Julie Smith Phillips crafted a magical harp ostinato that deftly contrasted with the dreamy main contrabass theme, and in the final movement, the percussion battery worked overtime to create the vibrant Latin American rhythmic drive the composer so skillfully employed. Throughout the concerto, each first-chair woodwind player turned out a continuous array of opulent themes.

Bahl’s account of Felix Mendelssohn’s “Italian” Symphony exuded the panache and effervescence that define the work. When young Felix was composing the symphony, he wrote his sister Fanny, “It will be the jolliest piece I have ever done.” Of course, he had not yet conceived the solemn processional that became the heart of his second movement, the “Andante con moto,” but the drive of his outer movements puts most listeners in a favorable mood.

My sole cavil with the orchestra’s vibrant performance is just that—it was too bold for the modest size of the Kroc Theater. Because I was seated in Row F,  no more that 20 feet from the first violins, and I thought their muscular tone had too much bite. Just two months ago, the orchestra was back playing in Civic Theatre, and they clearly needed this forceful sound to fill that cavernous 3,000 seat hall. But in the Kroc Theater, which only seats a few hundred, less could have been so much more.

Had not Jahja Ling, the San Diego Symphony’s former Music Director, so frequently opened his concerts with a Rossini overture, I could be more enthusiastic about Bahl opening this program with Rossini’s Overture to his opera The Italian Girl in Algiers. The orchestra’s brisk, sprightly performance gave the work everything it required. But if I am going to sit through a Rossini overture—I would rather hear the whole opera.

The San Diego Symphony presented this concert on April 20, 2022, at Escondido’s California Center for the Arts and on April 21 at La Mesa’s Joan B. Kroc Theater. It will be performed again as a matinee on April 23 at the PHAME Performing Arts Center in Del Cerro.