Ebenezer Scrooge’s BIG San Diego Christmas Show has returned to The Old Globe to chortles and smiles. For San Diego locals who like to poke fun at themselves, this might just be the Christmas Carol to attend in its run through Dec. 24 in Balboa Park. 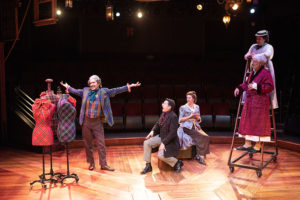 Dickens’ “A Christmas Carol” is a bit spooky, truth be told. The Victorian novella is, after all, a tale of a miserly old grouch being visited by his former business partner (bound in chains for eternity) and a series of three ghosts. And, while there are any number of adaptations of this production (the program for Ebenezer… features 18 alone!), they do not all qualify as family-friendly. This one is, however, and it’s a good thing, given the number of youth in the house.

Written by Gordon Greenberg and Steve Rosen and performed in the round in the Sheryl and Harvey White Theatre, this show is light on gimmicks while instead entrusting its five-person cast to the heavy load of playing the many, many characters of the story (and singing, dancing, and playing instruments as well!).

Banker/lender Ebenezer Scrooge, a San Diego resident, is played quite skillfully by Bill Buell. We believe that Buell is the baddie, watching his interactions with his clerk Bob Cratchit (Christopher M. Ramirez), nephew Fred (Dan Rosales), and Saint sisters (Elizabeth Nestlerode and Jacque Wilke); he is an irascible curmudgeon and unapologetic about it… that is, until the ghosts take him on a trip through his past, present, and future. 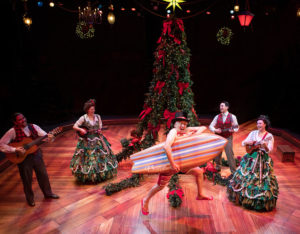 In keeping with the humor of this script adaptation, said ghosts are irreverent, mouthy, and unhelpful along the way; one chides him for his ask to extend the time spent in his memories, while another (dressed in a hot pink denim jacket with bling letters spelling “PRESENT”) snaps photos and videos of his visible discomfort for Instagram. The script is also peppered with cliché San Diego jokes (“You can tell the Padres they came close…” and “We exist, but we’re hard to find like parking for December Nights.”) as well as references to countless other events, locations, and businesses that had the audience chuckling throughout the show. 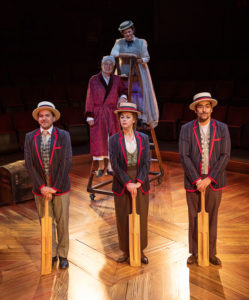 With deceptively simple-looking transitions, the ever-changing setting of the play are tackled creatively under the watchful eye of writer/director Greenberg. The director’s vision, complete with rolling door frames and ladders, antique chests (that convert to a fireplace, bed, and coffin), dress forms, puppets, and lanterns that flicker, alight, and change color before being snuffed out, never loses momentum as Scrooge careens ever nearer to his fate. To this end, Amanda Zieve, lighting designer, has really done outstanding work in creating situational lighting in a challenging space that helps maintain that forward movement of the story. And despite the fact that the set is kept generally simple (to great effect!), it is of note that scenic designer Adam Koch has one fun surprise up his sleeve… this appears just around the time when Scrooge discovers that he has a heart for others AND for theatre, after all… that is to say, his moment of redemption.

While inspired in storyline by a holiday classic we all know and love (and, honestly, have seen seemingly too often), Ebenezer Scrooge’s BIG San Diego Christmas Show, running through Dec. 24, manages to achieve something unique: namely, it’s a cleverly staged San Diego-specific rendition of a time-honored classic that reminds us all why San Diego (and the holidays) are so special after all.