Just because nearly every opera fan loves Tosca does not guarantee the success of every new production of Puccini’s sexy melodramatic tragedy. But San Diego Opera’s season-opening Tosca on Saturday (February 13) got everything right: a strong cast both vocally and dramatically; swift, uncluttered stage direction; a sensitive but unrelenting conductor in the pit, and a smart period set with attractive costumes. 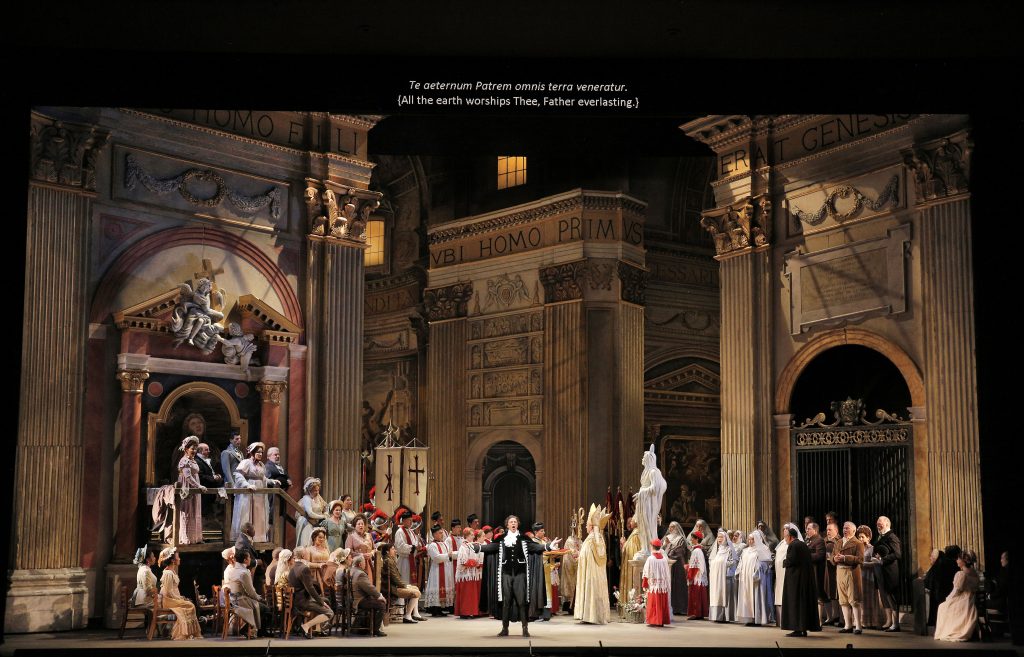 The substantial Civic Theatre audience roared its approval of Tosca, and with good reason.

Asking an operatic soprano to play a successful operatic soprano does not constitute a massive dramatic challenge, but Greek soprano Alexia Voulgaridou took her Tosca on a deftly calibrated journey from self-absorbed, flighty diva to scheming, take-charge murderer. She was vocally convincing from the outset, however, and her creamy, substantial lyric soprano matched the other strong lead singers. I would give her high marks for supple phrasing always sympathetic to the composer’s emotional cadences, but I was disappointed that her top did not display more float, that buoyant quality that would have made her “Visse d’arte” aria transcendent. 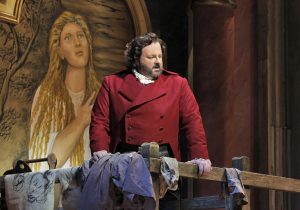 In his local debut, Welsh tenor Gwyn Hugh Jones as Tosca’s lover Cavaradossi brandished a brilliant, Italianate sound that captivated my ear from his first notes. This tenor is rich and stirring throughout his range, and his top notes bloom gloriously without the slightest sense of strain. His grand gestures fit his character’s fatal overconfidence, yet he did not overlook subtlety, as in his bemused exasperation with Tosca’s fits of jealousy. And his final aria “E lucevan le stelle” proved as touching and heart-rending as I have heard. 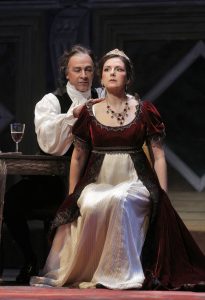 What is there not to like about Greer Grimsley’s Scarpia? He fine-tuned each diabolical facet of Rome’s villainous Chief of Police—including treachery, piety, sadism, and lechery—yet he managed to mesmerize us with every movement and every phrase. His powerful bass baritone rang throughout the hall, but never overpowered either the line or the moment’s emotional quotient, and his vivid declamation brought the climax of the first act—full chorus over roiling orchestra—to a thrilling conclusion.

The fine supporting cast included veteran San Diego Opera comprimario singers tenor Joel Sorensen as Spoletta, Scarpia’s number one henchman, and bass-baritone Scott Sikon as the bumbling Sacristan of the church where Cavaradossi is painting the altar portrait. Each gave stylish, well-proportioned performances, as did bass-baritone Kristopher Irmiter who did double duty as the fugitive Angelotti and Sciarrone, Scarpia’s other agent. Newcomers Johnnie Bankens as the Jailer and mezzo Bridget Hogan as the offstage Shepherd Boy whose song opens the final act each showed promise.

Although Charles F. Prestenari’s opera chorus has a modest role in this opera, its dramatically pivotal “Te Deum” sounded robust and inspiring, and the Children’s Chorus fulfilled our expectations exuberantly.

Stage Director Lesley Koenig, who directed the stunning production of Verdi’s A Masked Ball in the 2014 season, returned to work her magic on Tosca. To maintain an exciting but never breathless dramatic pace, she was aided by Italian conductor Massimo Zanetti, who also conducted A Masked Ball. Koenig constructed the huge choral procession (the grandiose “Te Deum”) at the end of Act I with just the right amount of movement to give a proper sense of solemnity and grandeur instead of the usual fussy congestion that always works against the composer’s clear intentions.

Zanetti brought out virile, tightly focused playing from the orchestra, especially the brass accents and letimotifs that move the plot forward.

Andrew Horn’s traditional period set, originally made for New York City Opera, gave us an impressive church interior for the first act, although I thought Cavaradossi’s portrait of Mary Magdalene was too informal for a liturgical painting. Scarpia’s capacious office, however, with its grand fresco and minimal accoutrements clearly communicated the amount of power the Chief of Police wielded in Rome. Andrew Marley’s costumes, also designed for New York City Opera but refurbished by Seattle Opera, stressed lighter hues that gave welcome relief from the vast scenic proportions.

Before the performance began, General Director David Bennett gave a preview of what the 2016-17 San Diego Opera season will look like, opening in October, 2016, with a production of Rossini’s La Cenerentola at Civic Theatre, followed in November by a new opera staged at the Balboa Theatre. He noted that a total of five operas will be staged by the company in the upcoming season. On another topic dear to the hearts of San Diego Opera patrons, Bennett stated that the company had balanced its books for the last two seasons without using money from the company’s reserve funds.

More detailed descriptions of the 2016-17 season are due to be released soon, he added.