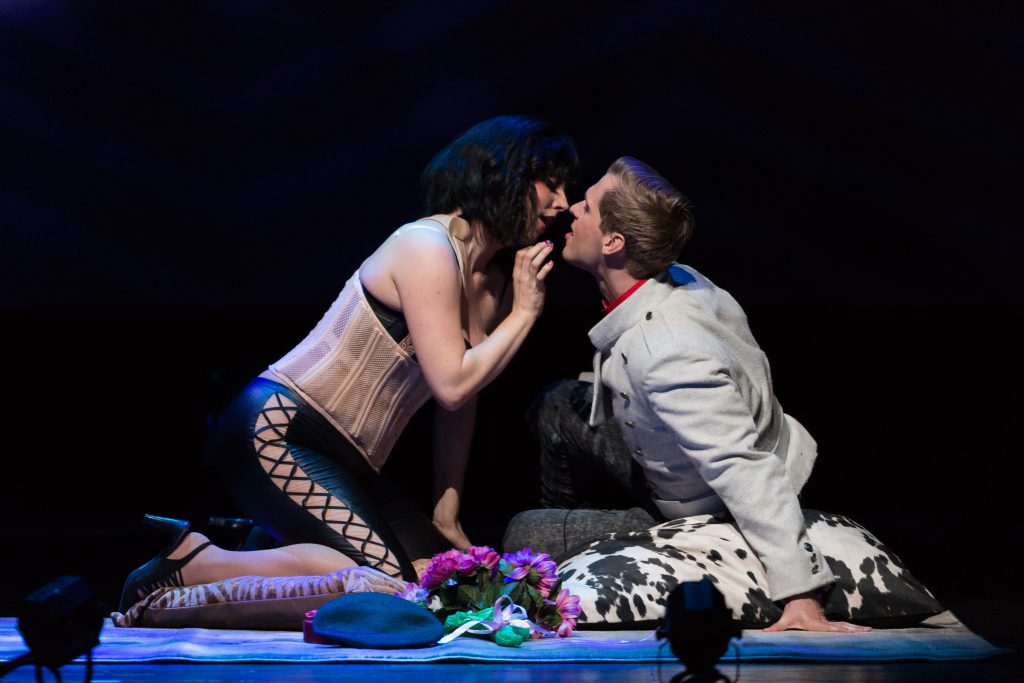 Reducing Bizet’s music and drama to the four principal singers and a few ancillary non-singing characters, Brook’s adaptation focuses entirely on the lovers’ fated, emotion-driven power struggles. As compelling drama, this approach works most of the time, although the opening scene is the chamber opera’s weakest moment.

Seated on a park bench on an empty stage, we first encounter Micaëla, who begins to look for her intended Don José in imaginary cracks and crevices. This was the one time I sorely missed Bizet’s colorful crowd scenes, the busy town square in which Micaëla vainly encounters the milling townsfolk and military officers waiting for the young women from the cigarette factory to come out on break.

But once Don José and Carmen enter the picture, the verbal sparring among this toxic love triangle takes off, with Carmen and Micaëla ending up in a literal fight on the stage floor. Fortunately, by this point of the opera we have heard and are appreciating the excellent voices singing Bizet’s memorable arias: Adrian Kramer’s clarion but fresh, youthful tenor that gives Don José a cachet we would otherwise deny this callow youth and Andriana Chuchman’s gleaming, generous soprano as Micaëla, a voice that makes us root more earnestly for this naive, homespun girl who has just lost her lover to the daemonic gypsy.

Mezzo-soprano Peabody Southwell relied more on her dramatic prowess than vocal allure to define Carmen as the strong but desperate character Brook intends us to see. Rather than toying with easily manipulated men—a typical pretense of singers who portray Bizet’s Carmen—Southwell channeled a portion of Alban Berg’s Lulu to reveal the terror behind the mask of her audacious vixen. 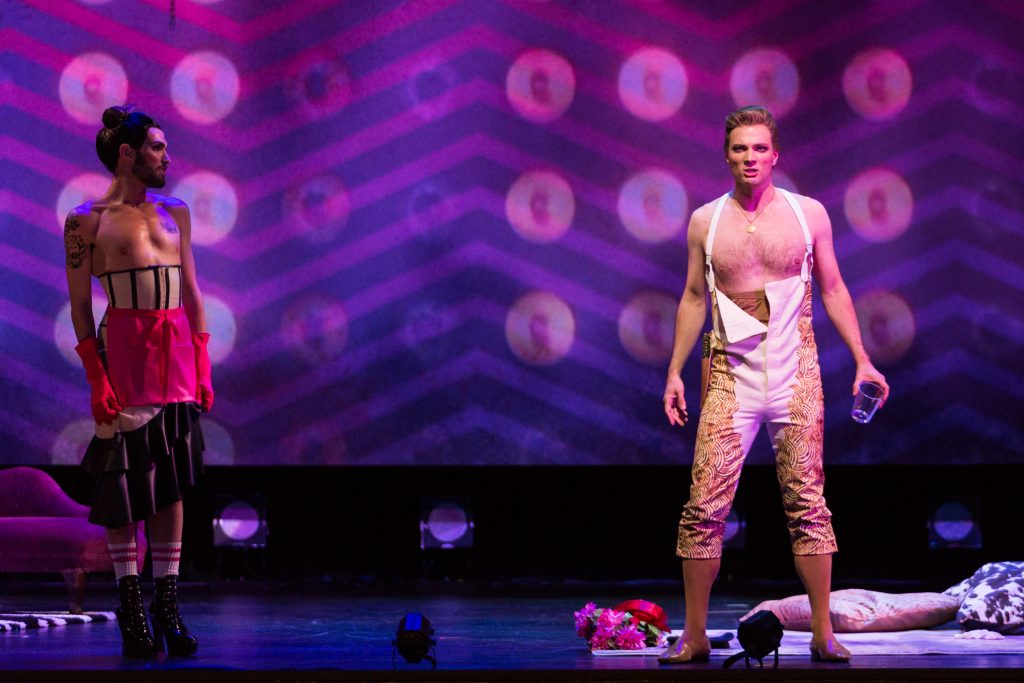 As the macho matador Escamillo, bass-baritone Ryan Kuster cut a striking figure and gave persuasive shape to Bizet’s melodic taunts, although he did not fill the room with the exciting vocal color of either Kramer or Chuchman.

Director Alexander Gedeon cleverly chose Max Cadillac as his Lillas Pastia, Carmen’s girlfriend who presides over the tavern where Carmen provokes Don José’s jealousy by expressing her attraction to Escamillo. And Gedeon has upgraded the musty roadside tavern to a less than chic contemporary sex club—thank you scenic designer Yuki Isumihara for the perfect hot pink bean bag as the most prominent piece of the sex club furnishings!

However, I think Gedeon compromised Cadillac’s character by giving him too many contrasting tics. At first he appeared sultry, then skittish; sometimes bold and sometimes coy. The audience took Cadillac as mere comic relief, which diminished Brook’s intended emotional crescendo.

About Gedeon’s decision to drop the final curtain just before Don José stabs Carmen, I am uneasy. We know this is going to happen—that is the dramatic point of both Bizet’s and Brook’s work. But why must we just imagine it?

In the pit, Christopher Rountree fused a potent, polished response from the 15 members of the San Diego Symphony, a grander and more flexible sonority than might be expected for such a modest number of instrumentalists. His choice of tempos was always spot-on, and he gave his singers admirable support.

Izumihara’s aptly minimal stage design fit well Brook’s pared-down aesthetic. The pile of detritus out of which Carmen climbed at the opening of the opera could have come from that nearby quarter of downtown where our homeless citizens camp out. Adam Alonso’s extravagant, eye-popping costumes contrasted superbly with Izumihara’s grunge-inspired hues. And the stunning digital video designs that glowed across the back of the stage—joint concepts of Izumihara and Alonso—aptly captured in bright hues and vivid abstract patterns the emotional quotient of the opera’s action at that time.

This production, the grand finale of this year’s inaugural Shiley dētour Series, clearly points San Diego Opera in a welcome new direction: a bold piece with strong, concept-driven direction and skilled singers with compelling dramatic presence to realize this genre of opera. What better complement could be found to the standard repertory the company continues to cultivate with equally high standards at Civic Theatre?