Observing Veterans’ Day can all too easily open the floodgates of sentimental, flag-waving patriotism. San Diego Opera’s production of composer David T. Little’s Soldier Songs honored the day with an honest, in-your-face confrontation of what war does to the soldier. Superficial sentiment and easy patriotism were nowhere to be found. 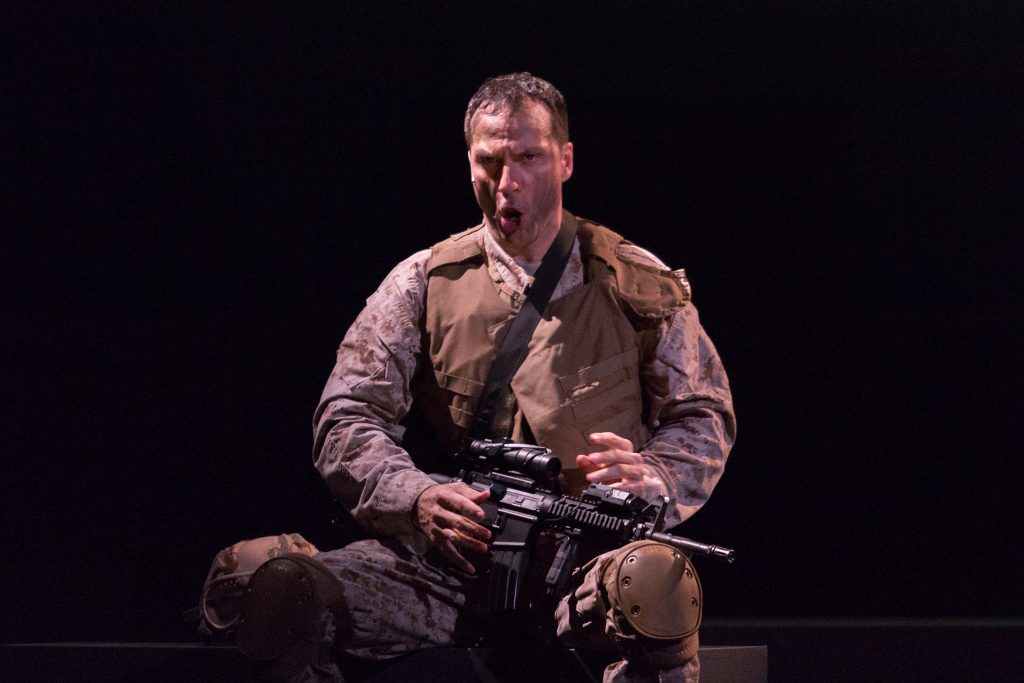 From Claudio Monteverdi’s groundbreaking Orfeo (1607), operas have been plot-driven, and the very notion of opera has been aptly summarized by the phrase “drama through music.” In Soldier Songs, however, the drama is psychological, with the sole singing character, the admirable baritone David Adam Moore in this production that originated at Atlanta Opera, giving voice to the words of actual soldiers and veterans.

“Words,” of course is an inadequate term. These quotations, many of which were projected onto the set, are actually the fears, the aspirations, the confusions, and the confessions of soldiers. Little served as his own librettist, weaving together transcriptions of some five years of interviews he conducted with men and women either in or released from military service.

Powerful, unsettling, and heart-rending only begin to cover the gamut of emotional responses from Little’s music, a sophisticated fusion of Expressionist edge with the grit of hard rock. In the pit of the Balboa Theatre, a mere seven San Diego Symphony instrumentalists under the immaculately precise direction of Steven Schick produced walls of sound to evoke the chaos of battle as well as minimalist moments of transcendent introspection.

The most traditional aspect of this hour-long chamber opera is its vocal line, which demands not only a wide range but the ability to sustain a broadly arched theme with great power. Moore, whose muscular baritone sails through verismo roles with menacing beauty (he was a knockout Silvio in San Diego Opera’s I Pagliacci a few seasons back), held the audience in the palm of his hand from beginning to end. His empathy for the soldiers’ wide emotional compass propelled the music relentlessly, as did Tomer Zvulun’s athletic direction on the abstract, multilevel set. 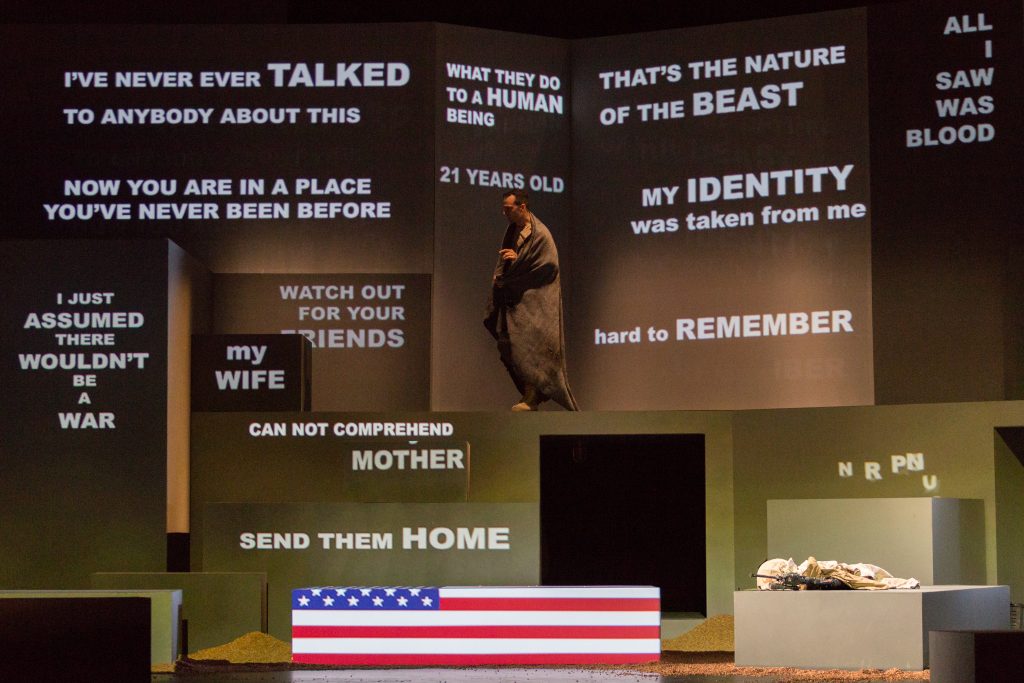 With constantly varied, dramatic projections on the set—they ranged from immense conflagrations to battle scenes to the placid starry night sky—the production visuals effectively pulled the audience into the soldiers’ physical and psychological milieu. Design credit is shared by Moore, Victoria “Vita” Tzykun, and GLMMR, a New York based tech company. And Maxwell Bowman’s inventive lighting included flashing strobe lights in the audience area to bring the viewers more effectively into the actors’ circle. This is no production for passive, uninvolved viewing. 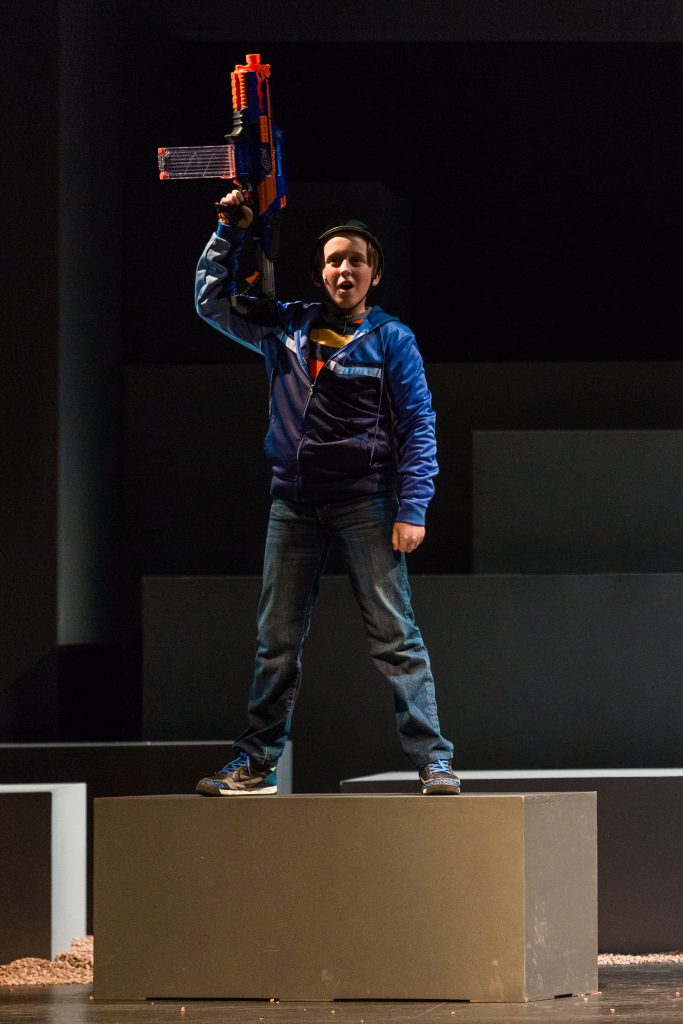 On stage, Moore was assisted by two actors, Ryan Singer as the exuberant youth naively playing with his plastic war toys (“I’m killing the bad guys with the funny names.”) and Dan Denison, the pensive elder in a less clearly defined stage presence.

Soldier Songs ends quietly, inconclusively, perhaps an enticement for the audience to come back for the panel discussion about the opera and the concerns it raises. Four local military veterans seated at a table on the set carried out the discussion, and although I won’t attempt to list the varied topics covered, frequently with some eloquence, one observation from a retired career Marine Corps officer stood out: when society does not find ways to tap and employ that vast reservoir of skill and dedication members of the military have acquired in their service, we foolishly squander not only these individuals but a precious resource for the community.

[themify_box style=”shadow” ]San Diego Opera’s production of Soldier Songs by David T. Little opened at the Balboa Theatre in downtown San Diego on November 11, 2016, and was reviewed on that night. It will be repeated at 7:00 p.m. on November 12 in the same venue and presented in LIVE TELECAST on KPBS TV. The final performance will be at the Balboa on Sunday, November 13, at 2:00 p.m.[/themify_box]