The subject of Laura Kaminsky’s unabashedly topical opera As One easily stirs up controversy. But even if you subscribe to that dated Louis B. Mayer sneer about “leaving the messages to Western Union,” this one-act opera that recounts the self-discovery of a transgender woman is a gorgeous and emotionally compelling opera. And San Diego Opera has paid Kaminsky’s 2014 work the highest compliment by mounting a transfixing production featuring two magnificent singers and the ebullient Hausmann Quartet. 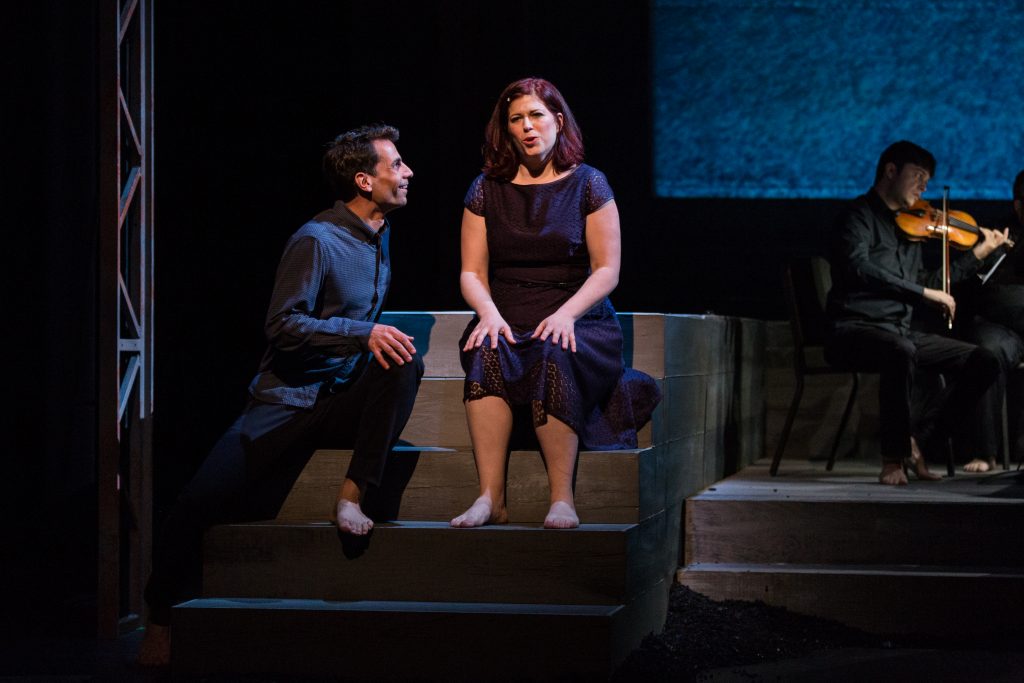 In this abstract but highly energized production directed by Kyle Lang, baritone Kelly Markgraf and mezzo-soprano Blythe Gaissert embody Hannah, the opera’s protagonist, as the conflicted, passionate youth whose coming of age is complicated by a growing awareness that her outer physical identity and her interior psychological identity are in conflict. And although we hear more of Markgraf in the first part of the opera and Gaissert dominates the second half, Kaminsky has deftly interwoven the voices so they are not reduced to mere before and after representations.

Markgraf and Gaissert could not have been more ideally paired. Each displayed a rich, alluring instrument that easily commanded the capacious Joan B. Kroc Theatre. Markgraf’s resonant baritone combines the darker hue we associate with strong bass-baritones with a penetrating tenorial edge that splendidly articulated both the text and its potent emotional drive, and Gaissert’s creamy mezzo-soprano took on a delectable brightness in the ecstatic melismas Kaminsky gave Hannah in her most joyful moments. I pray that the company’s General Director David Bennett has signed up these accomplished singers for many return visits to San Diego Opera! 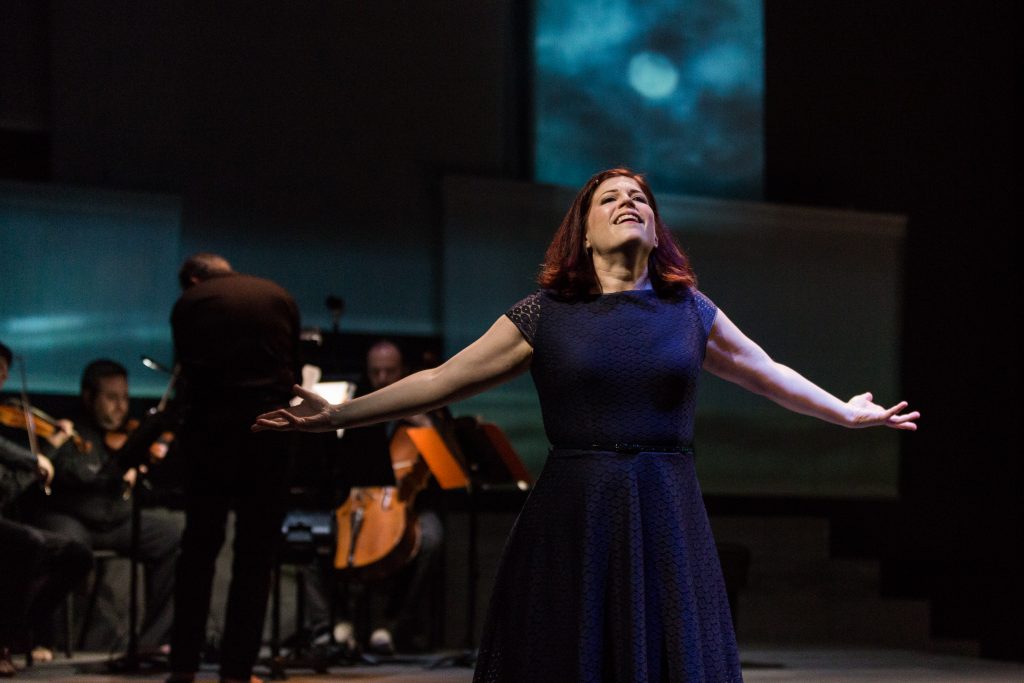 I must confess that the artistic decision to reduce a chamber opera’s accompaniment to a mere string quartet did not excite me—but I had seriously underestimated Kaminsky’s consummate skill handling instrumental texture and color. In her complex yet miraculously varied orchestration I heard the brilliant structural architecture I associate with Dmitri Shostakovich’s great string quartets modified by a more ingratiating melodic line that American composers such as Ned Rorem and John Corigliano have cultivated. 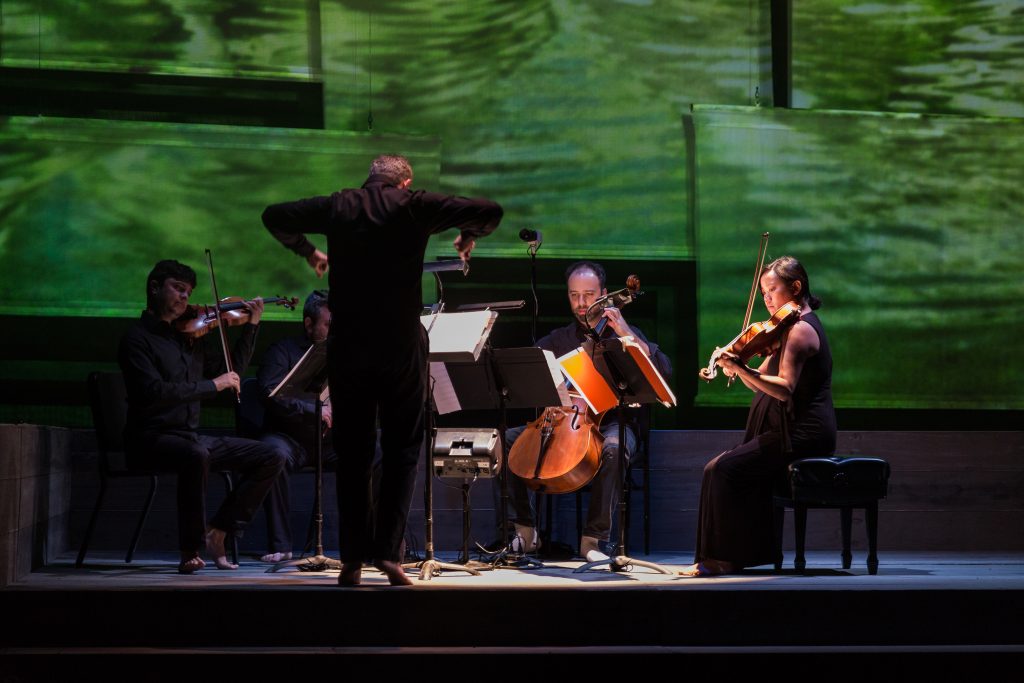 Under the astute direction of Bruce Stasyna, the Hausmann Quartet gave an exciting, muscular account of this amazing score. In a laudable series at the San Diego Maritime Museum on San Diego harbor, Hausmann is presenting the complete canon of Haydn string quartets, but Kaminsky’s score revealed this ensemble’s blazing virtuosity in a way that the staid classical repertory cannot. Hausmann has given glimpses of this capacity performing works by Thomas Adès and short pieces by other contemporary composers, but the extensive, kaleidoscopic As One score revealed the quartet’s potential as major proponent of contemporary music.

The librettists Mark Campbell and Kimberly Reed tell the story of As One in a chronological series of flashback songs that begins with the teen-aged Hannah working a paper route and ends with her self acceptance on a solo vacation to a remote Norwegian forest, but because there are no other characters, the staging possibilities are severely limited. Lang has solved this challenge keeping his singers in constant movement around Jonathan Gilmer’s simple but effective abstract stage design that allowed the singers both to circle behind the onstage instrumentalists and to come quite close to the audience at the edge of the stage. At times the singers worked in intimate proximity, but even when they were placed at opposite sides of the stage, they vividly communicated their strong connection.

Large video projections, also the handiwork of Kimberly Reed, on five asymmetrically placed screens at the back of the stage helped focus both mood and location for each segment of Hannah’s journey, from a close-up of the paper route bicycle’s front wheel to the brightly-colored streetcars of San Francisco’s Market Street to the idyllic Norwegian nature stills.

It would be easy to credit the 14 and counting different productions of As One presented since its 2014 debut on the economy of the work’s compact dimensions. But the depth of its emotional journey and the dramatic immediacy of Kaminsky’s music are its winning calling cards. Unlike too many new operas, it is easy to feel as one with this amazing musical production.

San Diego Opera produced “As One,” the first offering of the company’s 2017-18 Detour Series, on Friday, November 10, 2017, at the Joan B. Kroc Theatre at the Salvation Army Kroc Center, 6611 University Ave., San Diego, CA. Two more performances will be offered November 11 & 12 in the same venue.