San Diego Opera’s robust, rambunctious production of Verdi’s only successful comic opera, Falstaff, gave the company the luxury of having its proverbial cake and eating it too! To the delight of the upper galleries, French stage director Olivier Tambosi pumped up the physical comedy of an opera whose libretto already abounds in outsize humor. 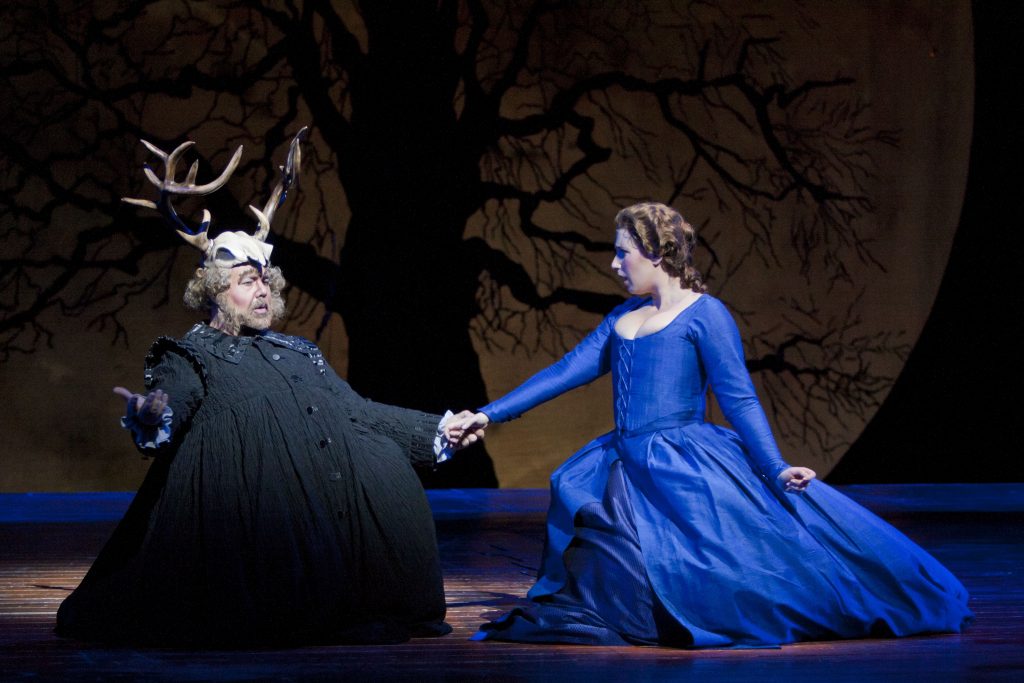 And to the great satisfaction of the connoisseurs who admire the beauty of Verdi’s score, the company assembled a cast of outstanding voices, starting with the resplendent baritone Roberto de Candia in the title role. His rich voice rolled through Civic Theatre without a hint of stress, ennobling the ardor, the boasting, and eventually the misery of Shakespeare’s rotund and decidedly over-the-hill knight.

Appreciating even as excellent a production of Falstaff as this one requires a certain recalculation of Verdian expectations. In his final opera, Verdi not only looked back to the Monteverdian ideal of drama speaking continuously through the music but also to Wagner’s later through-composed operas where the traditional clear-cut divisions between the active speech of recitative and the static reflection of the solo aria are erased.

So although Falstaff boasts a few extended soliloquies—the title character’s “Honor” monologue in the first act; Ford’s impassioned anger arioso in the second act, and Fenton’s love sonnet in the third act—there are no star-turn arias that mellifluously define a character, such as Violetta’s “Sempre libera” or Radames’ “Celeste Aïda.” Fortunately, Verdi’s ample melodic invention animates the whole opera, especially heightened ensemble moments such as the sumptuous unaccompanied quartet in the first act in which Alice Ford, the primary object of Falstaff’s amorous intentions, and her female compatriots confect their plot to bring down Falstaff.

As Alice Ford, Ellie Dehn’s soaring, elegant soprano illuminated every scene blessed by her presence, and the lighter but equally fluid soprano of the young Maureen McKay as her love-struck daughter Nannetta proved an ideal match. Mezzo-sopranos Kirstin Chávez as Meg Page and Marianne Cornetti as Mistress Quickly added complementary well-focused voices to their vibrant soprano counterparts, although Verdi provided only Cornetti as Mistress Quickly sufficient solo moments to prove the extent of her vocal prowess. 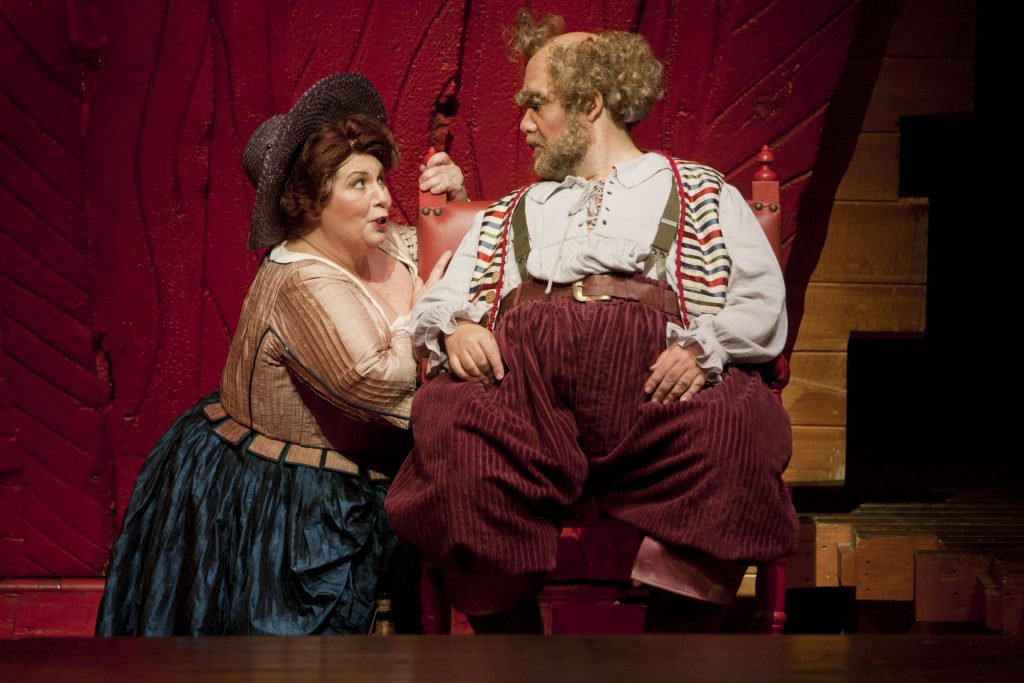 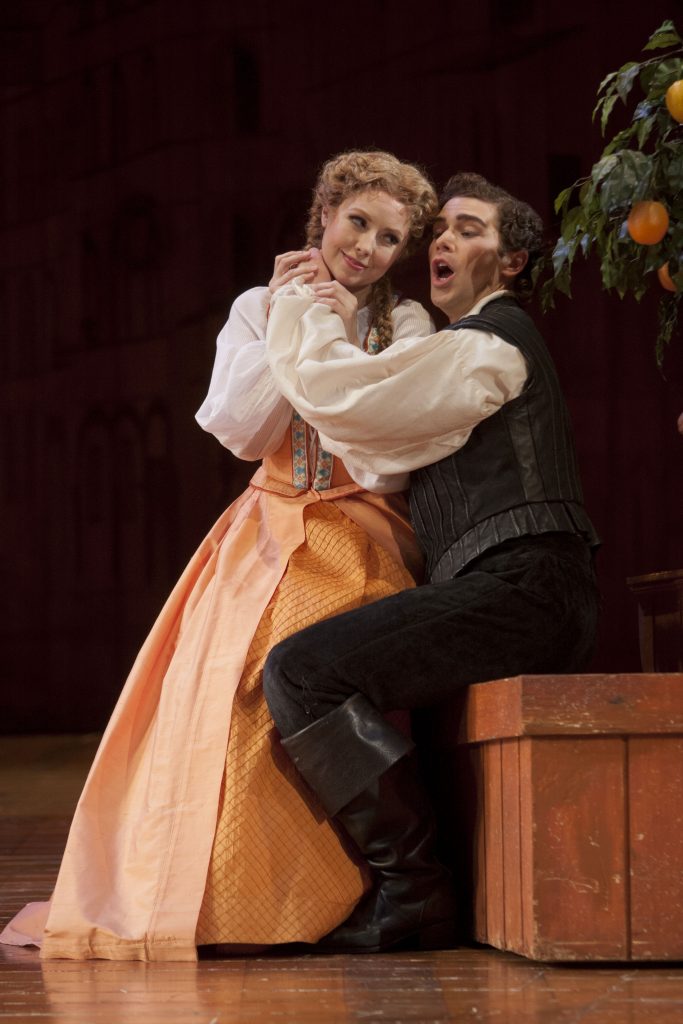 Director Tambosi created his rollicking conception of Falstaff for Lyric Opera of Chicago in 2003, and that company had the San Diego Opera Scenic Studio build the production’s unit set, so in a certain way this production was a homecoming. The wide, uncluttered set gave Tambosi room for busy, manic crowd scenes and all kinds of comedic shenanigans. Falstaff’s private room at the Garter Inn conveniently popped up from floor of the center stage, like a clever child’s toy, and disappeared back into it with ease.

I will grant that the opera’s book certainly welcomes the energy and vivacity Tambosi demanded of his cast, but his annoying tics for Dr. Caius and Mistress Quickly’s repetitive wild arm gestures illustrating the title character’s magnificent girth were over the top. Falstaff may be a comedy, but it is still Verdi and not Rossini.

From the pit, conductor Daniele Callegari gave San Diego Opera a magnificent Don Giovanni in 2015, and his interpretation of Verdi’s superbly orchestrated Falstaff—with the masterful co-operation of the orchestra—proved even more eloquent and rewarding. If Chorus Master Bruce Stayna’s singers did not have a huge role in this opera, when they were on stage they sang with power and clarity. 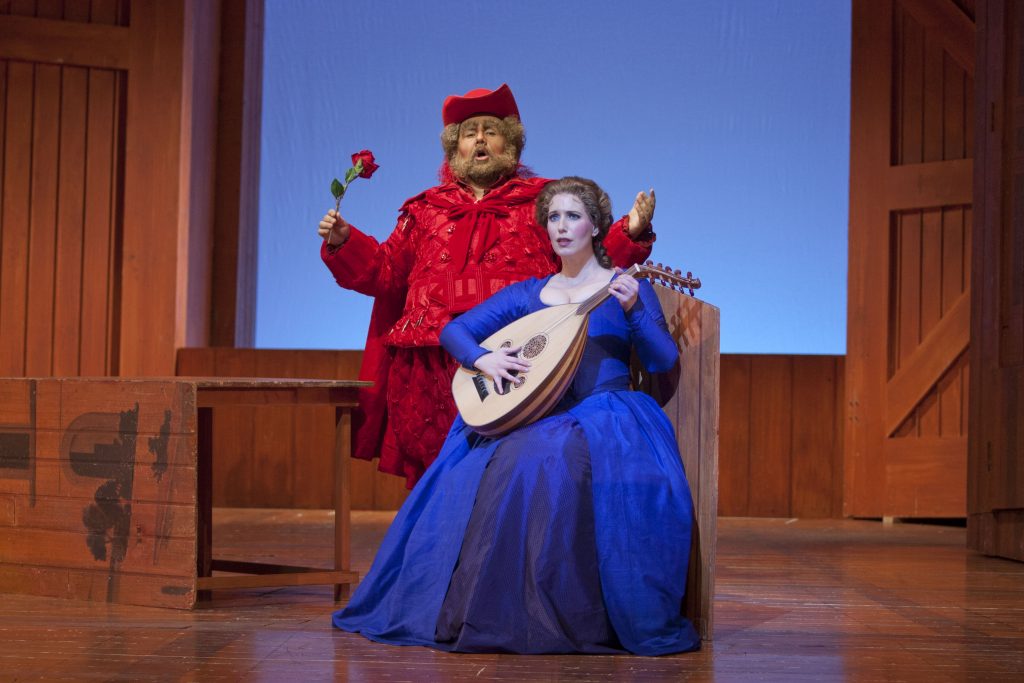 The brilliantly—no positively electric—hued costumes by Frank Philipp Schlössman threatened at every moment to overwhelm the set and the singers, but Verdi’s opera eked out a close but decisive victory.

[themify_box style=”shadow” ]San Diego Opera’s production of Verdi’s Falstaff opened at the Civic Theatre on February 18, 2017, and will be repeated in that venue on February 21, 24, and 26.[/themify_box]