Mozart’s original title for Così fan tutte was La Scuola degli Amante—The School for Lovers—and San Diego Opera’s exuberant new production of Mozart’s final comic opera remains true to this primal concept. In this Così fan tutte, which opened Saturday at San Diego Civic Theatre, Director Timothy Nelson has relentlessly focused on the emotional cauldron that Mozart’s four lovers create as they learn painful lessons about themselves and unlearn their perceptions of the objects of their affection. 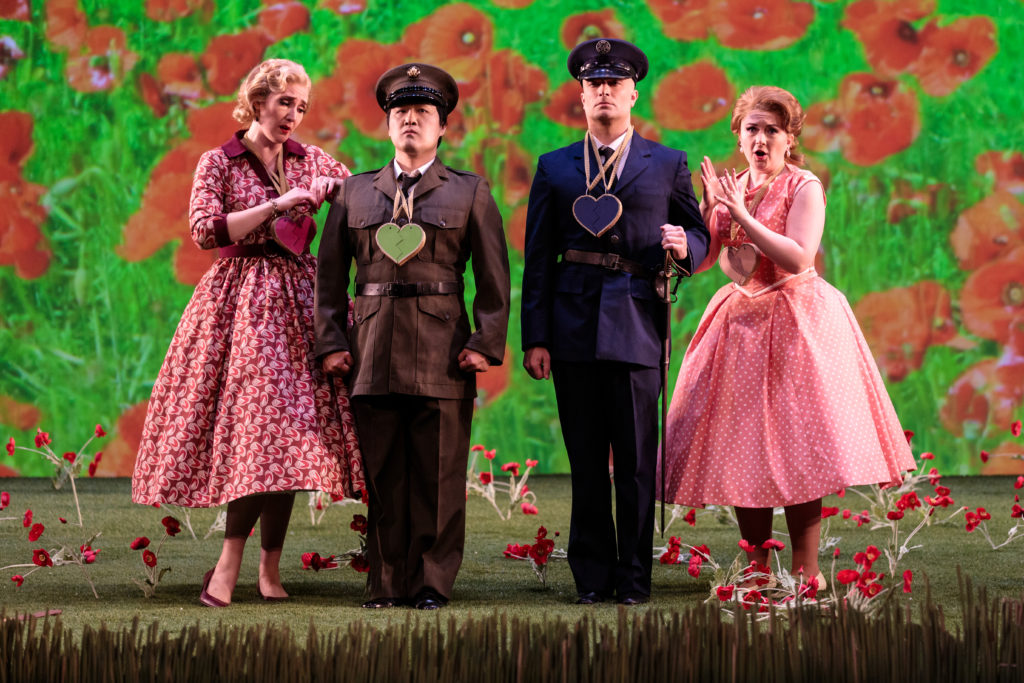 Nelson has updated the story from 18th-century Italy to vaguely contemporary America. From the style of the women’s long, bouffant skirts, one might infer the era of the 1950s, although wearing retro styles today can be a sign of sophisticated fashion.

Instead of the placing opening scene among the three men in a coffee house as the librettist Lorenzo da Ponte intended, Nelson has his dudes conversing and scheming in the locker room of a men’s only gym. This turns out to be an important choice, because throughout the opera, Nelson has his singers continually changing costumes onstage and spending much of the opera taking off dresses and suits to sing in their elaborate undergarments. 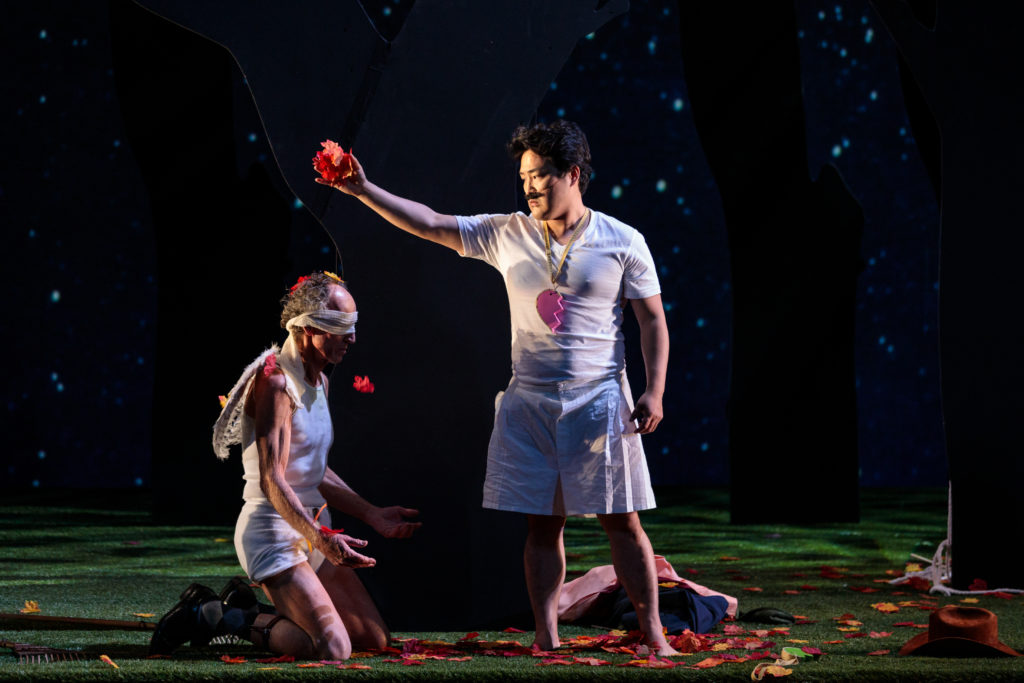 Da Ponte’s rickety plot for Così has always depended on the premise that the women will not recognize their actual male lovers disguised as Albanian soldiers attempting to woo them away from their intended partners. Costume Designer Ingrid Helton has soldiers Ferrando and Guglielmo disguised as outlandish cowboys, but Nelson’s point is neither the credibility of disguise nor the gullibility of women, but rather the larger psychological question of who is the real person underneath their attire, facades, and impersonations? 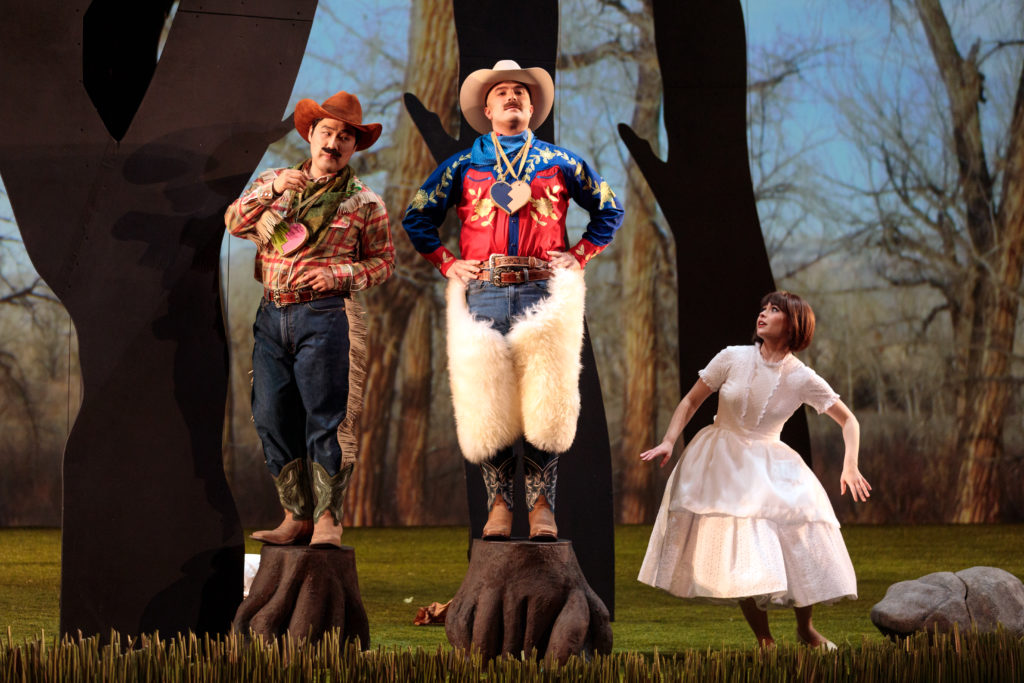 Since there is never a surplus of first-rate Mozart tenors, it was a delight to encounter Konu Kim as Ferrando in his San Diego Opera debut. His resplendent, supple tenor proved as agile as his spirited stage presence. As Guglielmo, John Brancy’s sterling baritone proved an excellent complement to Kim. If at first Reginald Smith Jr.’s more hefty baritone did not strike me as optimally Mozartean, he tempered his vocal approach to give his Don Alfonso an undeniable hint of malice without turning him into a mustache-twirling villain. The opening trio by these men, “La Mia Dorabella” set a high standard of gleaming ensemble virtuosity, which the entire cast sustained throughout the opera.

The two returning sopranos to San Diego Opera easily fulfilled the promise of their debut roles here in the spring of 2019. Sarah Tucker, a vocally glorious Micaēla in the company’s well-received Carmen, gave Fiordiligi a passionate drive that illuminated her character, notably in her famous aria of fidelity “Come scoglio.” As the ill-fated Gilda in Verdi’s Rigoletto, Alisa Jordheim’s vulnerability proved her successful dramatic calling card, but she had no difficulty finding the pluck and bravado to endear her scheming Despina to Saturday’s Civic Theatre audience.

Newcomer Samantha Hankey’s bright, expressive mezzo-soprano comfortably balanced Tucker’s soaring soprano, which we experienced early in the opera in their blissful duet “Soave sia il vento” that sent their actual lovers off to accomplish their military duties. Nelson added to the drama the mute character of Cupid–he proved an omnipresent object of derision–but instead of the chubby infant version we know from cartoons, this cupid was a gaunt senior citizen, played with patient endurance by Jack Missett.

Although the San Diego Opera Chorus accomplished all of its work offstage, these well-trained voices ably augmented the vocal texture when needed. Under Stasyna’s confident direction, the San Diego Symphony gave a polished and vibrant account of Mozart’s rich score—especially those luxuriant wind obbligatos the composer lavished on his arias.

Tim Wallace’s brilliant—almost lurid—red and green bucolic set for the second scene of Act One actually heightened the scene’s emotional impact, and the silhouettes of tree trunks descending and ascending in Scene Two reinforced that scene’s searing emotional conflicts. Ingrid Helton’s over-the-top costumes helped remind the audience that the opera remains a comedy, in spite of the cavalcade of potentially destructive actions that befall the two young couples.

I will not spoil the surprise for audiences who are able to make the remaining three performances of this excellent production, but a clever—however not at all intrusive—video component of the set reminds loyal San Diego Opera patrons of a successful aspect they encountered in the company’s two drive-in operas during the lock-down stage of the current pandemic.

San Diego Opera’s new production of Mozart’s ‘Così fan tutte’ opened at the San Diego Civic Theatre on Saturday, February 12, and can be experienced on February 15 and 18—as well as a February 20 matinee—in the same venue.