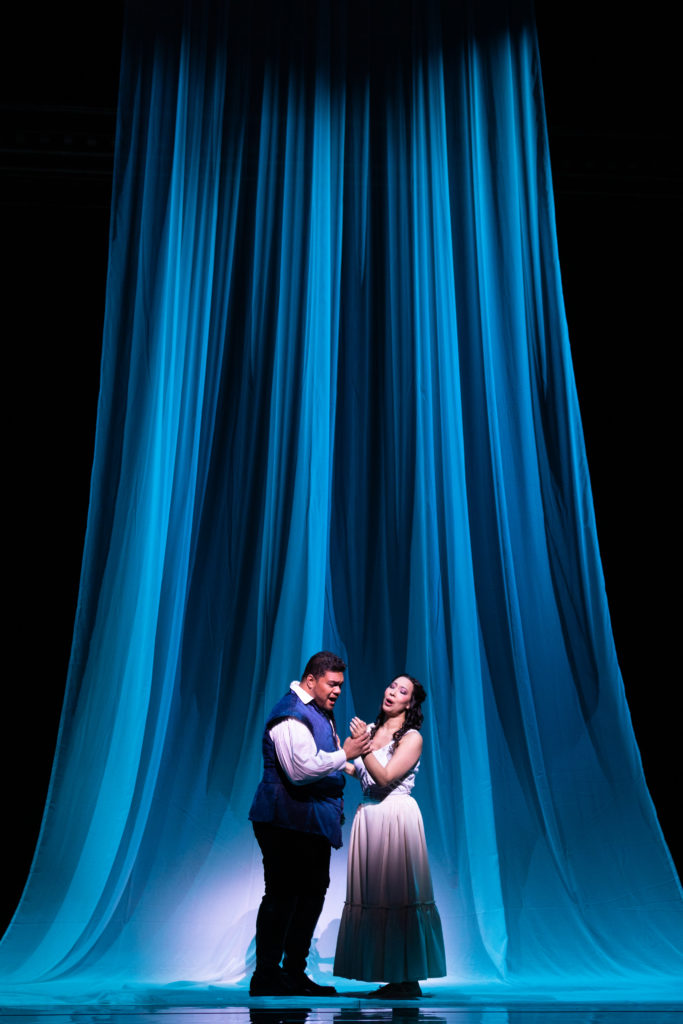 General Director David Bennett scored in every category: star quality young singers in the tenor and soprano title roles; a cadre of accomplished vocalists in the many secondary roles; a ravishing set and costumes in striking primary colors; nimble stage direction, and a savvy French Canadian conductor leading the San Diego Symphony in the pit. To borrow a phrase from popular culture: it rocked!

Opera aficionados came to hear Samoan tenor Pene Pati, the next—or current—tenor superstar as Roméo, and they were not disappointed. His radiant voice grows even more impressive as he ascends to the tenor stratosphere, where he settles in with uncanny ease, especially when soaring over the full chorus and orchestra. His gave the famous second act aria “Ah, lêve-toi soleil” a luxurious, incandescent quality that made me think, “Why would I want to hear this aria sung any other way?” In his wedding night duet with Juliette, “Nuit d’hymenée,” even his dulcet murmurs communicated searing passion.

Soprano and California native Nicole Cabell, a captivating Juliette, proved her mettle in her opening aria, “Je veux vivre,” owning that show-stopper with dazzling coloratura finesse. Like Violetta’s “Sempre libera” in Verdi’s La traviata, this aria vividly describes a young woman’s desire to enjoy her life unencumbered by the duties of marriage until, of course, she meets Roméo, and then all of that resolve flies out the window. Like Pati, dramatic urgency propelled her singing at every turn, although the perfectionist in me wishes she had the gleam and prowess in her uppermost register that Pati displayed in spades. Nevertheless, they made a spectacular pair of impetuous young lovers, and—in spite of all the puffy pageantry Gounod has stuffed into his very grand grand opera—the work is really all about them. 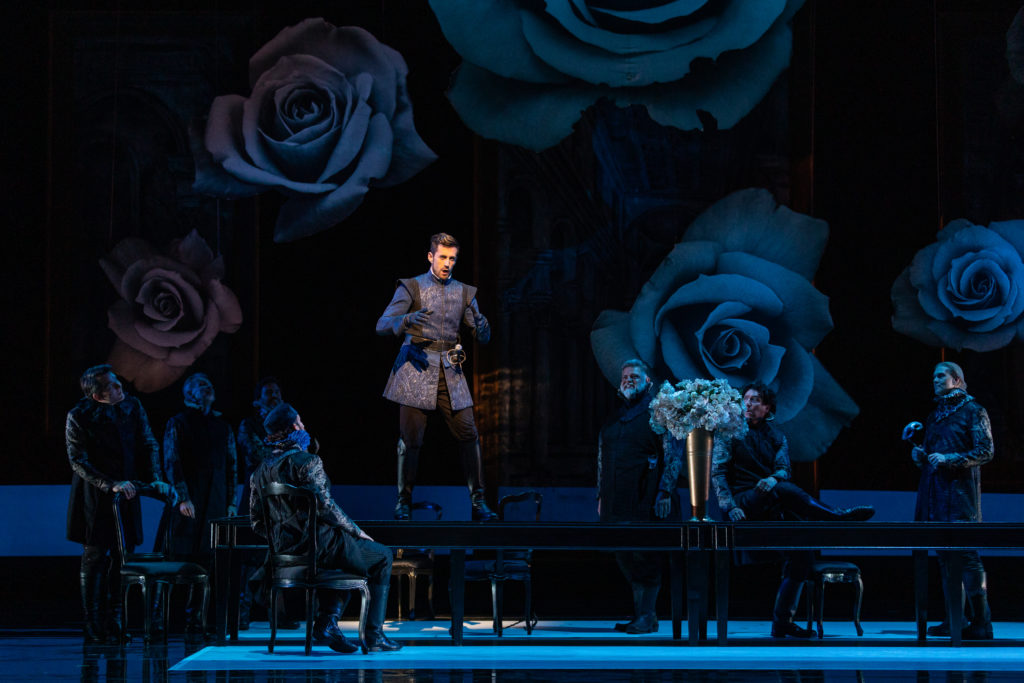 As Roméo’s closest friend Mercutio, the hearty baritone Hadleigh Adams gave a commanding account of his bravura Queen Mab aria, “Mab, reine des mensonges,” boldly striding back and forth on a long banquet table center stage as he tossed off those spicy couplets from librettists Barbier and Carée. And as Roméo’s trusted page Stéphano, mezzo-soprano Sarah Coit mesmerized the audience with her charming Act 3 aria “Que fais-tu, blanche tourterelle?” It came as no surprise that tenor Adrian Kramer, who made a stellar Don José in San Diego Opera’s 2017 production of  Peter Brook’s The Tragedy of Carmen, became a fearsome, vocally assertive Tybalt, Roméo’s Capulet nemesis. We could sense his snarl even when he wasn’t singing. Robust bass Colin Ramsey gave Count Capulet the dignity and authoritative qualities that the leader of Juliet’s prominent Veronese family requires. 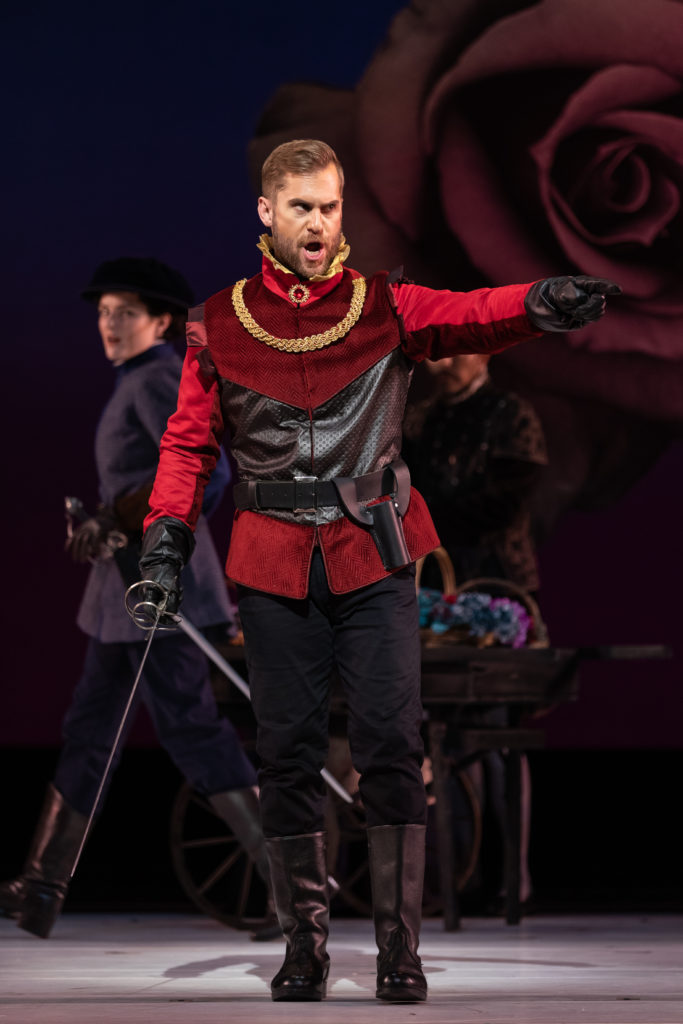 Although the role of Friar Laurent is pivotal to the plot–he not only secretly marries Roméo and Juliette, but he provides the young woman with the potion that will simulate death to avoid her father’s maneuvers to hastily marry her off to the simpering Count Pâris–Gounod took care to give this member of the clergy an unmistakably sympathetic characterization. Simon Lim’s resonant bass as well as his adroit phrasing imbued his Act 3 cavatina “Berceau de tous les êtres” with evident compassion. As Juliette’s nurse Gertrude, mezzo-soprano Alexandra Rodrick could not have been more solicitous of her charge, and in the role of the Duke of Verona, bass-baritone Ted Pickell oozed patrician authority.

Director Matthew Ozawa’s adroit pacing kept the opera’s dramatic pulse vibrant, giving the three-hour grand opera the breathless pace of a typical verismo melodrama. Both his bustling party scenes and the lethal fight scenes proved tightly organized, and the fight episodes, coached by Doug Scholz-Carlson, revealed unexpectedly supple and credible swordsmanship. San Diego Opera Chorus under the direction of Bruce Stasyna provided rousing ensemble support, especially in the opera-opening masked ball and in the third-act finale in which the Duke exiles Roméo in front of rabid partisans from both families. Yves Abel, the company’s Principal Conductor, drew a burnished yet exciting sonority from the orchestra, stylistically true to the composer’s Gallic ideal, notably a strong but quite mellow brass section. Abel’s sympathetic support of the vocalists also contributed to the production’s secure dramatic focus.

The design of William Bowles’ late Renaissance set and Sarah Bahr’s flamboyant period costumes firmly evoked the period of Shakespeare’s play, and color sagely divided the feuding families. Roméo and his Montague kinsmen wore shades of deep blue—what some call French blue–and blue lighting, the design of Paul Whitaker, flooded the stage when the Montagues dominated the scene. Deep red and scarlet defined the Capulets’ vesture and stage lighting, although in the lovers’ romantic scenes together, Juliette wore virginal white. Above the set’s realistic scenery, projections of giant roses in full bloom mingled with rows of upright swords, vivid symbols of romantic love and warfare between the Montagues and the Capulets, the overlapping themes of both the opera and the Shakespeare play.

With Roméo et Juliette, Gounod had risen to the apex of this opera-writing career, although in the contemporary international opera repertory, this opera remains overshadowed by his Faust. This remarkable San Diego Opera production makes a serious case for evaluating Roméo et Juliette as the equal rather than less attractive step sister to the ubiquitous Faust.