In recent seasons, San Diego Opera’s dētour Series has boldly expanded the parameters of both the subject matter and the shape of opera. In the fall of 2017, for example, dētour offered Laura Kaminsky’s As One, a chamber opera that charted the growing self-awareness of a transgender woman, and in early 2018, dētour featured Ástor Piazzolla’s nuevo tango opera María de Buenos Aires. As the 2018 December holiday season approached, dētour presented the choral opera All Is Calm: the Christmas Truce of 1914 by Peter Rothstein. 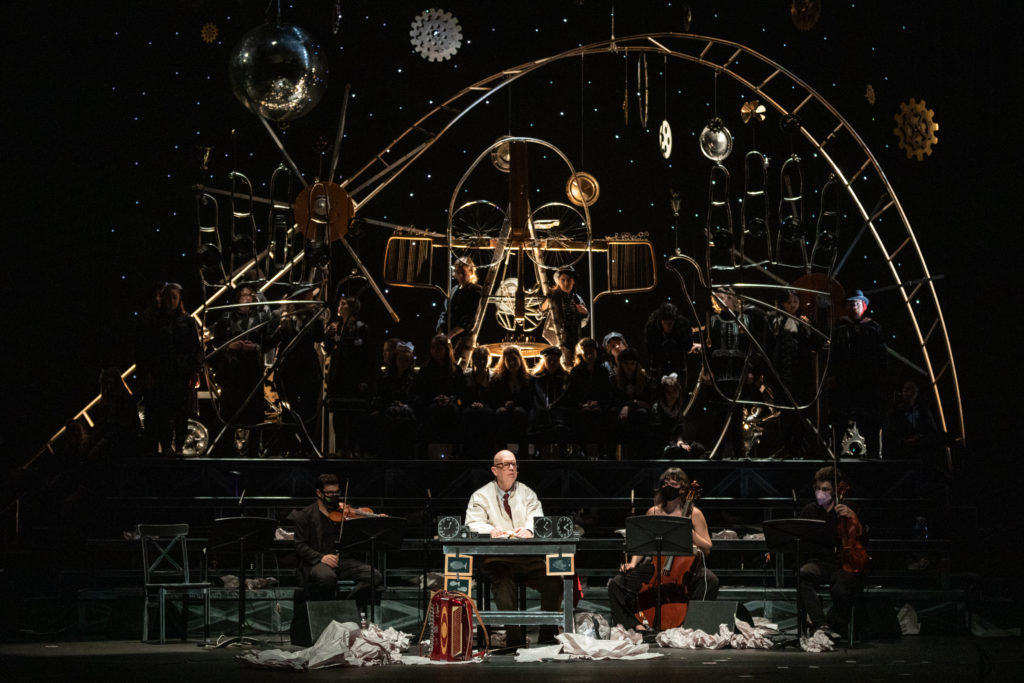 At the Balboa Theatre on May 13, the adventurous company opened Paola Prestini’s Aging Magician, an intriguing staged work that is as close to performance art as it is to chamber opera. In this splendid production by Beth Morrison Projects and VisionIntoArt, Rinde Eckert, who also wrote the work’s poetic libretto, portrays Harold, a clock-maker and sometime magician around whom the slender plot revolves. As in much performance art, Harold breaks that dramatic fourth wall and begins to speak to the audience right from the get-go. He also speaks to his offstage sister in various unexpected phone calls, and he obliquely interacts with the members of the onstage Brooklyn Youth Chorus, who act as the work’s omniscient narrator and Harold’s moralist.

That Harold is a clock-maker upholds one of the libretto’s primary philosophical questions: is time cyclical, turning in circles like the hands of a clock? Or, is time linear, like the delineated human span of birth to death?

Harold is a contemporary version of the medieval Jedermann embarking on his final journey—death. What Harold has to show for his life’s work is contained in his book, a ramshackle collection of all his magic tricks, which he desperately wishes to pass on to someone before he leaves the planet. Updating the lore of Greek mythology, Harold’s journey is not taken on a boat crossing the river Styx, but rather a ride on the New York subway’s F Train to Coney Island.

Essential to the drama of Aging Magician is the fantastical set designed by Julian Crouch and Amy Rubin: a massive, gilded Rube Goldbergian machine full of whirring mechanisms that somehow suggest the both complex interior of a pocket watch and the revolving planets and moons of our solar system. For most of the opera, Harold is seated center stage at his cluttered desk; immediately behind him sit the four string players of the Attacca Quartet, and behind them the young women of the Brooklyn Youth Chorus are grandly arrayed as they merge into the lower portion of the set.

Eckert capably sang the few almost arias Prestini has provided him, played the accordion, and rode his bicycle—which he crashed offstage—but his adroit acting created a captivating Harold, even though this bumbling Walter Mitty would rarely merit a second glance if you saw him on the street or in the subway. Prestini saved her plush vocal writing for the voices of the Brooklyn Youth Chorus, who sang with laudable power when required, but maintained their dulcet dramatic urgency throughout. Chorus director Dianne Berkun Menaker deftly conducted her charges from the side of the stage, and the disciplined ease of their response proved the wisdom of engaging this ensemble for Aging Magician, which they helped premiere in 2017.

Equally dramatic and often poignant in their expressive delivery, the Attacca Quartet accomplished for this chamber opera what a great pit orchestra does for Puccini. Their precise attacks heightened the surprise of unexpected dramatic turns, and their warm sonority cradled the audience’s emotional response to the work. 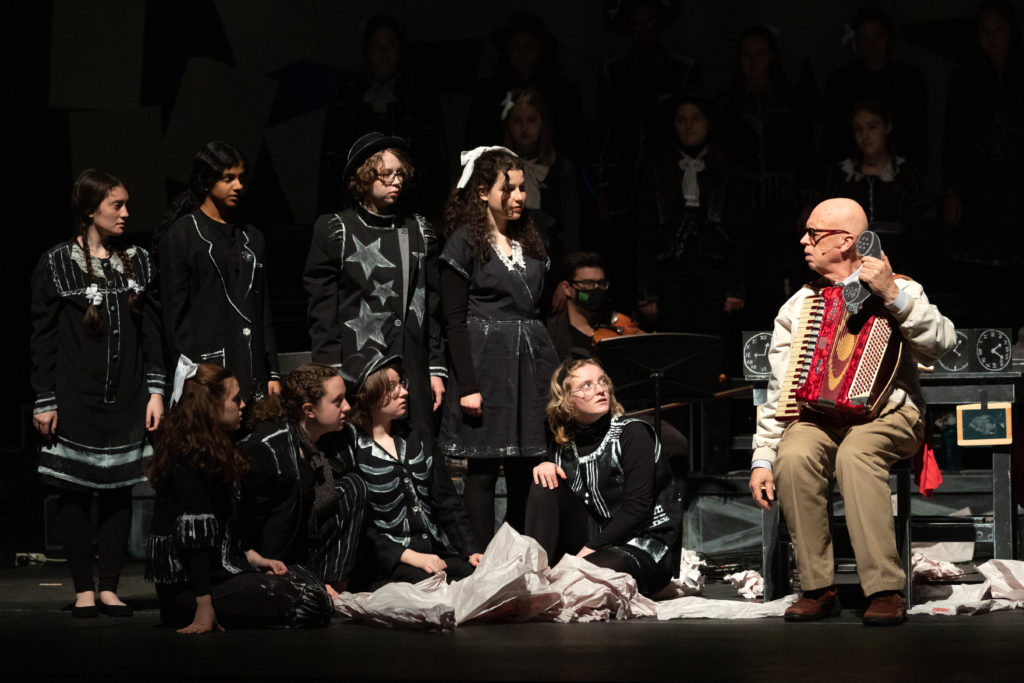 Julian Crouch’s animated direction of Eckert and the chorus not only kept the pace lively, but prevented the stage from appearing like a formal oratorio performance. Amy Rubin’s costumes for the choir gave each singer a touch of individuality, yet her fanciful black and silver costumes also clearly suggested their ensemble unity. And Joshua Higgason’s masterful lighting added greatly to the evening’s magic.

The San Diego Opera presented ‘Aging Magician’ at the Balboa Theatre in downtown San Diego on May 13 and 14, 2022. This review is based on the opening night May 13 performance.