Earlier this month, headlines and newscasts focused on world leaders gathered in Europe to mark the 100th anniversary of the Armistice that finally ended World War I. Although the strange behavior of a certain prominent president clouded the solemnity of those anniversary events, for a week a renewed awareness of the 20th Century’s first great war came under global scrutiny.

San Diego Opera’s upcoming production of the chamber opera All Is Calm: the Christmas Truce of 1914  sheds light on the impromptu Christmas Day truce of 1914, an event early in World War I that offered a glimpse of humanity in that otherwise merciless combat. Engineered by insubordinate service members on both sides, men climbed out of their trenches into the no-man’s land between the sides to play soccer, sing their traditional carols to each other, and even to exchange modest gifts.

In 2008, the Minnesota writer Peter Rothstein turned this unusual and long overlooked historical event into a radio musical drama, All Is Calm: The Christmas Truce of 1914. With musical arrangements provided by Erick Lichte and Timothy Takach, Theater Latté Da and the vocal ensemble Cantus, both Minneapolis-based organisations, gave Rothstein’s work its premiere that same year. In San Diego, Bodhi Tree Concerts has staged All Is Calm for the last two years during the Christmas season in the San Diego’s Veterans Museum located in Balboa Park. 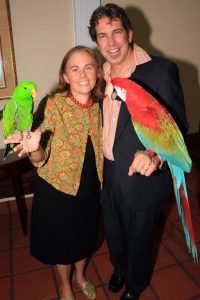 Detour Series for December of this year, General Director David Bennett enlisted the San Diego team that had already successfully produced Rothstein’s work. “Last year David, Walter [DuMelle] and I met to talk about a collaboration,” explained Diana DuMelle, co-founder with her husband Walter of Bodhi Tree Concerts. “Walter and I realized the advantages of playing to a much larger audience in the Balboa, but we wanted to make certain that our artists would be given a chance in a San Diego Opera production. We are happy to say that they all successfully auditioned for San Diego Opera, and the company added some additional singers for this larger production at the Balboa.”

In the Bodhi Tree Concerts’ production of All Is Calm, the men of the San Diego choral ensemble Sacra/Profana provided the chorus to perform both the carols and the period patriotic and popular songs that deepen the emotional impact of the work. “I am glad to return to All Is Calm,” said Sacra/Profana Artistic Director Juan Carlos Acosta, “because like any great work, I continue to find more to appreciate in the score every time. And in addition to the music, I think its lesson for me is still timely—that through music people have a way to put aside and move beyond their differences.”

Most of the action of the opera takes place on Christmas Day, and some 17 traditional carols—from the various nationalities involved in the war—intersperse the piece. But All Is Calm is not any kind of Christmas pageant.

“It’s a story about finding common humanity that happened at Christmas,” Diana DuMelle observed. “Although I think it is true that the time of the year does open people up,” Acosta added. “The soldiers on both sides though it would be a short war, and after several months of the incessant violence of battle, they were ready for a cessation.”

All Is Calm also portrays the patriotic build-up to the war, the ugly reality of the actual combat, and the soldiers’ desire for peace during a holy season each side celebrated as the birth of the one named The Prince of Peace. For Rothstein’s narration of All Is Calm, he relied exclusively on letters and diaries of soldiers from both sides of the conflict.

“When we were performing at the San Diego Veterans’ Museum, I talked with Captain Sheldon Margolis, a lifelong military man and the museum’s director,” Diana explained. “He told me, ‘The words of the soldiers are powerful because they actually lived the experience. Soldiers fight for duty and love of country, but they would rather not be killing.’ ”

“I have close friends who are retired military,” added Acosta. “They were not only moved by this work, but they are eager to see it again. Nobody wants peace more than soldiers.” Acosta did stop short of calling All Is Calm an anti-war piece. “I would say its theme is recognizing the humanity in your opponent.”

“Music is a common language we can all understand,” Diana DuMelle continued. “It is a great equalizer that brings people together—it certainly brought them out of their trenches!”

San Diego Opera’s joint production with Bodhi Tree Concerts and Sacra/Profana of Peter Rothstein’s choral opera “All Is Calm: The Christmas Truce of 1914” will take place December 7, 8, and 9, 2018 at the Balboa Theatre in downtown San Diego adjacent to Horton Plaza. Juan Carlos Acosta conducts the performances and Alan E. Hicks, the new Director of Opera Theatre, a jointly held position between San Diego State University and San Diego Opera, will make his company directing debut with these performances.