San Diego Repertory Theatre may have cleaned up the Lyceum’s flood, but there are still signs of work in progress on its physical facility. Even so, the Rep welcomes back its patrons with a dandy show, which is making one of three stops on The National New Play Network’s Rolling World Premiere. 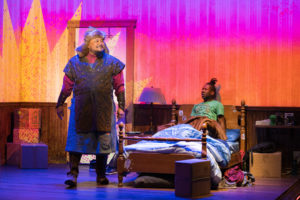 Michael Gene Sullivan’s The Great Khan is about outcasts and how they cope. Sixteen-year-old Jayden (Jerome Beck) has recently moved because he rescued a classmate named Ant (Mikayla LaShae Bartholomew) from assault. Ant has moved as well, and she comes to visit Jayden by climbing through his bedroom window. Jayden talks about his father and claims to be in contact with him, but, truth be told, he hasn’t seen his father in some time. Crystal (Brittney M. Caldwell), his mother, tries hard to parent Jayden, but they both find it tough that she’s a single Mom.

Jayden also has changed schools in the middle of the term, and Mr. Adams (Dylan Seaton), his new history teacher, has already started an assignment looking at leaders in world history. The only leader left for Jayden is Genghis Khan. 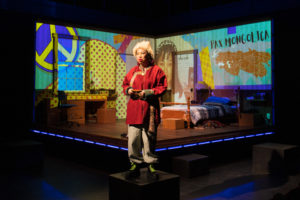 Fortunately, the assignment is for two-student teams to undertake, and Jayden’s teammate is named Gao Ming (Molly Adea), a go-getter if there ever was one. Given that they need to move right along, it’s truly amazing that Jayden manages to conjure a visit from Temujin (Brian Rivera), the Khan himself.

With Temujin’s help, Jayden and Gao Ming manage to put together a bang-up project. In the process, Jayden learns about how the Khan managed as an outcast and how Jayden wants to manage his status differently.

Director Jess McLeod has put together a solid production in the Rep’s smaller house, the Lyceum Space. She’s aided in particular by stellar sound design by Tosin Olufolabi, which cranks up the reverb on Khan’s voice, and projection design by Blake McCarty, with consultation from Caroline Yao. Yi-Chien Lee’s scenic design rests on a wooden platform but allows individual characters to present monologues by standing on black boxes between the platform and the audience seating. This mobility is facilitated by Rebecca Jeffords’ lighting design. Faith James’ costumes range from street clothes to sleeping clothes and a warrior get-up for Khan.

As Jayden, Jerome Back has the adolescent moves – and the adolescent anxiety – down cold. Brian Rivera makes Temujin, the Khan, both warlike and sympathetic. Molly Adea has an adolescent’s cleverness about getting around problems, Mikayla LaShae Bartholomew climbs in and out of windows with ease, and Brittney M. Caldwell finds a good mix of tough and tender parenting.

Each production in the Rolling World Premiere is supposed to be a learning experience for the playwright, so that he can make revisions between productions. For Michael Gene Sullivan, I suspect that the learning from San Diego Rep’s production of The Great Khan will take the form of understanding how the various acting and production elements combine to produce a high quality and satisfying result.

Performs through February 27, Fridays and Saturdays at 8pm, Sundays at 7pm, Matinees Saturdays and Sundays at 2pm. There are some performances on other days and times, see the calendar at https://www.sdrep.org/calendar.php for details. Pay parking is available in an underground lot across from the theatre entrance. Street parking may be available, but read signs carefully for restrictions.