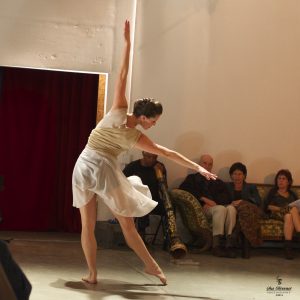 The series “San Diego Dances” started with winking and whimsical warnings as dancers hit the concrete basement floor of 3rd Space, a funky hidden away working club on Park Blvd. that offered multiple levels and views. In the realm  of old health class films, a voice warned viewers to turn off cell phones and “leave photography to the pros.”  Of course, that didn’t stop a few renegades in the crowd who couldn’t help but snap photos throughout the eclectic and swift-moving program of 12 dances.

Presented by Peter Kalivas, the series has been appearing in unexpected spaces since 2009. For the 8th installation on view last weekend,  Kalivas’ PGK Dance Project shared the multi-level space with the tap dancing group California Rhythm Project, and two guest choreographers.

In 3 Different Ways by Kalivas, young dancers in bright melon colored stripes moved to a bubbly score of deep cello and challenging rhythms.  In sharp contrast, his solo for the riveting Viviana Alcazar turned dark and mysterious.

In Bitterness Lingers Unnecessarily, Alcazar moved fluidly over the concrete floor but became unhinged. Her eyes flashed and she struggled to contain angry rage.  Sounds of deep guitar and voice (similar to Joan Armatrading’s) fueled her pain. A lasting image had the breathless Alcazar wag a finger at an invisible foe and prepare for a confrontation that seemed all too real. That happens when you lose the stage. Viewers were seated just inches away from her, which is part of the allure of the series.

The group piece Distant Memory, choreographed by Alcazar, tapped into pleasant memories of summer and childhood, when little girls wanted to dress the same.  Strong sequences contrasted three versus one and varying speeds accented by stabbing feet.

Kalivas took full advantage of the space in staging the duet Trappings – Study 1 of 4.  Dancers Jennifer Fait and David Wornovitzky sizzled in presses against the wall. It began with his simple press of her heel, but they liked it rough and there interactions became combative.

Choreographed by Kalivas and set to music by Amanuel Zarzowski, the final piece of the night left the audience feeling energized and wide-eyed. The affecting live music, including didgeridoo, two violins, cello, and clarinet, added greatly to the premiere of Wood Breaks, a spooky and gutteral dance for four that rattled the rafters, and our nerves when dancers balanced precariously on a rather steep staircase.  When dancers paused there, they seemed spellbound, possessed.

Guest choreographer Natasha Ridley’s Searching for Light 3 offered a Zen experience that wasn’t too literal. Sequences with rises from the floor hinted at Graham floor exercises, though moments with smooth hands gliding over skin were quite lovely.   Who knows why she presented part 3 first, and her solo, part 1 later, but her solo was especially engaging. Ridley is a petite woman known for a strong internal focus, and her ballet body has become more expressive.  Accented by a tingling string score, all eyes were on her as she seemed to float down the aisles. 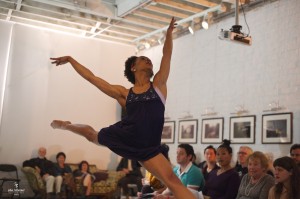 Hoofers from the California Rhythm Project offered a buffet of tap styles and excelled in dances a-capella.

The dance in the first half was a muddy mess, a disappointment because additional music overwhelmed some fancy footwork. The tapping was already muffled by their portable wooden risers.  Still, the culprit was the sound cranked up too high, and acoustics in 3rd Space are dreadful (think concrete floor, wooden rafters, plywood, metal railings, no draperies, no carpet).  Under softer circumstances, we might have appreciated the soft shoe portion where a woman slowly swirled her feet in a small box of sand.

What a positive switch in the second half though. Three dancers created their own snappy score by mixing heel rolls and claps in Crosswalk. Four dancers grooved to Latin rhythms in Chan Chan, a Flamenco flavored dance pairing sliding guitar and sliding toes.

The California Rhythm Project (founded by Pam Thompson Spinner and now run by Nancy Boskin-Mullin) shined brightest in D3, a syncopated piece of candy without any intrusive music, just complex bucks, drags, and articulated riffs, all wrapped up with expressive arms and focus.  Sweet.