After Sacra/Profana gave its light-hearted concert devoted to the music of Carole King last month, I had some concern that this choral ensemble might retool its repertoire in favor of an audience friendly, easy-listening format. After hearing the group’s Founding Artistic Director Krishan Oberoi lead the singers in Ernst Krenek’s atonal “Lamentatio Jeremiae Prophetae” and Associate Artistic Director Juan Carlos Acosta conduct Benjamin Britten’s late and decidedly astringent Sacred and Profane: Eight Medieval Lyrics Friday at the Mingei International Museum, it was clear that my apprehension could not have been further from the truth. 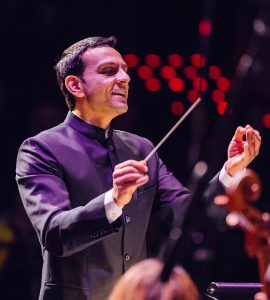 In 1938, Krenek escaped his Austrian homeland, where his once appreciated theater and 12-tone instrumental music was banned under the Nazi occupation. He settled into university teaching in the United States and in 1941 composed a large choral work based on the Latin text from the biblical lamentations of Jeremiah, Lamentatio Jeremiae Prophetae.

In this multimovement work, Krenek followed the Renaissance tradition of beginning each verse with a musical setting of a letter of the Hebrew alphabet. Muscially, Krenek’s Lamentatio is an amalgam of Schoenberg’s 12-tone compositional technique, to which Krenek had become attached after the success of his jazz-inflected opera Jonny spielt auf, and the architecture of Renaissance choral polyphony. To the listener, his choral music sounds both familiar in its structural composition and yet foreign in its unpredictably angular lines and atonal harmonic language.

Lamentatio is, however, a moving and profound work, worthy of wider performance, although no community choir would have sufficient time or technique to do it justice. To Krenek’s work Sacra/Profana brought well-balanced sections, a smooth, finely-tuned—if somewhat covered—sonority, and consistently supple phrasing. Oberoi’s confident, clear and insightful directing focused each movement and effectively tightened elusive monodic sections.

To soften Krenek’s harmonic edge, Oberoi substituted two short sections in the middle of Lamentatio with music of Tomás Luis de Victoria on the same texts. I could see the faces of the Sacra/Profana choristers relax and even begin to smile as they launched into Victoria’s lush (by compoarison to Krenek) idiom, where every momentary dissonance resolved with delicate predictable sweetness.

I suppose I could compare this Renaissance interlude in Lamentatio to a serving of sorbet between courses of a rich French dinner. It certainly worked and, for me, the return to Krenek’s final five sections proved more rewarding after the Victoria.

Britten finished his eight-movement Sacred and Profane in 1974, the year before his death. Although

the texts of these poems, written in a very early English tongue that looks more like German and sounds only vaguely like contemporary spoken English, vary from pious Christian hymn to poems about nature and the seasons, Britten’s idiom is unchanging. Evident is his spare, meticulous text setting and melodic style that uncannily embodies the scansion of his text. Britten’s use of extensive unresolved dissonance struck me as atypical for a composer who was considered hopelessly out of date in the 1970s, but it certainly added edge and excitement to his choral verses. Every once in a while, he chose a surprisingly sweet tonal final cadence that dropped in like an unexpected visit from a shirttail relative.

Acosta conducted this Britten work with his customary calm exactitude, and the singers responded with comparable precision and a modest degree of warmth.