Mahshid Fashandi Hager, author of No Way Back, now receiving its world premiere courtesy of the Roustabouts Theatre Company, admits that her story of escape from the Iran of the 1970s is a familiar one. It is also a story of trauma, in which Ms. Hager specializes as a therapist. As a familiar yet harrowing story, it is difficult to watch, even from the sense of distance that the medium of video streaming can – and does – bring. Despite the difficulty, it may still be essential viewing.

Ms. Hagar’s script recalls her travel at the age of ten as her family left Tehran with the vision of reaching a relative in Germany and eventually traveling to the United States. The program describes the time as 1976 – 1981, though the 105-minute stream plays as though the trip was continuous, lasting, perhaps a month. Along the way, the family encountered obstacles created by a variety of authorities, Iranian, Kurdish, Turkish, as well as bandits, all of whom potentially could keep them from progressing further. Each family member was able to bring minimal luggage on the trip, and weather conditions varied depending on the terrain, a fair amount of which was mountainous. The family also found a small number of allies, often when most needed.

Given that the play ends at the Munich Airport, and given that the author, many years later, lives in San Diego, it is no surprise that the journey was at least to some degree a success. But, there’s no “afterward,” only one last set of authorities to get past before the play ends. One family member did go back to Tehran, but the fate of that individual was not revealed.

So, the focus is on the trauma of being a refugee, though the family did not start out thinking about themselves as refugees. And, trauma is always difficult to watch. At least it is for me. 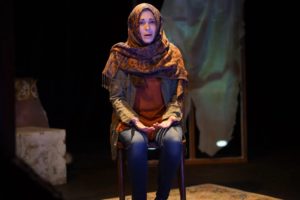 What makes No Way Back watchable is Jessica John’s performance. Ms. John has a rare quality of exceptional “presence” as an actor. She is consistently in the moment, and you never see her “actor” brain working. That’s an admirable quality and one that suits this story quite well. Fran Gercke’s direction makes certain that this quality shines through.

The play’s ten-year-old girl is also always in the moment. She sees what the adults around her are doing. She’s aware of their goals and to some degree the amount of agency they have in carrying out those goals. But, she herself doesn’t have many means to affect the story of the journey. Her talent is to observe and describe what she’s seeing in vivid, if simple, language.

The psychological space of the journey is confined, and the production feels confined, too. Tony Cucuzzella’s scenic design shoots as though it takes up very little room, and Joel Britt’s lighting design takes what space there is and makes it even smaller. Matt Lescault-Wood’s sound keeps the nuances of Ms. John’s performance in focus. Michael Brueggemeyer’s video photography and editing holds audience interest and shows that the trip was, at times, interrupted and then resumed. Ms. John designed her own costumes, with assistance from Ross Stewart.

To the company’s credit, it intends to offer several talkbacks with not only the author but experts on immigration and the refugee experience. This highlighting of the social justice aspect of the story heightens its importance for contemporary audiences.

A traumatic trip ends at its intended destination. How happily it ends is evident many years later but not at play’s end. Ms. John’s stellar acting, as well as understanding the refugee experience,  makes the trauma worth experiencing.

Streams on demand through December 13, 2020, at https://www.theroustabouts.org.