In a post-performance talk on Wednesday, choreographer Ronald K. Brown spoke about wanting to be worthy of the ancestors. In fact, the name of his New York-based company, Ronald K. Brown/EVIDENCE, reflects his belief that “When a person steps into the world he represents his families, teachers and ancestors and must move forward with a sense of accountability and responsibility. To be evidence.” 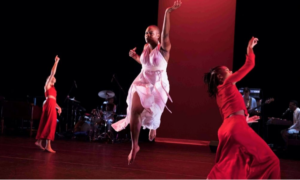 One sensed generations of ancestors—African and African-American—joyously hovering when UCSD ArtPower presented Ronald K. Brown/Evidence at the Balboa Theatre. (And I have faith the ancestors are supporting him as he recovers from a stroke he suffered last April, something he revealed publicly in an interview in the New York Times published on Thursday.)

The evening opened with “Upside Down” (1998), an excerpt from the evening-length “Destiny” that Brown co-created with Rokiya Kone and her Ivory Coast troupe, Jeune Ballet d’Afrique Noire. According to the program notes, the piece reflects community mourning, and there are moments when one dancer, lying supine, is carried by the group as if in a funeral procession. However, most of “Upside Down” is a high-energy celebration.

To the exuberant sounds of Fela Kuti, the ten dancers (five men and five women) explode into the West African-flavored moves that are a Brown signature—heart-opening flung-back arms, swiveling thighs, agile changes of direction, go-for-broke leaping turns. Fluid groupings take them into skipping circle dances, occasional solos, moments when they face us.

The men wear simple loose pants and are bare-chested. The women get all the color—vibrant orange, purple. It’s impossible to take my eyes away from red-clad Joyce Edwards, a big, powerful dancer who moves with queenly grace. (Omotayo Wunmi Olaiya did the costumes for all the dances.)

Edwards is a central figure in “The Equality of Night and Day: First Glimpse,” often the one person moving with energy, doing urgent reaches and turns, as she’s flanked by the rest of the group, doing slow unison. 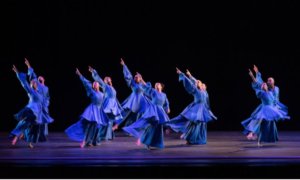 A work in progress, “The Equality of Night and Day” weaves excerpts from speeches by Angela Davis with original piano music by Jason Moran. Moran’s music is gorgeous, initially contemplative but becoming more and more urgent. The Davis excerpts offer painful truths about the state of our democracy and the racial injustice of the prison system, and Brown’s choreography responds with a fitting gravity.

Slowly walking, the group circles one or two more active dancers; one woman reaches out her hand, but no one takes it. All wear uniform blue pants and bulky skirted jackets—I thought of the dancers as monks, both for the costumes and because their movement feels held-in, restrained. After what feels like a long time, the music and movement quicken. One man removes his jacket and kneels, hands in prayer, then goes into fluid dips and spins. At the end, they all shed the jackets (the women wearing bra tops, the men bare-chested) and one at a time, as if in a ceremony, carefully place them in a pile.

In the moment of watching this dance, I found it frustratingly static. But as it marinates, it seems to me Brown is doing something remarkable—creating a metaphor for being imprisoned that I experienced viscerally. When the restrained movements gave way to swooping turns and everyone shed the bulky jackets, I felt the relief in my body.

Brown initially made the transcendent “Grace,” the closing piece here, for the Alvin Ailey American Dance Theatre in 1999. A tribute to Ailey, “Grace” has become a Brown classic in the way that “Revelations” is classic Ailey.

The piece tells the story of a goddess who comes to earth to spread grace among humans. She arrives and later welcomes people to heaven to two different recordings of the same tune: Duke Ellington’s “Come Sunday,” which feels very much in the lineage of “Revelations” with its plea, “God of love, please look down and see my people through.” But while “Revelations” used all African-American spirituals, Brown also includes Roy Davis, Jr.’s house music and Nigerian artist Fela Kuti.

The cascade of movement is a delight. There’s a knock-kneed swivel, lithe arabesques a turn where the dancer stoops to touch the floor then bounces back up. And Brown mixes things up, throwing in West African-style arm flings and frantic moves to lyrical music.

“Grace” is sometimes performed with live musicians, and the stage felt a bit empty without them. Still, the more open stage focused attention on the lighting (designed for the original Ailey production by William H. Grant). Two dark curtains at the rear frame a central portal that’s initially lit in red and later, as everyone enters heaven, is bathed in ethereal blue.