In an amazing solo recital Thursday at the Balboa Theatre, Pierre-Laurent Aimard gave his account of revolutionary piano music from the last two centuries, anchored in Beethoven’s landmark Hammerklavier Piano Sonata, Op. 106, from 1818. 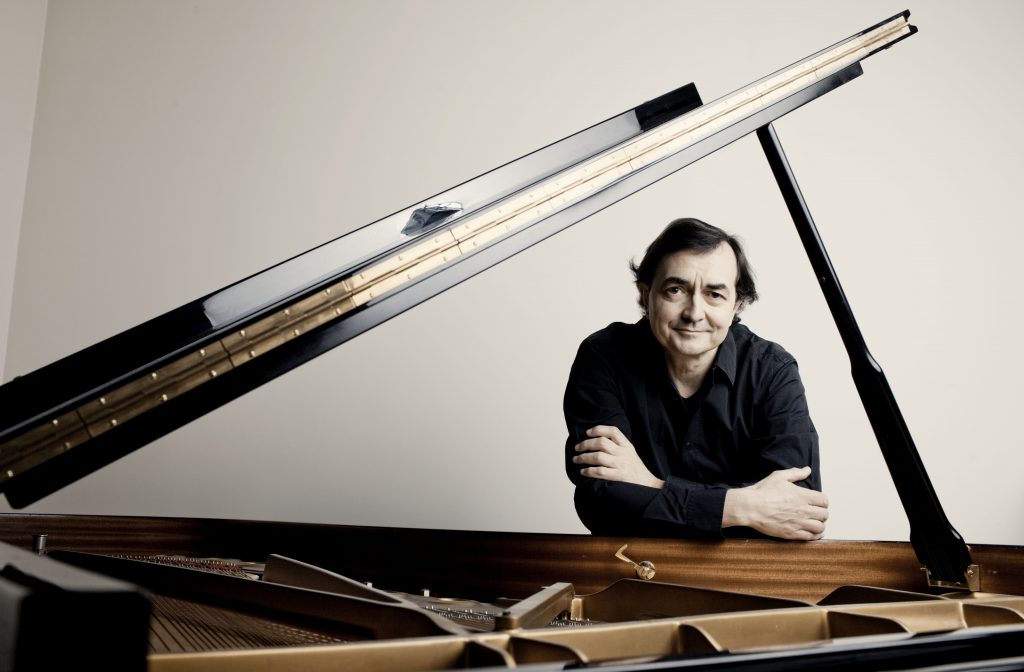 Aimard spent the first half of his recital presenting a collage of avant-garde selections from late Franz Liszt to Scriabin and Messaien, including the little known Russian mystic Nikolay Obukhov. Played without interruption, these six pieces filled the audience with surprise, questioning, and perhaps even discomfort, reactions that Beethoven’s audiences no doubt experienced hearing his startling—for its time—Hammerklavier.

Although Obukhov’s three short pieces, “Création de l’or” Nos. 1 and 2, and “Revelation” are 100 years old, their quavering soundscapes of delicate, often brittle fragmented themes and complex repeated chords struck my ear as uncannily contemporary. In Obukhov’s pieces, he scrupulously avoided melodic contours with instantly recognizable continuity, a trait still evident in Alexander Scriabin’s Piano Sonata No. 5, Op. 53, from 1907. Scriabin’s nervous but exciting reversals of tempo and dynamics within his single movement Sonata suggested the Expressionist angst that Arnold Schoenberg so famously captured in his Pierrot Lunaire of 1912. And speaking of Schoenberg, it should be noted that Obuhkov independently discovered his own system of 12-tone composition, although after leaving Russian because of the 1917 Revolution and settling in Paris, he failed to pursue his 12-tone technique with any of Schoenberg’s religious determination.

In the wake of Obukhov’s radical offerings, Liszt’s obscure “Nuages gris” from 1881 and even his frequently performed “Les jeux d’eau à la Villa d’Este” melded into this edgy sonic realm with surprising ease, and Aimard’s fluent, crystalline technique released Liszt’s cascade of notes into the theater like billows of incense in a cathedral procession.

Even more impressive was Aimard’s bracing account of Olivier Messiaen’s “Le courlis cendré,” the final movement of the composer’s magnificently complex Catalogue d’oiseaux (1956-58). Filled with dense clusters and rapid jumps to unexpected reaches of the piano keyboard, the piece not only repeats the desolate call of the Eurasian Curlew (the “courlis cendré”), but the composer has conjured the bird’s rocky, windswept habitat on an island off the coast of Brittany. That Aimard exhibited great affinity this Messiaen work is not surprising, since one of his main teachers was Yvonne Loriod, the composer’s second wife, for whom he wrote Catalogue d’oiseaux.

Had Aimard given a conventional blustery account of Beethoven’s Hammerklavier Sonata, his clever programming on the first half would have been pointless. Fortunately, his lithe, animated Hammerklavier proved revelatory at every turn. His touch made all the difference: sharp, brilliant attacks followed with quick, elegant releases that propelled his acute sense of abandon in the opening two movments, while his more sonorous legato and pensive rubato gave a mystical edge to the long Adagio sontenuto. And the exuberance of his final movement managed to suggest a wild dramatic urgency that answered the challenges and riddles of the opening movement.

As an encore, Aimard winked at this tired convention with an exceedingly quiet meditation by György Kurtág, “Lenovai In Memoriam / Waiting for Susan / Eine Blube for Nurva,” that contained more rests than notes.

This recital was presented by the La Jolla Music Society at the Balboa Theatre in downtown San Diego on Thursday, March 1, 2018.