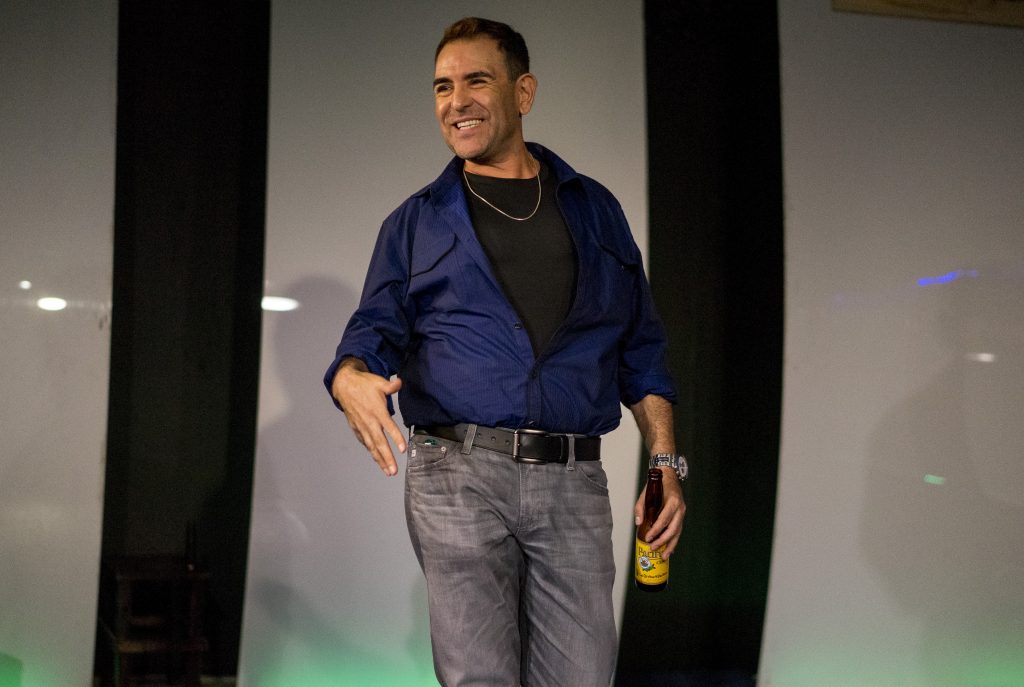 Yes, the play’s title is catchy, but it is misleading. It should be something like Men, Money and Power, because even though sex and drugs permeate each vignette, the dramas that unfold in front of the audience happen only because Bogosian’s men have or lust after the money to purchase these commodities and the power to exploit them.

Bogosian starts the tour of his masculine carnival sideshow with a British rock star being interviewed at the height of his fame, relishing every oblivious moment of it. Yes, he boasts of his five unblemished years (to date) of complete sobriety, yet he recounts the drug and alcohol-fueled parties of his earlier days with such avidity, it is hard to swallow the claim of his current abstinent conversion, and his little lecture to “young people” to avoid the behavior he has so extravagantly rehearsed is risible.

Feeling the need to use his position to do good, Mr. Rock Star gives concerts to benefit a remote jungle tribe in South America. During a vacation trip up the Amazon River, he and his cohorts encountered an encampment of aboriginals, introduced them to the joys of cigarette smoking, and now feel obligated to supply them with this indispensable commodity of Western civilization.

Macho man number two projects a much lower profile, speaking quietly and displaying a hint of self-deprecation. But soon we learn that all of his pride is centered in the size and prowess of his penis, his stealth weapon, an unfailing advantage over more dashing and prosperous appearing males in the seduction of females.

Next we encounter a young Italian-American party animal whose more benign, heavily accented, blue collar prototypes have populated American television series since Henry Winkler’s Fonzie on Happy Days. However, the harrowing drug and booze driven orgies Bogosian’s callow fellow and his buddies stage stagger the imagination, but he clearly lives only for the next weekend’s adventure. Bogosian’s play reveals four more equally endearing males—the philandering husband, the nouveau riche immigrant, the envious misanthrope, and the scary paranoid who believes we are being controlled by unknown forces that work through our ubiquitous microwave ovens—but I fear the readers of SanDiegoStory have neither the patience nor the stomach to endure further explicit description.

I should make clear that Raygoza imbued all seven of the play’s characters with such dramatic fervor and emotional intensity that his two hours on stage were nothing short of mesmerizing. Bogosian’s writing—opulent but tinged with colloquial accessibility—offers a gratifying feast, and Raygoza’s command of the text and his persuasive delivery proved symphonic in breadth.

A bare stage with the occasional chair for the actor helped keep the focus on each persona. Raygoza is credited with both the stage design and direction, and the latter was exemplary in every aspect.

In Sex, Drugs, Rock and Roll, Bogosian holds up a mirror to every notion and cliché that American culture celebrates as masculine.

Swagger will never be the same.

Ion theatre opened Eric Bogosian’s ‘Sex, Drugs, Rock and Roll’ at its BlkBox Theatre in Hillcrest on October 14, 2017, and continues through October 28, 2017.