San Diego Symphony Music Director Rafael Payare opened the 2022 – 2023 season at The Rady Shell on Saturday with a commanding, passionate performance of Giuseppe Verdi’s Requiem. With the San Diego Master Chorale, four operatic soloists, and the orchestra, this array of musicians easily filled The Shell’s capacious stage, but more importantly, The Shell’s state-of-the-art sound system faithfully communicated this torrent of glorious sound to the substantial audience at the Symphony’s exemplary outdoor facility. 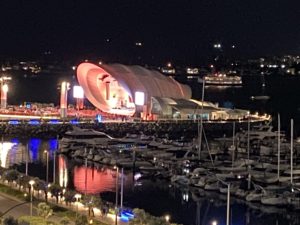 The Rady Shell at Jacobs Park

Payare and the orchestra gave an explosive, tumultuous character to Verdi’s setting of the “Dies Irae” (“Day of Wrath”), that threatening portion of the Requiem text to which the composer returns at various places in his extensive work. Verdi dramatically depicted musically the terrors of the Last Judgement, which the late medieval poetry of the “Dies Irae” describes, drawing on his acute perception of malevolence that he expresses so eloquently in Renato’s “Eri tu” aria in A Masked Ball and Iago’s Credo Aria in Otello.

Verdi’s illustrious contemporaries presented a strikingly different, gentler view of eternity. French composer Gabriel Fauré omitted the “Dies Irae” from his Requiem, substituting the gorgeous harmonies of the concluding section “In Paradisum,” and Brahms in his German Requiem gives us the blissful, comforting melodies of “How Lovely Is Thy Dwelling Place, O Lord of Hosts.” But Verdi’s calling card is intense supplication and the fear of the everlasting fire, a message the vocal soloists and Payare delivered with unreserved zeal.

Whether intoning the Kyrie’s quiet pleading, unleashing the fury of the “Dies Irae,” navigating the sturdy fugue of the “Te decet hymnus,” or extolling the exuberant lines of the Sanctus, the Master Chorale gave a vivid, compelling account of Verdi’s choral score. The last time the San Diego Symphony performed the Verdi Requiem with the Master Chorale, May of 2015 under guest conductor Murray Sidlin, John K. Russell had just assumed the post as Music Director of the Master Chorale. The Chorale’s performance at that time proved to be a veritable check-list of needed improvements. Today San Diego’s grateful music community can say to Russell: mission accomplished.

After years of assiduous vocal training and the serious recruiting of new members, the current Master Chorale has a younger membership, which helps build a more robust, supple sound; each section sports a more pleasing, unified sonority, and the sections now properly balance each other, although the tenor section remains the smallest section! Clearly, the Master Chorale of 2015 could not have performed the vibrant yet nuanced interpretation of the Verdi Requiem that Payare required.

Jennifer Johnson Cano’s gleaming mezzo-soprano brought operatic intensity to her solos, especially in the radiant “Lux aeterna.” I appreciated the stentorian Heldentenor power of Limmie Pulliam, who nevertheless maintained a rich Italianate timbre in his arresting opening salvo in the Kyrie as well as his majestic upper range declamation in the “Ingemisco” section of the Sequence. Baritone Aleksey Bogdanov proved the master of dark, haunting declamation in his “Confutatis maledictis,” and his overall phrasing proved exemplary. Soprano Leah Crocetto appeared to save the full force of her vocal prowess for the final movement of the Libera me, “Dum veneris judicare,” where she soared with such authority and vocal allure over the full orchestra and chorus.

Kudos to the orchestra for consistently meeting Payare’s mercurial but effective dynamic shadings, as well as his frequent insistence on brilliant fortes. The string sections sounded unusually robust, and the extra trumpets made the “Tuba mirum” not only glorious but, thankfully, perfectly tuned.

Large choral-orchestral works are usually programmed later in the season, often around religious holidays. Opening the 2022 – 2023 season with the Verdi Requiem was a splendid decision, showing the remarkable strength of two of San Diego’s premiere musical organizations. For those who missed traditional orchestra fare, do come back next weekend to hear Payare conduct Beethoven’s Fifth Symphony!

This concert was presented by the San Diego Symphony on Saturday, October 1, 2022 at The Rady Shell at Jacobs Park. It was repeated at the same venue on Sunday, October 2.