Not that long ago, program music was forced to ride in the back of the classical music bus. Only novices liked Smetana’s “Moldau” or the Richard Strauss “Till Eulenspiegel’s Merry Pranks,” while serious music aficionados appreciated the abstract geometry of symphonies, sonatas, and anything written in 12-tone technique. But once composers dispensed with the serialist straight-jacket, program music quietly returned to center stage.

Nature has served as this Adams’ constant inspiration—his orchestral work “Becoming Ocean” won the 2014 Pulitzer Prize in Music—and his deftly scored “songbirdsongs” (1974-1980) for two piccolos and varied percussion evokes vivid avian associations. Schick scattered four of Adams’ eight “songbirdsongs” movements on the program, opening with Not quite spring dawn and closing with Joyful Noise. Spring dawn sparkled with crisp chirps from the piccolos, accented with the delicate tingle of triangles, while serious drumming and the sharp clang of crotales created the more vivid sound collage as the program finale.

For the Haydn Symphony No. 6, Payare had his players perform standing—save the cellos, of course—which helped give this early Haydn symphony an unfailing energetic drive that still maintained its classical proportions. Payare’s tempos for Haydn and Mozart—we have heard quite a bit of Mozart this season—tend to the bright side, but the orchestra has consistently responded with clarity and solid ensemble playing that make his tempos work splendidly.

Principal Flute Rose Lombardo offered spirited solo passage work in the opening movement, the composer’s likely salute to morning birdsong, and in the second movement we 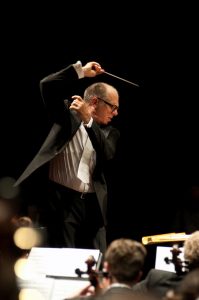 were treated to elegant dialogues between Concertmaster Jeff Thayer and Prinicipal Cello Yao Zhao, giving welcome dramatic flair to this symphony’s more subdued movement for strings alone. In the Trio section of the Menuet, we enjoyed an untypical duet, this time between Principal Bassoon Valentin Martchev and Principal Contrabass Jeremy Kurtz-Harris. Haydn’s music never lacks invention, and his ability to write thoroughly engaging duos for the lowest instruments of the orchestra provides unassailable testimony to the scope of his musical imagination. The vibrant final Allegro also abounded in sizzling solos for a number of first chair players, finishing this Symphony No. 6 performance with elan.

Rose Lombardo and pianist Tina Choong gave a scintillating account of Messiaen’s “Le merle noir,” a piece the composer completed in 1952 as a competition piece for the Paris Conservatoire; it is based entirely on the song of the blackbird. Messiaen acquired his interest in birdsong from his teacher Paul Dukas, becoming an orthinological expert on birdsong and using it in many of his compositions, even sacred organ music based on Catholic theology and liturgy. Because of its difficulty, “Le merle noir” is not frequently performed, so it was a privilege to hear such a confident, stylish account by Lombardo and Choong.

Schick conducted a riveting performance of Mazzoli’s “The Sound of Light,” an quintet for violin, trumpet, flute, piano and trombone. The composer has described her work as “a musical depiction of growth and transformation,” and its overlapping, urgent tonal themes create an invigorating, bracing soundscape. Upon reflection, her assertive quintet brought to mind the character of the opening movement of Messiaen’s “Quartet for the End of Time.”