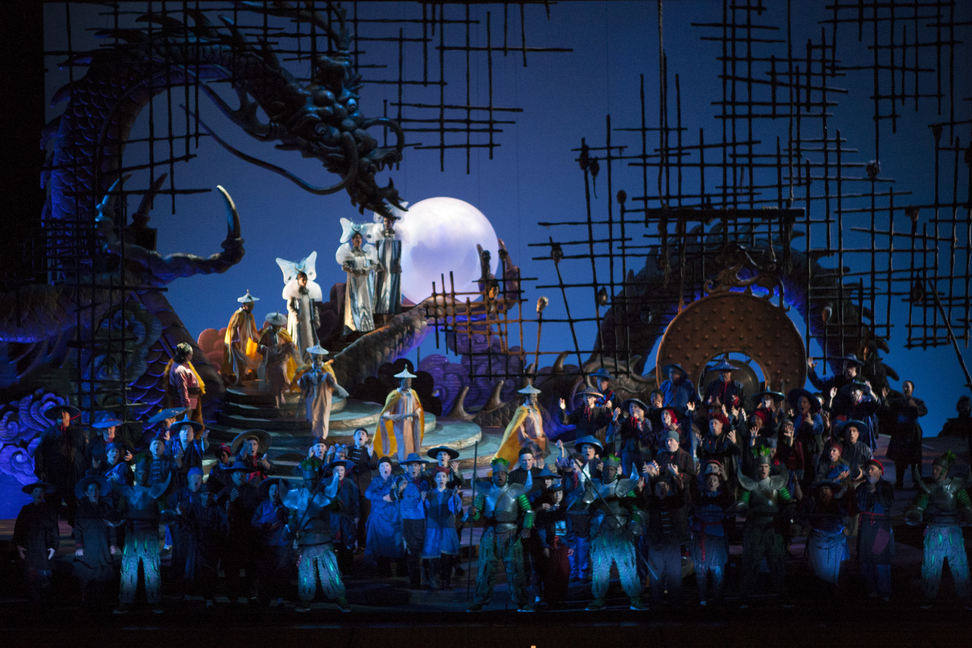 To start with, I found it amazing that Lindstrom made Turandot, one of opera’s most challenging roles, sound easy. With utter confidence she sailed through her stratospheric part over full orchestra, displaying her gleaming, well-focused vocal line and fusing intense emotional communication with chilling vocal precision. She beautifully calibrated the sound and demeanor of her ice princess from haughty supremacy, to combative disdain, to fearful apprehension, to eventual emotional capitulation to Calaf, the prince who finally answered her three trick questions in order to gain her hand in marriage. Those who know the story line know that Turandot beheaded every prince who previously failed the test—now there’s female empowerment! As Calaf, I appreciated Carl Tanner’s resonant heldentenor as he gave full flight to the composer’s arching vocal acrobatics. But he left me wishing that as Turandot’s smitten suitor he would display more of Lindstrom’s unstinting emotional focus. His familiar “Nessun dorma” aria, for example, offered some glorious phrases, but he did not build the requisite emotional crescendo that could support the aria’s victorious conclusion. In his third act duet with Lindstrom, “Principessa di morte,” his consistent ardent wooing of the crestfallen Turandot almost redeemed his performance, but Calaf is on stage much more that Turandot, and he must prove himself at every moment to make this tale from ancient China work. 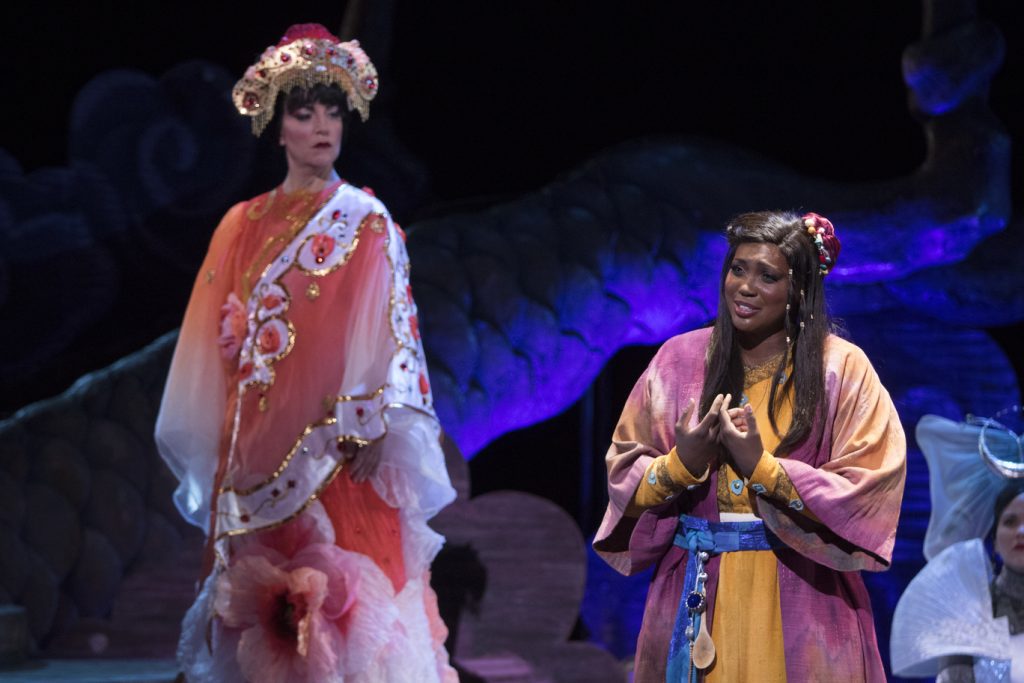 While Lindstrom has sung Turandot in some 40 productions—and she is still in mid-career(!)—this was Angel Joy Blue’s first Liù, a highly anticipated debut. With her commanding stage presence and an ample, alluring soprano, Blue’s performance made me wish I had seen her last Tosca or Violetta. She imbued her delicate slave girl with too much vocal prowess and command, not allowing us to see that Liù’s power is completely opposite to the kind of power Turandot wields—her power is that of sacrificial love, the mightiest weapon of the oppressed. In the opening phrases of Blue’s “Tù, che di gel sei cinta” we heard that lithe, silvery ardor she should have developed through the entire poignant aria instead of quickly shifting into the bolder vocal assurance of Violetta in “Sempre libera.” But have no doubt—Blue is a singer that opera mavens will soon be invoking passionately, even when her fees soar out of reach for San Diego Opera. At least we will be able to say, “Ah, we heard her when . . . “

Bruce Stasyna’s hearty chorus sang with uncompromising zeal, balancing power and polish as the situation required, and their patriotic hymns to the Emperor could not have been more thrilling. Making an auspicious debut on the podium, Valerio Galli chose tempos that always propelled the dramatic action without rushing the give and take of vocal line. He was not afraid to unleash the orchestra for brilliant climaxes, and the instrumentalists responded with muscular, well-balanced ensembles that gave the composer’s boldest score its due.

Stage Director Keturah Stickann plotted the dramatic pace judiciously and used the various spaces on the production’s single set cleverly, although the chorus placement appeared rather static. Once they piled onto the set, they seemed fixed in their spot.

The unit set by Bliss Herbert and Allen Charles Klein sported the look of a lavishly illustrated children’s fairy-tale book—the opera is based on Carlo Gozzi’s 1762 fairy-tale drama—with a grand, cascading stairway on one side that conveniently allowed for pompous entries. A clever eagle’s nest built into a high corner of the oversized foliage that framed the stage allowed the Emperor of China to proclaim edicts high above the milling crowds below him.

Lucas Krech’s magical lighting design added greatly to the set’s exotic aura, and his mixture of deep greens and blues in the slightly dimmed night scene vied admirably with the composer’s vivd orchestral scoring to cast an enchanting nocturnal spell. Willa Kim’s vividly hued (and often quite billowy) silk costumes delighted the eye all evening, although I thought Calaf’s odd outfit suggested a man below his princely status.

San Diego Opera opened this production of Giacomo Puccini’s “Turandot” on February 24, 2018, in the San Diego Civic Theatre in downtown San Diego. The opera will be repeated in the same venue on February 27, 2018 as well as March 2 & 4, 2018.