It did not take long for the story of Shakespeare’s Romeo and Juliet to morph into a symbol for the universal struggle of young lovers. Playwright Jordan Seavey in his 2016 opus Homos, or Everyone in America wants us to find a parallel universality in the tumultuous affair of two young gay Brooklynites. 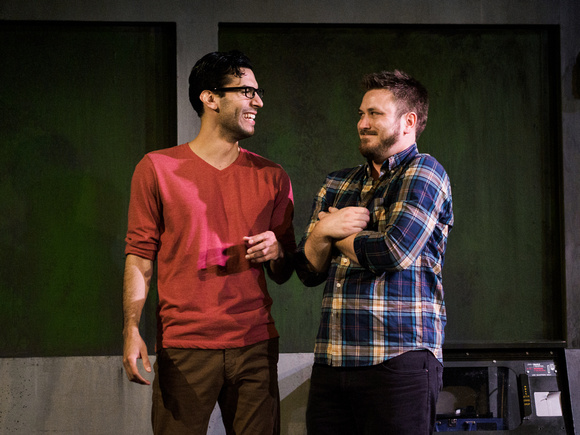 Seavey’s protagonists are a writer, played by Jacob Caltrider, and a graduate student, Alexander Guzman, who remain–unlike the other two secondary characters in his play–unnamed. Their first meeting, romance, jealousies, fights, confessions, and crises are not related in either a chronological progression or in carefully orchestrated flashbacks, but in a kaleidoscopic rush of tiny, non-linear incidents that require the audience to construct its own timeline.

From Diversionary Theatre’s printed program we learn that all the events take place between 2006 and 2011 in Brooklyn, but cause and effect remain elusive to any audience member not wholly attuned to Seavey’s brisk, combative dialogue. In retrospect I see this technique as the playwright’s way of pulling the audience into both the play’s and the couple’s dramatic tension, a canny counterbalance to the soporific soap opera expectations that too many romantic tales incite.

With sharp wit and breathless tempos—think Harold Pinter on speed—writer and graduate student rehearse nearly every leftist argument about race, gender, power, and privilege, usually forging such views into an accusation of transgression by the listening partner. For instance, when the writer pointedly asks if Dan, a handsome new “friend” his partner is seeing, is black, the graduate student sharply accuses him of “objectifying black men.”

Yet Seavey has created approachable, sympathetic individuals out of these loquacious verbal gymnasts, and both Caltrider and Guzman bring ringing emotional depth as well as empathetic vulnerability to their roles. As the “other man” in this gay relationship, Michael C. Louis’ Dan walks that fine line between surface flirtation and seductive intention, a necessary compromise to an underwritten part. Andrea Agosto’s effusive empathy as Laila, a department store sales clerk to whom Caltrider makes his secular confession, brings a winning cameo to this male dominated play.

Matt M. Morrow’s swiftly-paced, incisive direction makes a virtue of the almost bare stage, immaculately designed by Kristen Flores: props and scenery would only impede the velocity of the play’s emotional cyclone. And Morrow has the actors pop up in nearly every corner and aisle of the small Diversionary venue, keeping the audience closely bonded to this Romeo and Romeo duo. Kevin Anthenhill’s sharp sound design gave us a perfect moment New York subway clangor for a crucial scene, and his original music avoided queasy soap opera cliché, although a quoted snippet of Vivaldi revealed the modest scope of Anthenhill’s score.

About the sweeping universality implied in Seavey’s Or Everyone in America title I remain warily agnostic. Of course I want to believe in its universal application to romantic forays of every stripe, and I imagine the audience at, say, San Diego’s Cygnet Theatre responding with equal enthusiasm to that of Diversionary Theatre’s wildly excited opening night audience. But how will this play in Colorado Springs or Birmingham, Alabama?

Kudos to Morrow for bringing this electric new play to San Diego. I have not been as impressed with a Diversionary production since Chay Yew’s astounding Porcelain.