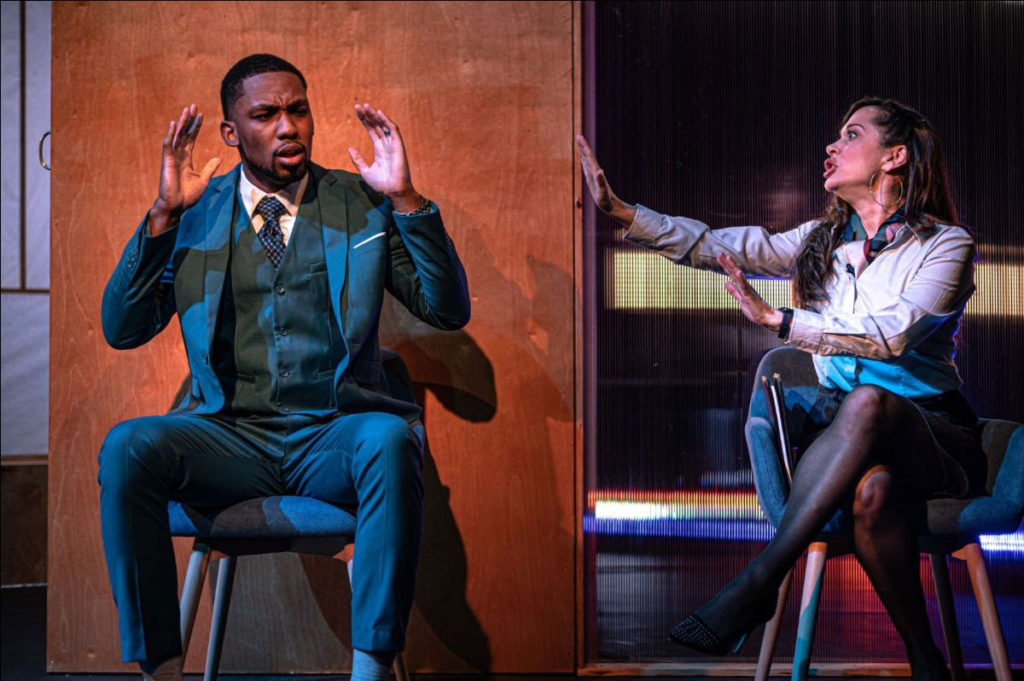 It must be difficult to create a story out of subject matter that many audience members might not fully understand. However, Backyard Renaissance’s wonderful production of the comedy-drama, Dry Powder, accomplishes this by making the world of private equity compelling.

The story begins in the aftermath of a controversial incident involving the CEO of KMM Capital Management, Rick (Javier Guerrero). During the day, many supermarket workers were laid off, from a chain owned by KMM. That same day, Rick hosted an expensive engagement party to celebrate his upcoming second marriage.

Playwright, Sarah Burgess, moves the plot along at a fast pace, with many situations occurring over an almost 90-minute runtime. Her dialogue is often smart and funny, which keeps viewers engaged even when the events become increasingly complex. And the tale becomes more suspenseful as the stakes between KMM and Landmark Luggage rise.

The cast plays Burgess’ characters with plenty of conviction. John and Guerrero chillingly portray two souls who are so consumed by work, that they do not bother to think about the harm their actions may cause others. Both performers authentically display the dark personalities of Jenny and Rick.

Piggee is just as believable as the more empathetic Seth, especially in the founding partner’s interactions with Landmark Luggage’s CEO, Jeff (James Hancock III). While Seth is far from a perfect person, Piggee is likable depicting him with a caring persona.

Complimenting Burgess’ writing and the acting, is the work from Artistic Director, Francis Gercke, and a few of the crewmembers. Gercke’s direction, Jonah Gercke’s filming and Rachel Eubanks’ editing are all equally important to the interpretation, and their collaboration creates a high energy tone for the video presentation. In addition, Tony Cucuzzella’s set, at the Tenth Avenue Arts Center, and Joel Britt’s lighting, convincingly depict a handful of locations, from the office of KMM to a casual bar.

Although Dry Powder deals with a dense topic that some might find hard to completely comprehend, Burgess’ clever storytelling and standout contributions from the cast and crew keeps the evening wickedly entertaining. The show is so well executed, that I hope another rendition from Backyard Renaissance is produced when live theatre resumes.

Dry Powder is available for viewing tomorrow through Sunday.