If a chatty person sitting next to me on a cross country flight started explaining how computers were going to improve the performance of Beethoven’s music, I would probably request a flight attendant to seat me elsewhere in the cabin. But at Sunday’s (August 16) La Jolla SummerFest concert, members of the Borromeo String Quartet demonstrated unequivocally how instrumental the computer can be to provide performers access to the composer’s interpretive instructions. 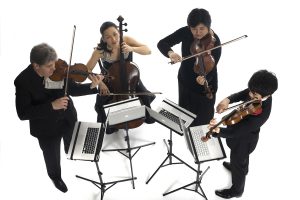 In its depth and complexity, some claim that Beethoven’s monumental String Quartet in B-flat Major, Op. 130, stands in relationship to his other 15 string quartets in similar fashion as does his Ninth Symphony to the other eight symphonies. But when the music publishers of Beethoven’s time engraved this work for publication, they seriously simplified his complex scheme of dynamic gradations and articulations, robbing the quartet of its subtle, kaleidoscopic changes.

In a 30-minute lecture before performing the work, Borromeo first violinist Nicholas Kitchen described how he and his colleagues went back to Beethoven’s original manuscript for Op. 130 and decided to perform directly from it, which is where the computers come in. Reducing the bulky manuscript to a series of sequential images on a computer screen (a foot control changes the screen as the music progesses) allowed Borromeo to observe every subtlety of the composer’s instructions.

It was nothing less than astonsihing to note how different Borromeo made Op. 130 sound: instead of that driving force most ensembles bring to Beethoven, Borromeo released each movement’s buoyant internal propulsion. These players uncorked Beethoven’s champagne, and it proved a most worthy celebration. With the exception of the grand fugue at the end, the quartet was an exercise in understatement, a quieter but no less joyful exposition of thoughts that would prove valedictory.

Borromeo saved its assertive attacks and muscular dynamics for the fugue, which made its climax to the quartet even more telling. I appreciated the shimmer of Kitchen’s sonority and the way he led with both authority and restraint. Second violin Kristopher Tong matched Kitchen’s sound and articulation with uncanny equality, and violist Mai Motobuchi revealed surprising strength and bold contours in more expansive moments. In spite of cellist Yeesun Kim’s austere, exterior calm, she displayed a wide array of colors and textures that kept the ensemble’s sonic architecture in immaculate balance.

The concert opened with the rarely heard Piano Quintet in C Minor, Op. 1, of Ernst von Dohnányi, featuring pianist John Novacek. The esteemed Hungarian composer was indeed a prodigy, and no less than Johannes Brahms pulled strings to have the 17-year-old’s work premiered in Vienna. The SummerFest ensemble, led by violinist Phillip Setzer offered a polished and serious account of this effulgent, late Romantic piano quintet, although I thought its technique overwhelmed its substance. This may be the reason we rarely hear it.