Employing the theme of the intersection of classical music and folk traditions, the San Diego Symphony offered a varied chamber music program Wednesday at The Conrad in downtown La Jolla. Guest artist Wu Man, the pipa virtuoso extraordinaire, was featured in both solo and ensemble format, and two different string quartets comprised of players from the orchestra filled out this eclectic program. 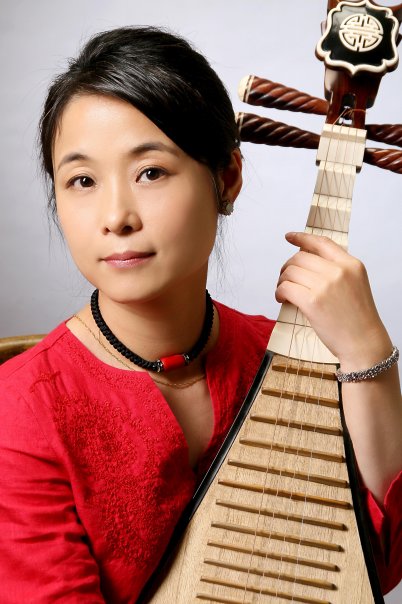 Seated stage center, Wu Man opened the program with four solos for the pipa, a traditional Chinese lute that projects a bright, slightly nasal timbre, unlike the much quieter sound of the lute that flourished in Renaissance Europe. She explained that her first piece “Little White Moon,” a gentle, transparent, impressionist nocturne, comes from the vicinity of Shanghai on the East China Sea, where she is from.

An exuberant traditional dance replete with virtuoso figurations that displayed her fleet technical prowess was followed by a piece from Kazakhstan on China’s western border that sounded almost tonal, unlike the decidedly pentatonic initial pieces. Her flashy final solo selection featured a more vigorous plucking technique which, she noted, can sound like a banjo to western audiences, so she has given it the humorous nickname of “My Chinese Banjo Piece.”

Wu Man served as a featured soloist in Australian composer Ross Edwards’ 2020 Four Inscapes for Flute, Pipa, Percussion, Violin and Cello. The composer’s attachment to nature is evident in his movement titles “Inscape with Frog and Bird” and “Floating Moon.” Principal Flute Rose Lombardo and Principal Percussion Gregory Cohen gracefully incarnated Edwards’ lithe birdsong and discrete frog sounds of the first movement, and Wu Man was given a second chance to apotheosize the moon in “Floating Moon.” Edwards turned to dance for his other two movements, choosing pipa and percussion to dominate his rousing finale “Ritual Earth Dance.” Ai Nahira Awata and Chia-Ling Chen provided the work’s lyrical violin and cello parts.

In the U.S., the early decades of the last century experienced a significant revival and appreciation of American folk music. Seeking a wider audience to appreciate her own sophisticated musical style, African-American composer Florence Price applied her considerable technique to several American folk songs in her suite for string quartet titled Five Folksongs in Counterpoint.

Price chose well-known spirituals for the outer movements, “Calvary” and “Swing Low, Sweet Chariot,” and these two are the gems of this suite. In “Calvary,” Price gives each member of the quartet a chance to reveal their interpretation of the mournful theme, but cellist Andrew Hayhurst stood out for his rich yet plaintive account, although violist Ethan Pernela came in a close second. The poise and finesse of violinists Kenneth Liao and Ai Nihara Awata helped bring Price’s contrapuntal fantasy on “Swing Low” to the suite’s riveting climax. I must admit that I chuckled when I heard how Price cleverly turned the modest tune “Shortnin’ Bread” into a snappy scherzo, but I fear no one could redeem the saccharine miners’ ballad “Oh My Darling Clementine,” which Price fashioned as the suite’s slow second movement.

Musicologists are still arguing about the musical sources of Antonín Dvořák’s F Major String Quartet, Op. 96: American. He wrote the string quartet as a result of his two-year stay in the United States, teaching in his conservatory in New York City and summering in the Czech immigrant community of Spillville, Iowa. Some hear the echoes of American music in the composer’s themes, and others find nothing atypical about these musical ideas of this Czech nationalist composer par excellence.

Regardless of which side of the argument convinces you, the F Major String Quartet remains one of Dvořák’s most appealing works, and the musicians assembled Wednesday—violinists Jing Yan Bowcott and Julie Pautz; violist Abraham Martín, and cellist Nathan Walhout—gave a persuasive, deeply considered account of the work. I was particularly impressed with the ensemble’s vibrant Scherzo and the lithe lyricism they maintained throughout the exuberant Finale.

This concert was presented by the San Diego Symphony on Wednesday, March 30, 2022, in the Conrad Prebys Performing Arts Center in downtown La Jolla.