Last week the Russian-German pianist Igor Levit made the news by winning the coveted Gilmore Artist Award, a $300,000 prize awarded to a pianist every four years. On Sunday, January 7, the New York Times ran an extensive article about the prize and Levit’s heady admixture of political advocacy and performance, highlighting his recording of avant-gardist Frederic Rzewski’s Variations on the “Marseillaise” of Chilean Leftists, “The People United Will Never Be Defeated.” 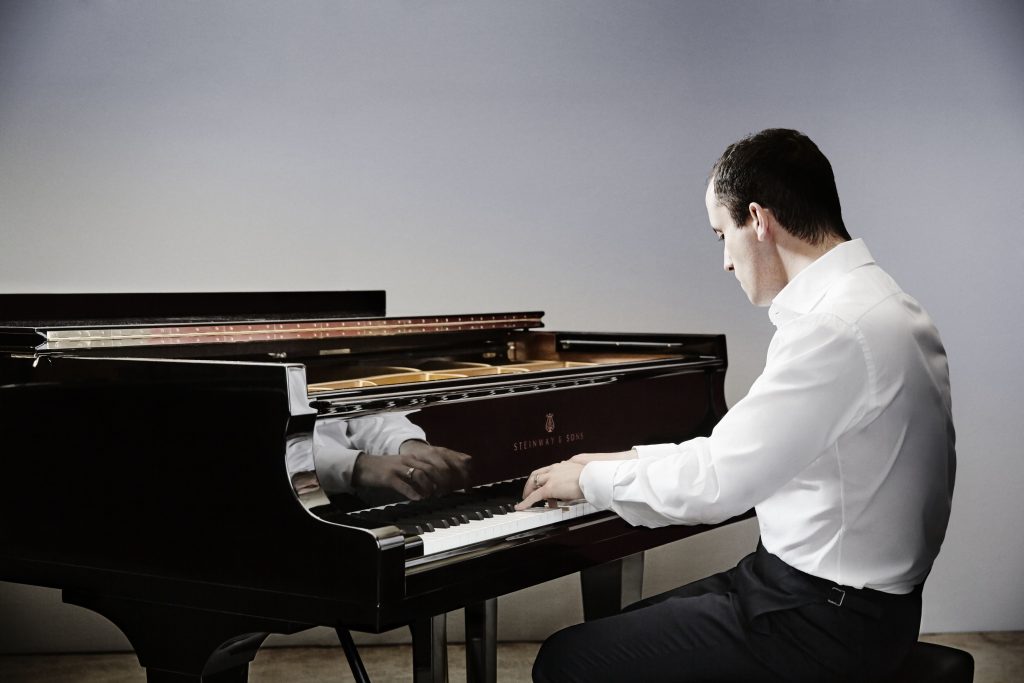 Levit’s solo recital Sunday for the La Jolla Music Society at the Auditorium at TSRI had nothing to do with either polarizing political statements or music as avant-garde as that of Frederic Rzewski. It was a serious, at times somewhat dour, recital that began with Levit’s meticulous account of Brahms’ scrupulous transcription for the left hand of J. S. Bach’s D Minor Violin Chaconne and culminated with Ferruccio Busoni’s monumental transcription of Franz Liszt’s virtuoso organ solo, Fantasia and Fugue on “Ad Nos, ad Salutarum Undam.”

What makes Busoni’s transcription so challenging is having to add the bass line—which the organist plays with his feet on the pedal clavier—to the left hand, which Liszt has already given more than enough enough to do in the organ score. In a quiet, easy-going piece such as Dame Myra Hesse’s iconic transcription of Bach’s “Jesu, Joy of Man’s Desiring,” this feat sans feet is accomplished with moderate ease, but the Liszt Fantasy and Fugue is an entirely different animal. And Levit delivered it with astonishing prowess.

Getting from Bach to Busoni, however, was something less than a heavenly journey. Levit followed the D Minor Chaconne with five Preludes and Fugues from Dmitri Shostakovich’s Op. 87, a collection of preludes and fugues in all the major and minor keys written in homage to J. S. Bach’s Well-Tempered Clavier. Some of the Russian composer’s preludes and fugues strike me as inventive, but by 1950, when Shostakovich wrote this collection, his style had progressed from the chipper neoclassicism of his younger composing days, and his attempt to revive this approach to composition in Op. 87 seems stilted and hollow. By the time Levit started the fourth of his five preludes and fugues, it took significant discipline to concentrate on Shostakovich. Levit’s insightful use of touch, dynamic contrast, and choice of color presented these preludes and fugues in their most appealing guise, but it was insufficient. Shostakovich may have honored Bach’s style, but he clearly did not come close to Bach’s spirit.

That Robert Schumann’s Variations in E-flat Major on an Original Theme (“Geistervariationen”) are rarely programmed is not surprising. Written in 1854 during the last stages of the composer’s metal collapse, these variations are dutifully structured but rather vacant. Like the Shostakovich offerings, Levit’s attentive, deft performance of Schumann’s variation cycle only served to expose its deficiency.

I do not recall hearing Franz Liszt’s transcription of “Solemn March to the Holy Grail” from Richard Wagner’s opera Parsifal performed on a recital. Levit gave this processional an apt, solemn, pace, graced with the pious decorations of the “Dresden Amen” theme. Its placement after intermission prepared the audience for the challenging journey of Liszt’s own tumultuous Fantasia and Fugue that filled the remainder of the program.

This recital was presented by the La Jolla Music Society on January 7, 2018, at the Auditorium at TSRI. The organization’s next recital on its piano series will be Pierre-Laurent Aimard on March 1, 2018, at the Balboa Theatre in downtown San Diego.