As frequently as Mainly Mozart Music Director Michael Francis reminds his audiences that the 2018 season is the festival’s 30th anniversary, he reveals at every turn that business as usual is not his calling card. Sunday’s concert (June 10) featured the Festival Orchestra augmented by some 15 musicians from the Mainly Mozart Youth Orchestra paired with seasoned virtuosi from the Festival Orchestra; a concerto commissioned by Mainly Mozart, and a post intermission session in which guest pianist Derek Paravacini took themes and requests from the audience on which he improvised. 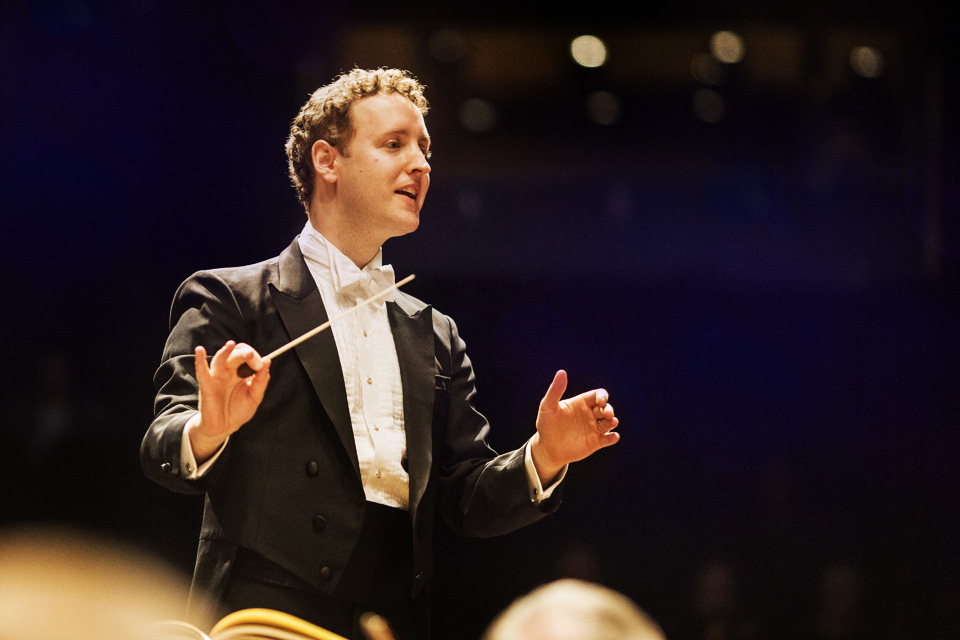 For Sergei’s Rachmaninoff’s “Vocalise,” the program opener, the additional strings from the Youth Orchestra gave the Festival Orchestra an unusually lush, satiny sonority that could not have been better suited to the composer’s effulgent style: urgent, dramatic surges capped with dreamy themes. Francis certainly appeared delighted to work with this larger ensemble, and I cannot recall a more pleasurable account of this endearing piece.

For the opening movement of Mozart’s Symphony No. 35 (“Haffner”), the extra players proved too much of a good thing. An orchestra of 50 playing Mozart overpowered the modest Balboa Theatre, although in the more capacious Copley Symphony Hall, this number probably would have been just right. Francis and the musicians gave a disciplined, athletic account of the Allegro con spirito from this familiar Symphony—the Festival Orchestra will perform the entire “Haffner” Symphony on Saturday, June 16.

Mainly Mozart Concertmaster Martin Chalifour brought out the mystical allure of Ralph Vaughan Williams’ “The Lark Ascending,” his shimmering pianissimos in the highest register soaring gracefully with consummate ease. Like Samuel Barber’s “Adagio for Strings,” this Vaughan Williams piece is beloved even by folks who ceaselessly complain about 20th-century music, and Chalifour, along with the Festival Orchestra, displayed both its charm and structural sophistication.

Accomplished British composer Matthew King wrote his Piano Concerto for Derek Paravicini, who premiered the work with fire and panache. King’s style struck me as essentially neoclassical, built on edgy, closely-spaced chordal textures and spiced with minimalist iterations here and there. For contrast, King made the middle section a slow blues ballad and colored the final Presto with mildly syncopated Latin rhythms. King’s opening movement rondo developed with sections of increasing complexity, giving Paravacini ample opportunity to display his menacing technique that raced through the most complex figurations with dazzling agility and power.

With the Festival Orchestra, Paravicini offered as his encore Jimmy Van Heusen’s song “Call Me Irresponsible.”

Paravicini opened the second half of this Mainly Mozart concert with his version of “Tiger Rag,” a work written by another blind pianist of note, Art Tatum. As Paravicini invited requests from the audience, many of the pieces on which he improvised came from the Great American Songbook, e.g. “Puttin’ on the Ritz,” “Fly Me to the Moon,” “As Time Goes By,” and “Summertime,” although he did not flinch at turning out his version of “Lady Madonna.”

Notable was an improvisation based on four random notes shouted out from the audience, which he turned into a blues ballad over a walking bass, and his clever retort to an audience member who blurted out “play Beethoven’s Fifth!” He took the famous opening four-note motif and created a lively jazz etude out of those notes. With a nod to his British heritage, he also played the traditional hymn “Jerusalem” and ended his lengthy set with the Beatles’ “Let It Be.”

This concert was presented by Mainly Mozart in the Balboa Theatre in downtown San Diego on Sunday, June 10, 2018. The Mainly Mozart Festival continues through June 24, 2018, at this venue and at other San Diego County locations.