I first heard pianist Daniil Trifonov play in January, 2015, when he was accompanying violinist Gidon Kremer in a recital for the La Jolla Music Society. During that recital it did not take long to perceive that the role of accompanist was inadequate—to say the least—for this young Russian virtuoso, and Trifonov was back in La Jolla three months later playing a recital of his own. 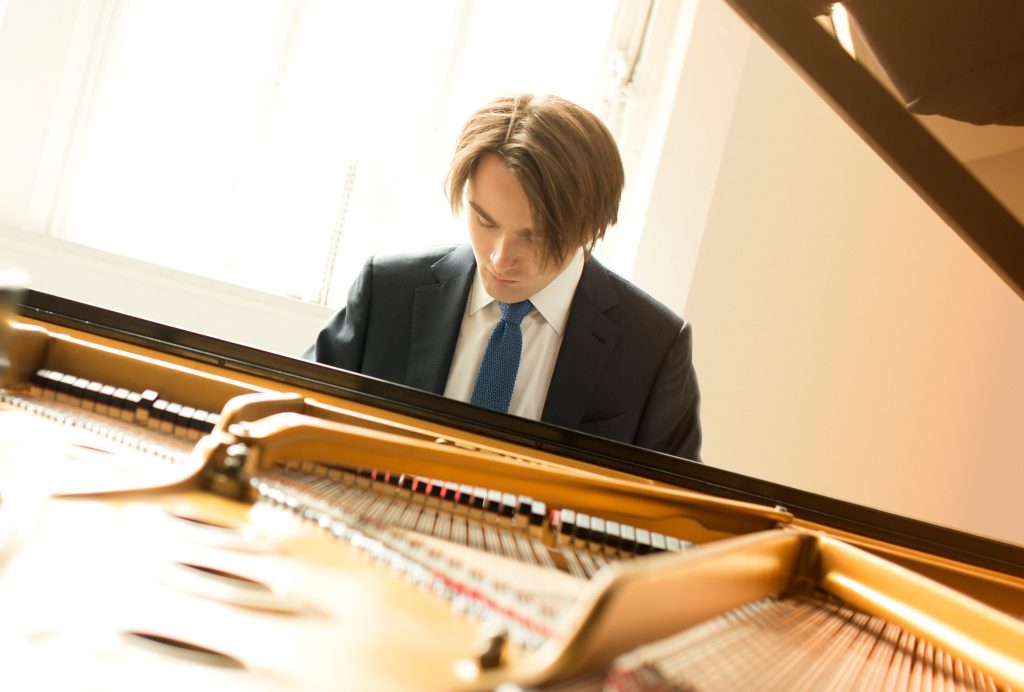 Since 2015 he has returned to the La Jolla Music Society several times for solo recitals, as well as a memorable performance with cellist Alisa Weilerstein in Tchaikovsky’s Piano Trio during the 2021 La Jolla SummerFest. Thursday he returned to The Conrad on Fay Avenue in La Jolla to play a nonpareil program of Tchaikovsky, Robert Schumann, Mozart, Ravel, and Scriabin. It is no exaggeration to state that his program offered some of the most difficult pieces in the piano repertory, although—perhaps to mitigate the potential insinuation of hubris in such a daunting selection—Trifonov opened his recital with Peter Ilych Tchaikovsky’s Children’s Album, a set of 24 pieces written for children.

Although Tchaikovsky used as his model Robert Schumann’s Scenes from Childhood—pieces that every child who has ever studied piano has learned—I confess that I had never heard Tchaikovsky’s Children’s Album performed before Trifonov played it Thursday. To Trifonov’s credit, he gave each of these 24 miniature pieces their precise touch, phrasing, and dynamic shading, gliding gracefully from one to another like a suave Olympic figure skater.

But once he launched in Robert Schumann’s Fantasy in C Major, Op. 17, he entered virtuoso-only territory, and he remained there throughout the remainder of his recital. Schumann’s Fantasy, Op. 17, brilliantly manifests the composer’s manic-depressive character in daunting, complex musical language that changes character wildly and impulsively. This clearly appeals to Trifonov, and he mastered Schumann’s vibrant contrasts with apparent ease. With consummate command he transitioned from the crashing tumult of pounding dense chords sporting fistfuls of notes to the serenity of shaping winning themes that could have easily found their way into a lieder cycle. Trifonov’s deft account of the middle movement march allowed the listener to hear either the confidence of military prowess or the preening vanity of military pomp—or both!

Maurice Ravel’s Gaspard de la nuit is frequently cited in music history texts because of the composer’s fascination with and masterful depiction of the macabre, but the work’s extreme technical difficulty—Ravel clearly intended his piece to be the pianists’ Mount Everest—keeps it off recital programs. I do not expect to encounter a more compelling account than Trifonov’s Gaspard de la nuit, and describing his performance as a tour de force seems woefully inadequate.

As Trifonov effortlessly sustained the shimmering textures of “Ondine,” Gaspard’s opening movement, he lightly signaled Ravel’s barely surfacing, evanescent themes—like highlights in an Impressionist painting viewed at a distance. In “Le gibet” (“The Gallows”), Trifonov was able to conjure the terror of the second scene of Verdi’s opera  A Masked Ball employing the subtlest of dynamic shadings throughout. Furious leaps and wild themes only hint at the bizarre nature of the mythical creature depicted in “Scarbo,” the final movement, and Trifonov wisely threw caution to the wind as he conjured this demon.

By the time Trifonov finished the Ravel piece, the audience had been intensely engaged with his performance for nearly 2 and 1/2 hours, but he still had Alexander Scriabin’s Piano Sonata No. 5 in F-sharp Major on the program. Perhaps it was the case of wanting to open with a Russian composer in a gentle, even whimsical mood and to end with a Russian composer invoking the tumultuous, mysterious forces of the universe. In a way, Scriabin’s sonata collected all of the most difficult technical aspects heard in the rest of the program and distilled them into a single cataclysmic movement.

After his stunning Scriabin Sonata, there was clearly nothing more for Trifonov to say musically, but he gave in to the enthusiasm of his audience and offered a single encore: an arrangement of J. S. Bach’s “Jesu, Joy of Man’s Desiring.”

This concert was presented by the La Jolla Music Society on Thursday, November 10, 2022, in the Conrad Prebys Performing Arts Center in La Jolla.