Canadian conductor Peter Oundjian brought a well-matched program of John Adams and Gustav Holst to the San Diego Symphony Saturday (December 3) at the Jacobs Music Center. Because he chose Adams’ recent “Doctor Atomic Symphony” and his Holst selection was “The Planets,” Oundjian cleverly titled his program “Adams, Atoms and Planets.” 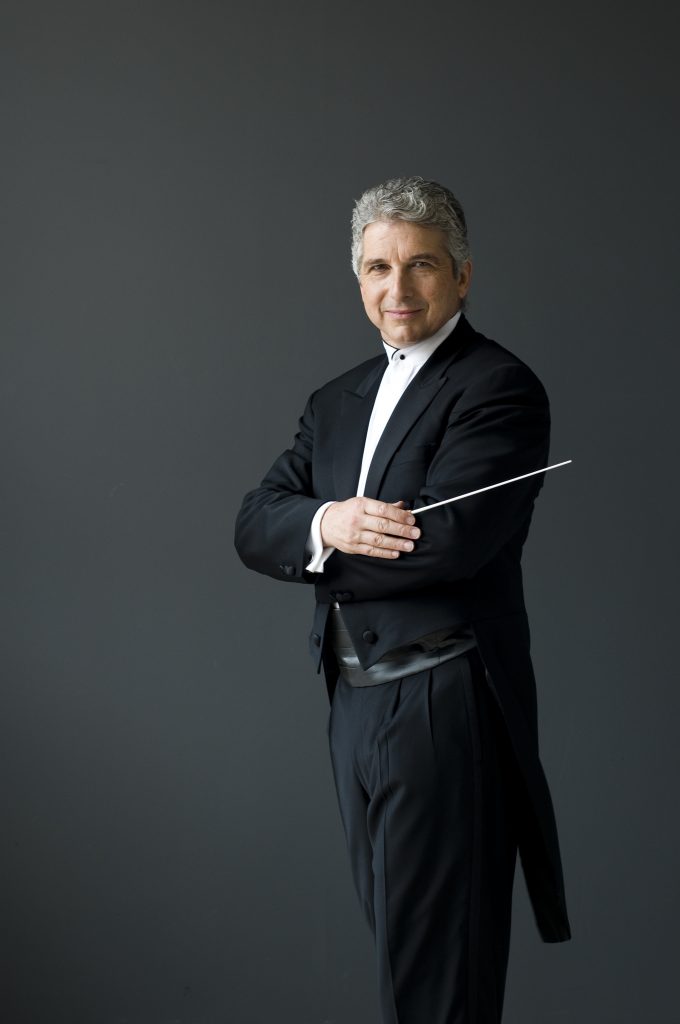 Fiercely demonstrative on the podium but relaxed and genial speaking to his audience, Oundjian elicited sparkling, dramatic performances from the orchestra and was rewarded with generous applause from the audience. He could be a smashing Music Director for the San Diego Symphony—2016-17 is maestro Jahja Ling’s final season—were Oundjian not already entrenched as Music Director of both the Toronto Symphony and the Royal Scottish National Orchestra.

Two years after the successful debut of John Adams’ 2005 opera Doctor Atomic, the composer took portions of the score and fashioned a three-movement orchestral work that he has unsurprisingly titled “Doctor Atomic Symphony.” There is respectable precedent for this: Sergei Prokofiev’s 1928 Third Symphony is laced with themes and scenes from his earlier opera The Fiery Angel, and in the 1930s, Paul Hindemith composed a symphony titled “Mathis der Maler,” which he conveniently expanded into his 1938 opera of the same name.

Doctor Atomic narrates the climax of the Manhattan project—testing the first atomic bomb in the New Mexico desert during the last days of World War II—but interlaces these events with the intense moral quandaries experienced by the project’s leading scientists and generals. I was fortuante to attend performances of San Francisco Opera’s premiere production and a subsequent production by the Metropolitan Opera, and I can affirm that Doctor Atomic is a powerful, compelling stage work.

With its cacophonous overlay of dark brass fanfares and bracing, ominous percussion, Adams’ powerful “Doctor Atomic Symphony” certainly captures the opera’s portentous mood and unrelenting moral apprehension. This sweeping, 25-minute work does not, however, lay out the opera’s dramatic framework in the manner that, say, various Carmen Suites recount that opera’s plot, although I would be surprised if Adams entertained such programmatic intentions when composing his symphony. If Adams’ opera has a hit tune, it is his setting of John Donne’s poem “Batter my heart, three-personed God” that J. Robert Oppenheimer sings and Adams gives to a solo trumpet in his symphony. Yes, the father of the atomic bomb admired the poetry of John Donne, and “Batter my heart” was his favorite sonnet among the works of the 17th-century metaphysical poet and Church of England cleric.

Adams’ vibrant, kaleidoscopic orchestration made incessant demands on Oundjian, and he met them with vigor and clarity at every turn, making a masterful case for this new work.

Because Adams trusts his lean, incisive themes primarily to the brass and woodwind sections, he gives the strings that secondary role most composers delegate to the winds. San Diego Symphony’s brass sections could not have been more splendid! Principal trumpet Micah Wilkinson’s lyrical flights in “Batter my heart” soared, but he also demonstrated a brilliant array of contrasting colors and attacks that Adams called for throughtout the score. Other soloists who exhibited laudable muscle and polish included Principal Trombone Kyle Covington, Principal Horn Benjamin Jaber, and timpanist Ryan J. DiLisi.

Oundjian’s resplendent account of Holst’s “The Planets” pulled out all the stops, but he deftly paced the work to allow the quieter, less familiar movements to work their magic between those frequently played, excerpted, and brashly imitated blockbusters “Mars” and “Jupiter.” An unusually supple “Venus, the Bringer of Peace” glowed warmly, offering suave solos by Jaber and Associate Principal Cello Chia-Ling Chien. I admired Oundjian’s solemn “Saturn, the Bringer of Old Age,” with its excellently paced crescendo undergirded with the organ’s pungent bass rumble. Offstage, the women of the San Diego Master Chorale added their diaphanous voices to the closing movement, “Neptune, the Mystic,” an ethereal conclusion to a work that enters with the aggressive military onslaught of “Mars, the Bringer of War.”

This was a performance of “The Planets” to be remembered and savored.