The music of the late but much honored Polish composer Krzysztof Penderecki may be better known to American movie aficionados than by symphony patrons. His menacing music has underscored such classics as The Exorcist and The Shining, to mention only two of the many films that have relied on his muse. 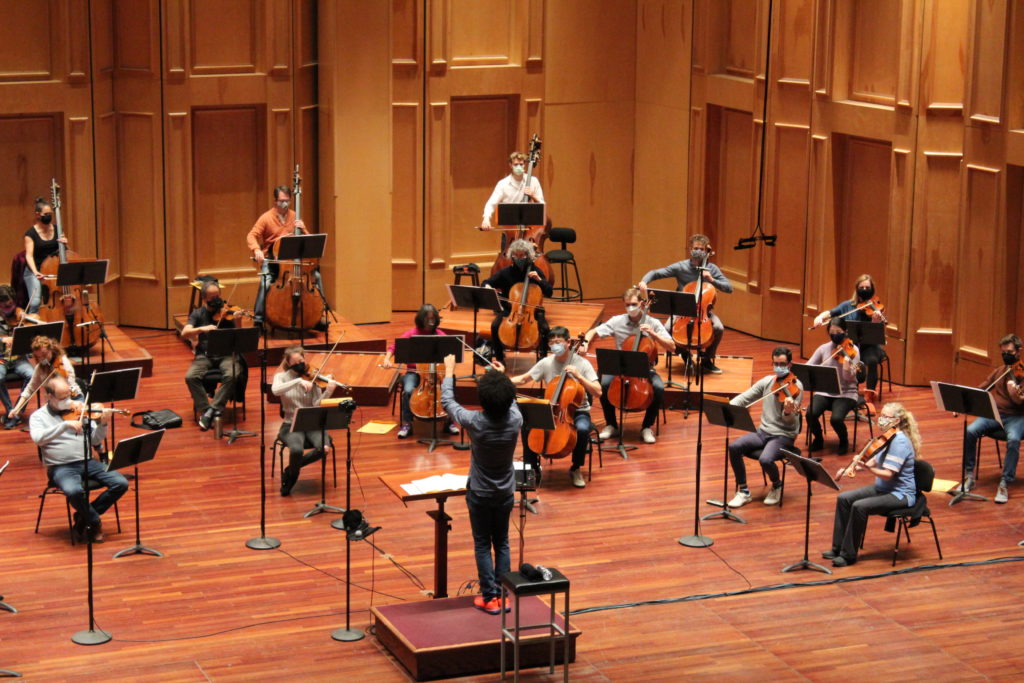 In Friday’s streamed concert from the Jacobs Music Center, San Diego Symphony Music Director Rafael Payare brought Penderecki’s 2013 “Adagio for Strings” to online audiences. A glowing meditation that encompasses both lament and aspiration, this deftly structured “Adagio” brims with the composer’s distinctive, austere lyricism, which Payare and the Symphony strings delivered with exceptional assurance and finesse.

Concertmaster Jeff Thayer’s silvery sonority and adroit definition uplifted the several solo violin passages the composer weaves throughout the piece, and Associate Principal viola Nancy Lochner and Principal Cello Yao Zhao handled their shorter solo forays with equal prowess. This “Adagio for Strings” has an indirect motion picture connection: the composer crafted this work for strings out of the slow movement of his Third Symphony, which Martin Scorsese used in the soundtrack of his 2010 film “Shutter Island.”

Payare has included Mozart on each of his monthly 2021 programs, and I don’t believe that the ease of performing Mozart’s music with smaller ensembles is the reason. The maestro has a winning approach that makes rather everyday Mozart compositions such as Friday’s “Divertimento in B-flat for Strings,” K. 137 or February’s “Serenade for Winds,” K. 388, stand out with unexpected substance. His Mozart displays the perfect balance of exuberance and discipline, qualities that made the Allegro di molto, the fast middle movement of the “Divertimento,”  sparkle with apt elation.

Antonin Dvořák’s “Serenade for Strings in E Major,” Op. 22, was written five years before the Tchaikovsky “Serenade for Strings,” which Payare and the Symphony played last month. Each Serenade offers abundant mellifluous themes for every section of the orchestra, and audiences respond favorably to these ingratiating works. I find Dvořák’s slow movement, the Larghetto, with its wistful, beautifully arched phrases more persuasive that Tchaikovsky’s parallel movement, the Elegy, but it is hard to surpass the panache of the Russian composer’s opening movement.

The orchestra gave a splendid account of this Serenade, sounding warmer and a bit more vibrant online than they do in Copley Symphony Hall. Or perhaps they are simply improving under Payare’s tutelage. If—and when—we return to the Jacobs Music Center, we will be able to judge. Until that time, everyone who loves the Symphony is grateful for these monthly streamed concerts.