At times I have wondered what Samuel Beckett’s iconic existentialist play Waiting for Godot would be like as an opera. Attending Clint McCallum’s new opera Paradise TBD at Bread & Salt Friday came dangerously close to encountering that unlikely transformation. 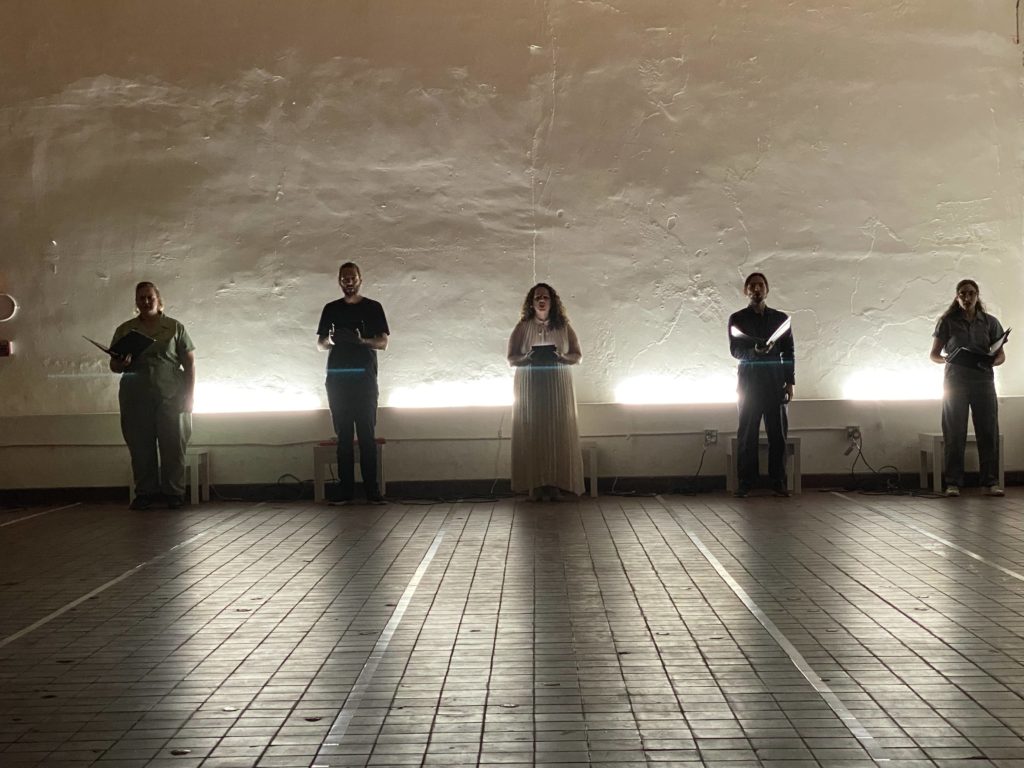 For opera aficionados who attend San Diego Opera’s Civic Theatre productions—or the operas of any other major company—Project [BLANK]’s Paradise TBD will likely challenge expectations: it has no elaborate set with period costumes, no orchestra in the pit, and no chorus surrounding the lead singers. The opera’s five vocalists are accompanied by an entirely digital score controlled by the composer at the computer, and McCallum’s sonic template that handily accompanies his singers owes much to the early works of Karlheinz Stockhausen and nothing to those of Giacomo Puccini.

Yet as Paradise TBD unfolded at Bread & Salt, I kept thinking that this is probably how the sophisticates in 1598 felt at the Florentine Camerata as they experienced the first opera performance, Jacapo Peri’s Dafne, with its bold, exciting amalgam of drama and singing that unleashed unexpected emotional power.

McCallum’s score requires singers with powerful voices that can sustain extended bravura arias that dazzle the audience—something the composer does have in common with Verdi and the bel canto masters. Soprano Mariana Flores Bucio’s vocal tour de force that explained her character’s heroic survival of the catastrophic 1985 Mexico City earthquake, for example, proved as revelatory and dramatic as Violetta’s celebrated “Sempre libera” from La Traviata.

Jonathan Nussman gave his pivotal character, the British officer Samuel Savage stationed in late 18th-century India, the perfect combination of exterior bravado and interior trepidation, confidently communicated by his accomplished yet genial baritone. Like Beckett’s Vladimir and Estragon, he is waiting for a revelation to arrive that will alleviate his existential desolation. He wails, “There must be something else!” at the close of the opera’s first half.

Unlike Beckett’s characters, Savage does not have a tree to console him—just a raft on which he finds himself stranded in what his three fellow travelers pronounce with absolute certainty is simply infinity.

Anishka Lee-Skorepa’s formidable dramatic soprano gave bone-chilling authority to her character, a cocky, street-wise survivor of hurricane Katrina’s 2005 devastation of New Orleans. Tenor Miguel Angel Zazueta could have used more vocal heft as a street performer who barely survived the 1931 floods in Wuhan, China. Mezzo-soprano Leslie Ann Leytham soared through her daunting, text-free melismas as an ill-defined character called Nowhere, “a being outside of time and place singing by herself in infinite nothingness,” according to the printed program notes. Fortunately, we enjoyed ample vocal allure in all of that nothingness.

In the opera’s second act, the raft-dwellers improvise an unprovoked trial, at which Officer Savage confesses to a long-suppressed war crime, only to be told that the trial was not about him. If the reader is imagining this opera ends with a decisive moral teaching such as the snappy fugato at the close of Don Giovanni or a brazen conclusive action such as Tosca’s fatal leap from the parapets of Castel Sant’Angelo, the reader has clearly boarded the wrong train.

Given Bread & Salt’s black box configuration, I applaud director Robert Castro’s decision to have each actor move in their own lane of the five lanes clearly marked on the floor of the very deep staging area. His clever, practical conceit of having each singer stand on a short moveable platform, not unlike a wooden box an orator in a free-speech park might use, happily compensated for the lack of a stage. Although the performers were on book (or tablet) throughout this  long opera, this did not noticeably impair their communication with the audience.

Music Director Brendan Nguyen and composer McCallum at the computer appeared to share responsibility for the agreeable pace and direction of the opera, which lasted two and one-half hours with a short intermission. Elba Emisente’s varied, sharply defined lighting scheme clarified transitions and effectively compensated for the lack of scenery.